Unfortunately, Fighting Fantasy Legends Is An Exercise In Frustration

Sidequest was provided with a copy of Fighting Fantasy Legends for MacOS in exchange for a fair and honest review.

I decided to play Fighting Fantasy Legends because I misread the title and thought it was a Final Fantasy card game on Steam. It’s not either of those things. Fighting Fantasy Legends is marketed as a card game but is actually a point-and-click tabletop RPG. (Apparently, it is actually based on a tabletop RPG, which would have been helpful to know.) And after the first few hours, where you’re struggling to figure out just how to play this game, it’s a lot of fun. Unfortunately, it was disappointing in the long run. 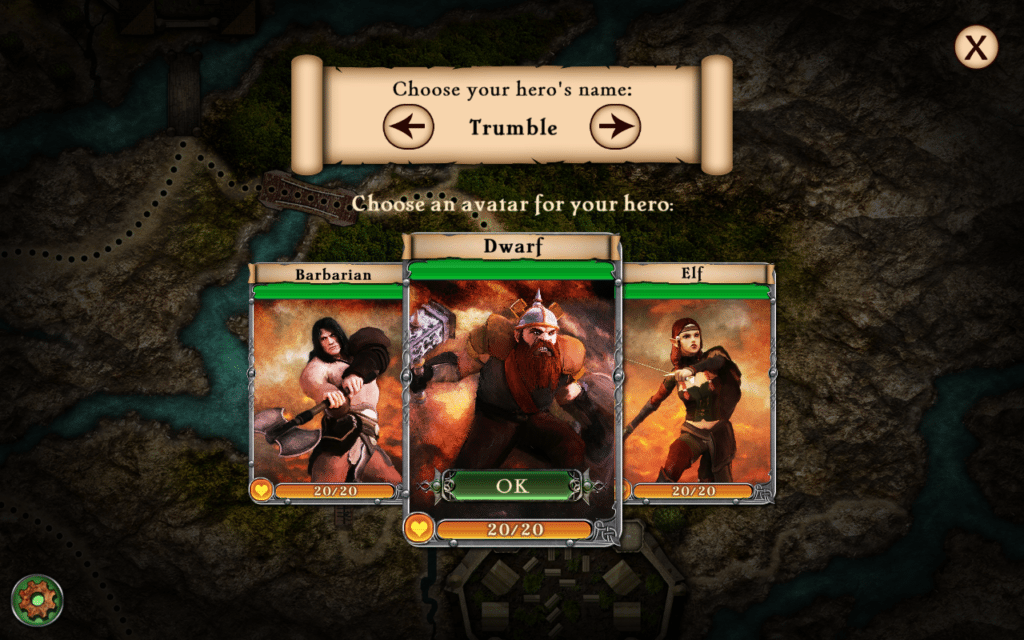 You begin by choosing your character—a dangerous dwarf, an elegant elf, or a bulky barbarian. Yes, I chose those descriptions for alliteration purposes. Unfortunately, the starting screen does not inform you as to the benefits of these races, so here I am to tell you: apparently, the dwarf gets free healing in some cities; the elf gets a bandage when you visit a (nice) wizard in his tower; and the human gets discounted armor from the silversmith. None of these mean anything until you play the game, which also isn’t helpful. 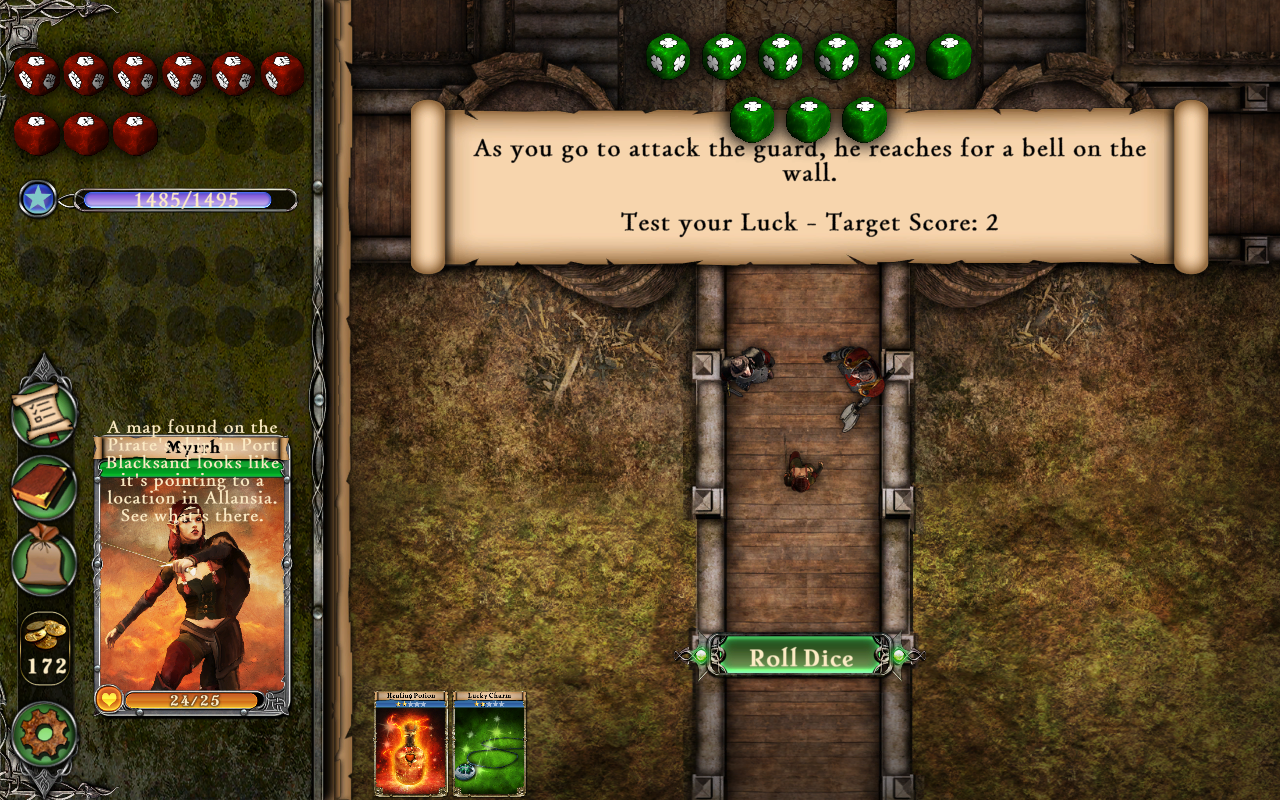 The dice are necessary for two reasons: luck/skill rolls, which resolve events, and battles. There are bonus armor and weapon dice that you can use in battles, but you only get one of each.

Then, the screen tells you to pick your starting stats—the number of dice to use in your skill/luck roles, which affects your stamina, and your beginning trait boost. At this point, you have no idea how any of this might or might not be important, except vaguely, so here is my suggestion: don’t skimp on either die choices. I went with 9 and 9, starting at 18 stamina, and decided to go with the gain XP mod. Leveling up gives you opportunity to update your dice (another thing you don’t know yet), so it’s worth it.

This game doesn’t give you any sort of tutorial, which would be fine if you knew anything about the game going in. Unfortunately, I didn’t, which left me irritated and confused.

All right. After choosing your character from meaningless information, you begin at the town of Silverton, which gives you your first quest: stop the evil wizard plaguing the town by going to the nearby city of Port Blacksand and meeting with the wizard Nicodemus. This opening sequence gives you some idea of what the rest of the game will be like: you click on options the text presents you and are given quests to complete. You’re also given a sword and some gold at the beginning, which imply some form of combat and the ability to buy things.

So after struggling with the lack of instructions in these first ten or so minutes, I found myself in Port Blacksand. Blacksand is a city you return to over and over again, and it’s the only one that you can actually enter and explore. That bummed me out. There is a lot of opportunity for interesting twists in this game, and this is one avenue where it’s not taken.

Going through Blacksand, generally, is an interesting beginning test of morality—something Fighting Fantasy Legends is fond of coming back to. Blacksand is home to pirates, thieves, murders, and other plunderers, you’re told as you come to the gate. This is where your first real choice of the game happens: the guard asks you what you’re doing coming in uninvited. 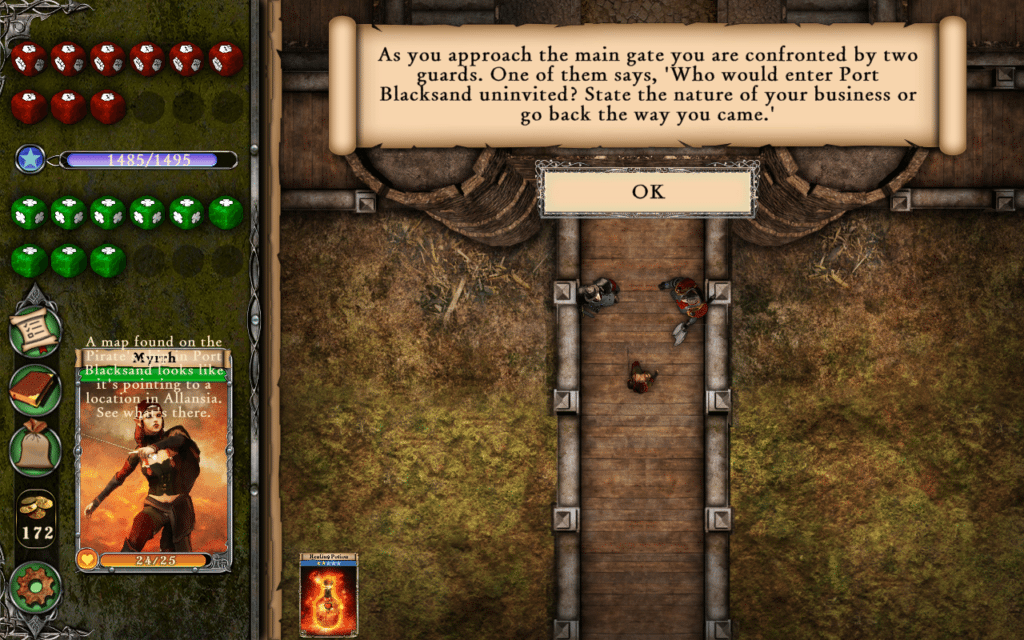 You have to go through this sequence every time you enter Blacksand. Every. Time.

The game has several instances where it presents choices for which you don’t know the consequences. This is the first. You can tell the guard the truth, that you’re here to see Nicodemus; lie and tell him that you’re selling booty, keeping in line with the theme of the city; or attack him. Attacking the person is always an option in this game. Depending on your choice, some more answers open up. I decided to be a savvy elf and tell him that I was trying to sell cursed chalices, so he waved me inside.

As I mentioned, Blacksand is one of the few areas that you can actually explore, making it one you return to multiple times. You can click through the city, going into some houses, deciding whether or not to kill people, buy various things. At the city’s halfway point, you find the hut that Nicodemus lives in, and he tells you what you need to go about helping Silverton—and thus, unlocking the next few quests and the rest of the game. 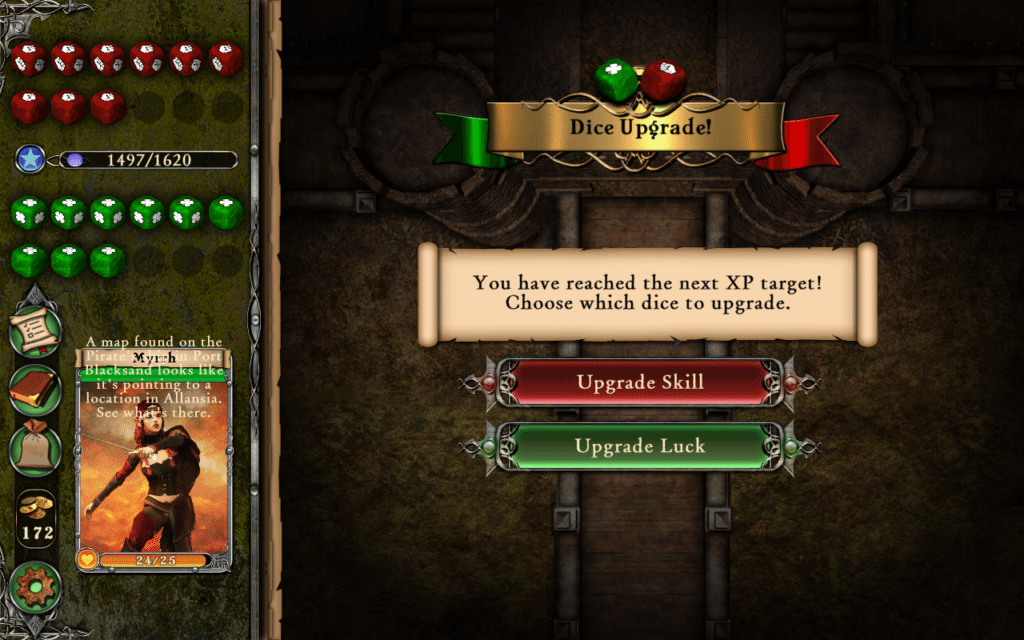 Rather than getting more dice, you can just upgrade the ones you already have. This ends up being really useful.

The actions of the game depends on whatever choice you click and how your dice roll. As you gain EXP and levels, you get more sides to you dice, thereby increasing the chance of a successful roll. You get cards to represent defeated monsters and acquired items.

Oftentimes, you see floating question marks in an area that you enter. This triggers a random event, usually—but not always—a battle with a baddie. I enjoyed this element of the unexpected and unknown. 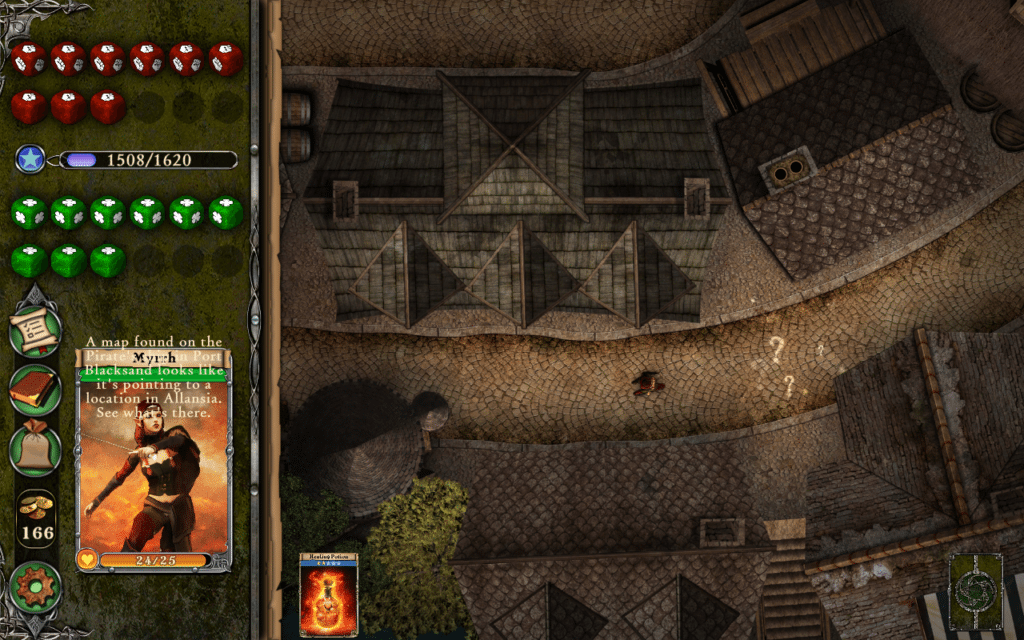 These question marks are always in the same places of the game, so they’re never a surprise.

Unlocking new titles for your character was a small and fun addition. I liked seeing who my character would become—The Hero of Firetop, Dragon-Slayer, The Clumsy. These added a fun, vaguely personalized feel to the game.

Unfortunately, this list is longer than I’d like. The first is that you don’t get to type in a name of your choosing—you have to choose from a set list, depending on your race. The next is the lack of explanation for anything, which I’ve already explained above. And, for some reason, in the latest update, I have the text of one of my quests stuck to my character’s card.

Sure, these are minor things, but the actual gameplay is also similarly frustrating. For example, battles. Why isn’t there an auto-battle option? After the initial attack, where you can possibly use items, you’re just clicking the screen to roll the dice. This is a silly waste of time, especially for the baddies that have more than 10 health—sorry, stamina. 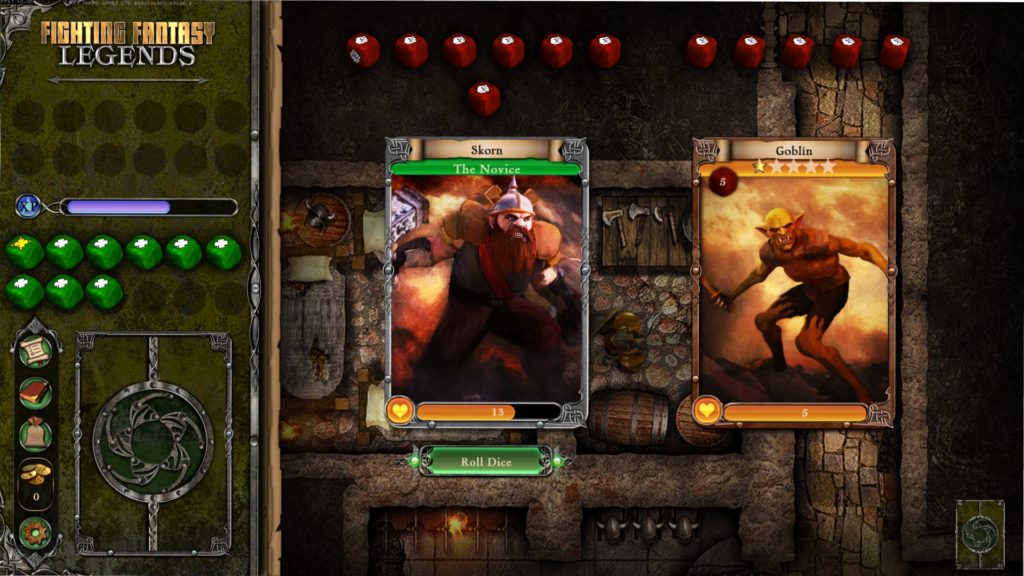 You press “roll dice” until you either win or lose. Pointless.

There is no ability to backtrack in this game. This is usually irrelevant, except when you’re in Blacksand or any of the game dungeons—which is the bulk of the gameplay. Are you kidding me? If you mis-click, you have to redo the entire area to get back to where you want to go. If you want to go to multiple areas but can only access them from one location, you can only go to one of them at a time before having to start the area over again. This is such poor game design and frustrated me so much that I almost put the game aside before I really got started. Given the repetitive nature of each area, this was especially frustrating. How many times in a row did I go into Blacksand just to get one item at a time? How many times did I have to redo Fire Mountain because I mis-clicked on which direction to go? 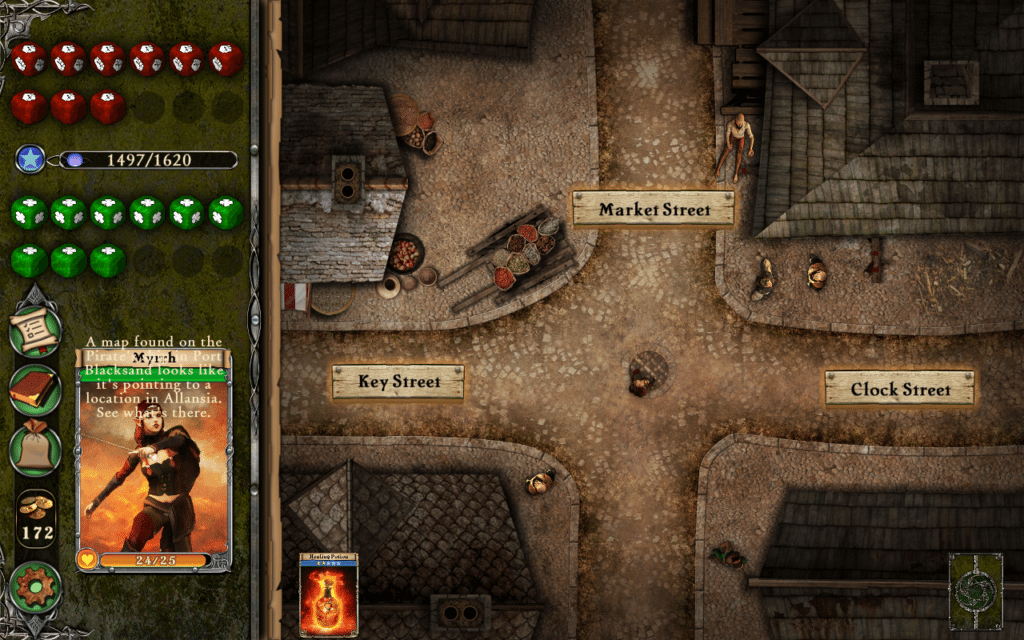 Choose wisely, since otherwise, you’ll have to go through the whole city again just to get back to this choice.

Hardcore gamers may scoff, but Final Fantasy Legends is too new to have a comprehensive walkthrough, which makes it frustrating at best. There’s an item guide on Steam, which is helpful to some extent, but there are some items and titles that you can only unlock if you correctly guess the sequence of choices the first time. How are you supposed to know these? You’re not. If you approach the Dark Tower and don’t kill the butler, for instance, you don’t get the unicorn shield—which I’m guessing is amazing, but I wouldn’t know, because I decided to be nice to the guy. And since you can’t access the Tower once you beat whichever evil wizard it is that time, if you don’t do this the first time, you’re out of luck. Great. No way to get 100 percent on things, then. 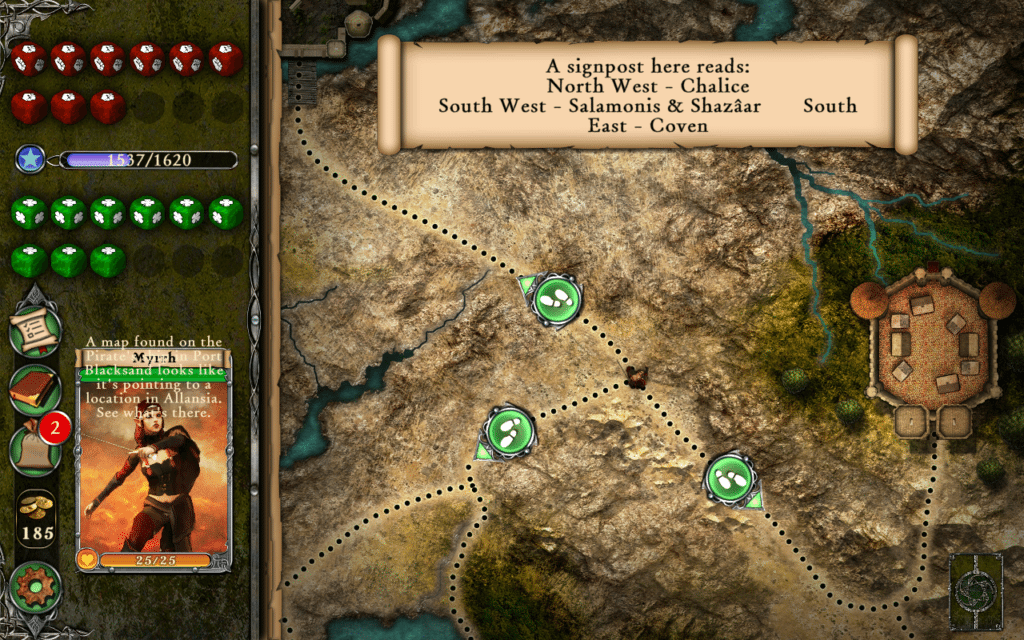 Wow, all these cities to explore! … except that you can’t go inside any of them, except to heal.

It takes about 2-4 hours to get into Fighting Fantasy Legends and actually enjoy it. I beat the game, in its current form, in six. In that time, I could have done a few dungeons in Windwaker or significantly moved along the plot in Final Fantasy Tactics, the other games I’m concurrently playing. To me, that’s borderline unacceptable. I don’t need a game to handhold me, but I don’t want to get so frustrated by the lack of instruction that I don’t want to play it anymore.

If you’re familiar with the Fighting Fantasy Legends RPG, this game might be a ton of fun for you. Certainly, the more I played, the more I enjoyed it. On the Steam community boards, those that really loved it are the ones that knew it from the tabletop days. But otherwise? I’m sorry to say that I don’t recommend picking up Fighting Fantasy Legends, unless you want an exercise in frustration.