On Dream Daddy, Authenticity, and Games by Queer Creators

The pitch for the Dream Daddy dating simulator was simple: play as a queer daddy who gets to romance other, much hotter, queer daddies.

With “dadbod” entering our social lexicon, calling hot celebrities “daddy” a common online occurrence, and “daddy” being very much a type within the gay community, it’s clearly an idea that struck the right chord for many; the official Dream Daddy Twitter has over 75,000 followers, and it made Steam’s top ten best sellers list in the first week of its release. Fandometrics, a database that tracks Tumblr trends, reported that Dream Daddy dethroned Overwatch as the most talked about game on Tumblr, after Overwatch had held that spot for nine months. A month after Dream Daddy’s release, and it already has a massive outpouring of fan art, cosplay, and community support.

And the game itself is indeed notable in numerous ways. It’s not often a dating sim comes along where one, you play as a man, two, you play as a parent, and three, you play as a queer parent who romances other queer parents. Of the seven romanceable dads, at least three are noticeably men of color. One dad is overweight, and another dad is confirmed by the creators as trans. When the game opens you find out that your dad has recently lost a spouse, and you can specify whether that spouse was male or female, and whether your daughter is biological or adopted. The game, by and large, has less to do with romance, and more with you learning how to handle your grief and social anxiety and, well, be a good dad. Laura Hudson at Wired writes, “It’s a subversion of dating sims that is not just the best dating sim I’ve ever played, but also one of the best games of the year.”

Dream Daddy has certainly received effusive praise for being a soft and sweet depiction of male romance. On the flip side, should it be hailed as the most revolutionary visual novel of the year? The game has not been without its criticisms. For all its emphasis on queer daddies, the game does not actually ever specify any dad’s sexual orientation, and all self-identifying words like bi, gay, and trans are noticeably absent. While “daddy” certainly plays off a gay archetype, and while it’s that very archetype that marketing jokingly riffed off of, that’s not really what the game engages with. Tim Mulkerin at Mic points out:

As a gay man, I found Dream Daddy’s lack of explicitly queer language incredibly frustrating…Dream Daddy’s biggest failing is that it doesn’t feel like a game made for or by gay people. It doesn’t capture the experience of what it feels like to be a gay man and fails to engage with or invoke gay culture in a meaningful way.

Kenneth Shepard at Paste had similar comments, noting that the game’s date-initiating mechanism–where you message the dads platonically through Dadbook, a Facebook analogue–is out of step with the gay dating experience:

You don’t hang out with these men under the pretense of romance, but through your shared experiences as fathers, several of which come from previous relationships with women, which begs the follow-up question of why anyone in this game assumes the other is at all interested in men without at least bothering to confirm. Using social media to try and confirm a crush’s sexuality before pursuing is yet another side of dating in a gay scene that Dream Daddy skips over.

It’s perhaps important to note that neither of the Dream Daddy creators share the same orientation and identity as their characters. The game was published by Game Grumps’ Vernon Shaw and Leighton Gray; Vernon Shaw is a straight man, and Leighton Gray is a queer woman. Although both of them call themselves “dads” on Twitter often, neither are fathers, much less queer fathers who have personally experienced the gay dating scene.

It raises the question of authenticity: how do we view works where the creators share the same marginalized identity as their characters, versus when they’re writing outside their own experiences? While researching dating sims featuring gay male romances, I found that many of the mainstream titles–as found on Steam and the Apple app store — were created by women and/or straight men, and were categorized as “yaoi” or “boys love,” a niche market that is often viewed as catering towards women. Even Coming Out On Top, a raunchy gay dating sim that was brought up as a more realistic response to Dream Daddy, was created by a woman. Is this disparity due to the perceived lack of queer men playing romance sims? Or is it more because the gaming industry in general is resistant to diversity, and it’s difficult for queer folks to break in and tell their own stories? In a video game field that still lacks diversity behind the scenes–a survey by the International Game Developers Association found 80 percent of developers identify as straight–it’s important to examine these trends and figure out how we can move forward from here.

It’s undeniable that Dream Daddy is important, even with its various issues. Given the game’s widespread publicity and reach, Dream Daddy kickstarted a conversation around representation in video games that smaller indie games may not have achieved as of yet. It’s given marginalized fans a mirror through with they can see themselves reflected back with sincerity and empathy. “The kind of response that feels the best for me is when people say to me, ‘Hey, I’m trans and this game made me feel accepted and I’ve never had a character that I could relate to that is…a fully three-dimensional character,” Gray told THR. It shouldn’t be denied that Dream Daddy is and will continue to be important for a lot of people, and that having more gaming options featuring queer protagonists can only be a positive thing.

But in light of the valid criticisms of the game, it’s as equally important to acknowledge that Dream Daddy can’t be everything for everyone. And when there’s so many queer creators out there churning out their own content about their own identities, it really shouldn’t have to be. In the young adult fiction world, a movement called #OwnVoices was started as a way to boost stories about marginalized characters created by marginalized authors. Perhaps we can do a similar push in video games. Continue making your Dream Daddy fanart and fanfics, but please, if you enjoyed the game, consider supporting these queer visual novels made by queer creators as well. It’s just a start, but hopefully in a few years the field will be even more diverse than it is today. 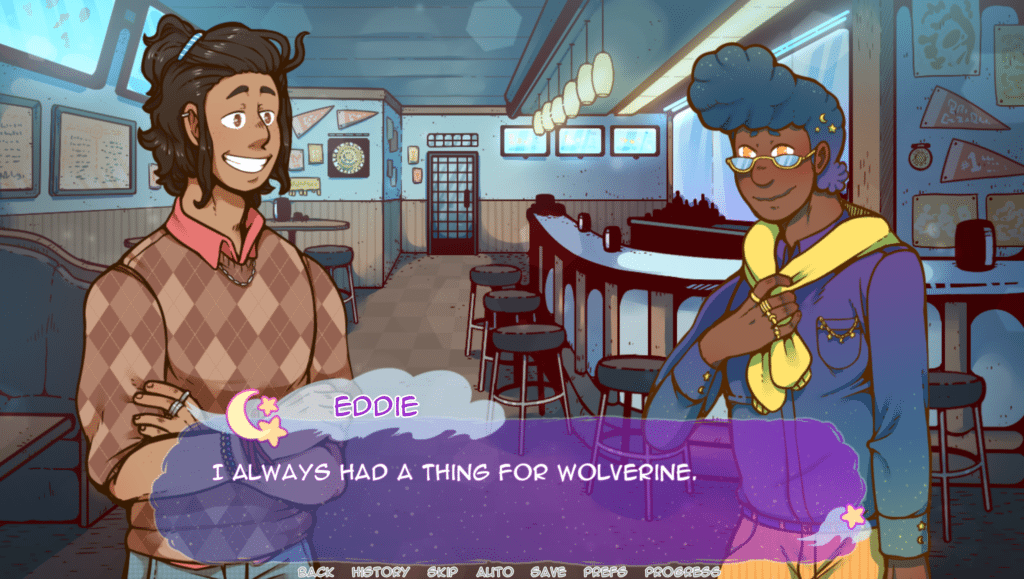 A Werewolf Opportunity, Obviously is about Eddie, a werewolf boy who’s just trying to get his love life sorted out. The game is still in demo, but the initial meet-cutes happen because Eddie bravely tries out speed dating at a local bar. The game introduces you to five different potential love interests, and each guy leaves a distinct impression on the socially awkward Eddie. The art is gorgeous and the dialogue is geeky and endearing. The creators expect a Spring 2018 release, where they promise you can play a PG-13 version or an R-rated one. –-Clara Mae Ladykiller in a Bind
Love Conquers All Games

Ladykiller in a Bind, from Analogue: A Hate Story and Digital: A Love Story developer Love Conquers All Games, is a visual novel about social manipulation, queer people doing terrible things to one another, and the negotiations of power and consent. It’s also a game in which a straight man can’t comprehend why a queer woman has short fingernails, to which a lesbian says, “God, you are so fucking straight.” This sometimes dark, always hilarious take on visual novels is exactly the kind of media queer folks can produce–brilliantly, effortlessly, and problematically human.  —Melissa Brinks 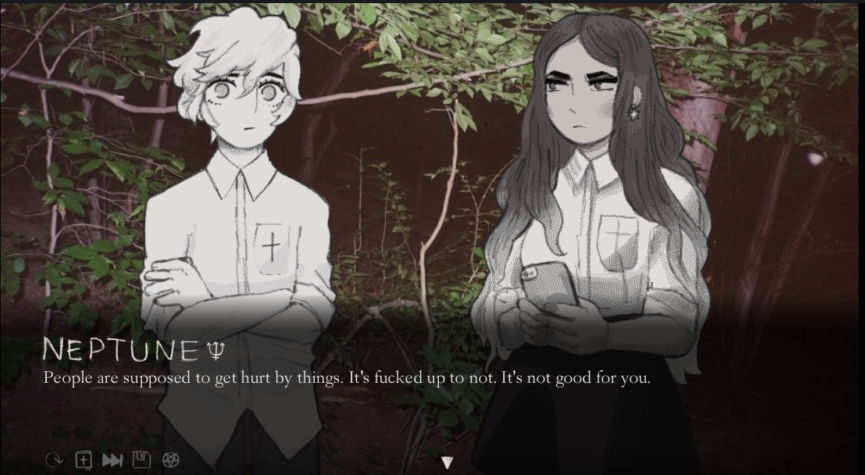 We Know the Devil
Date Nighto

We Know the Devil is one of those rare games that’s wholly unique. It’s a visual novel, certainly, but this story of queer teens at a Christian summer camp who must literally fight the devil is less interested in conventions than most. Without giving too much away–this game is most enjoyable when you’re coming to it with no idea of what it’s trying to do–it’s less about what you choose and more about what you don’t. It’s a little creepy, dark as hell, and fascinating in every conceivable way.  –M.B. 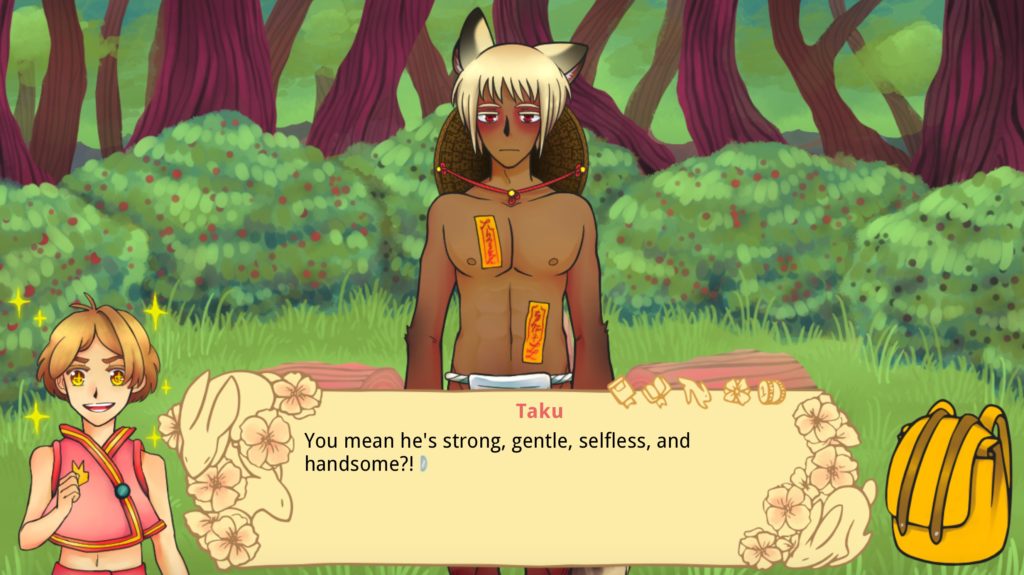 Unlike the other picks on this list, Ciikos Bridge is more of an adventure novel and does not contain any obvious romance plots. Interest between the male characters is implied though, and Ciikos has small moments of flirtation and friendship. You play as Taku, a young boy who gets accidentally transported to a mythical land. He has to figure out how to barter with the locals there in order to gain passage back to the other side. Cute and heartfelt.  –C.M. 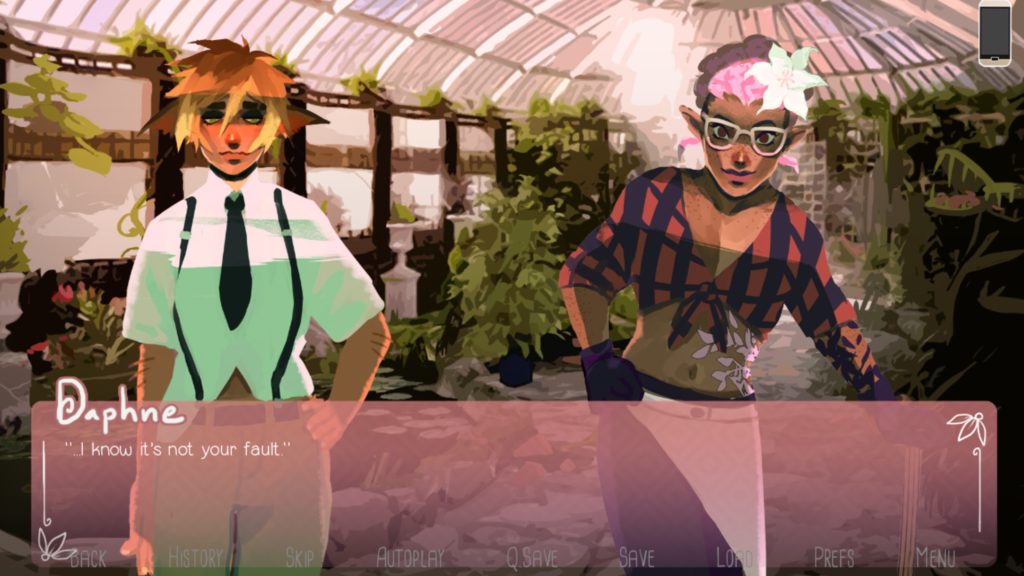 Lone Wolf is a short novel about Laika, a werewolf who’s bored at her tech-support job. Lone Wolf presents two possible romance options, a longtime bestie who happens to be a gardening nymph, or a flirty new succubus in the office. The dates are all too brief, but the art by kunaike is beautiful and the game is worth a look. –C.M. 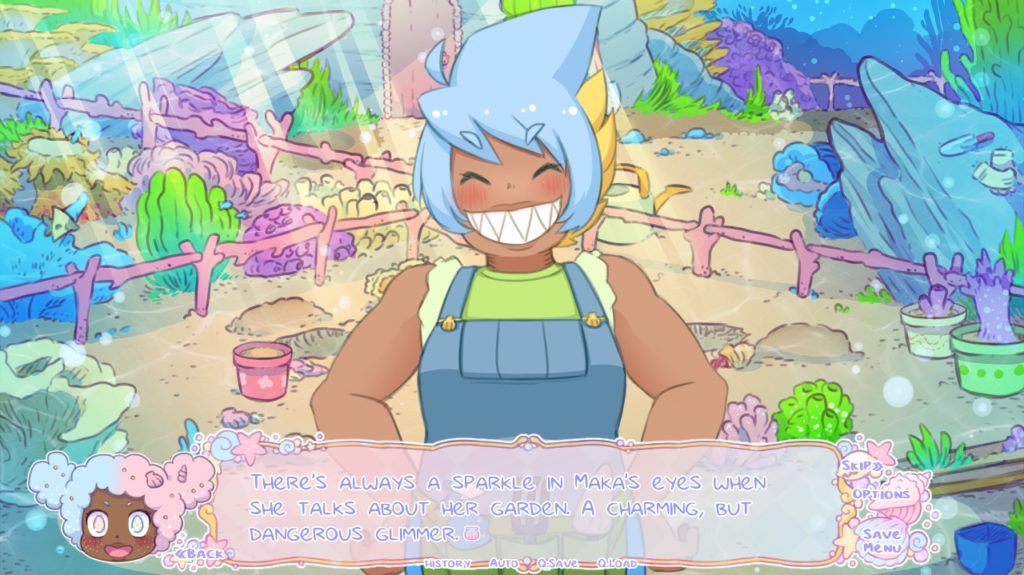 Mermaid Splash! is not a deep story, but it is an enjoyably cheerful one. You play as Cici, a mermaid with bubble gum hair who’s determined to learn a new skill to show off at an annual talent show. The game is full of pastel colors, perky protagonists, and a flirty, buff lady shark. The game boasts an impressive 23 endings, and is safe for all ages. —C.M. 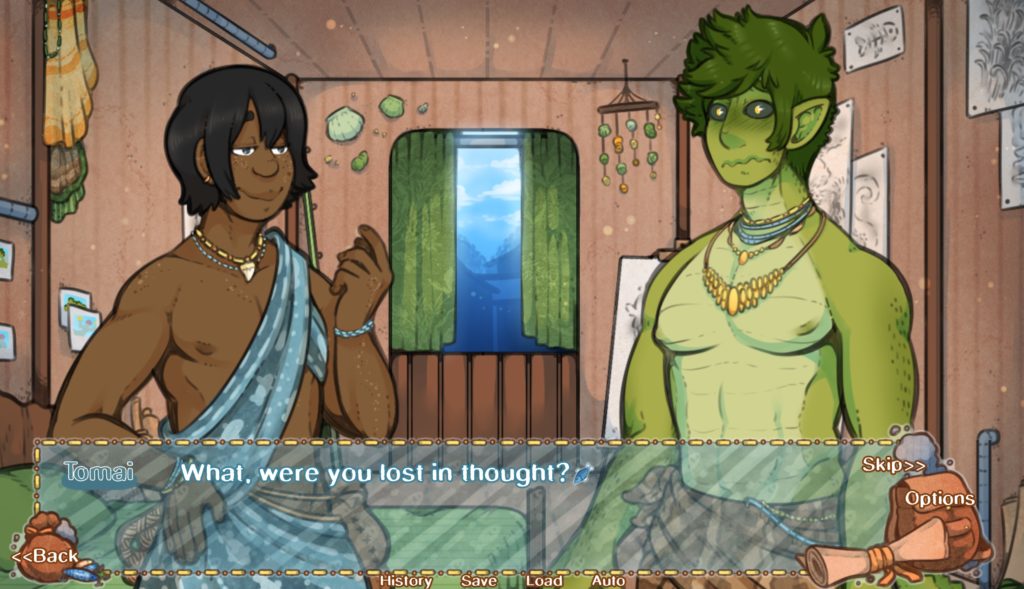 Tomai is a sweet little visual novel about Tomai, a 23-year-old deep sea dweller who has 15 days of freedom before he needs to buckle down and take over his father’s shop. It’s still in demo, but it appears you can romance two of  your male buds, a fashion-forward octopus or a shy, artsy alligator. The game also hints at Tomai learning to navigate his relationship with his father, and figuring out how to live up to his father’s expectations now that he’s expected to be an adult. It’s a light-hearted and easy read, and features a dark-skinned protagonist to boot!  –C.M. 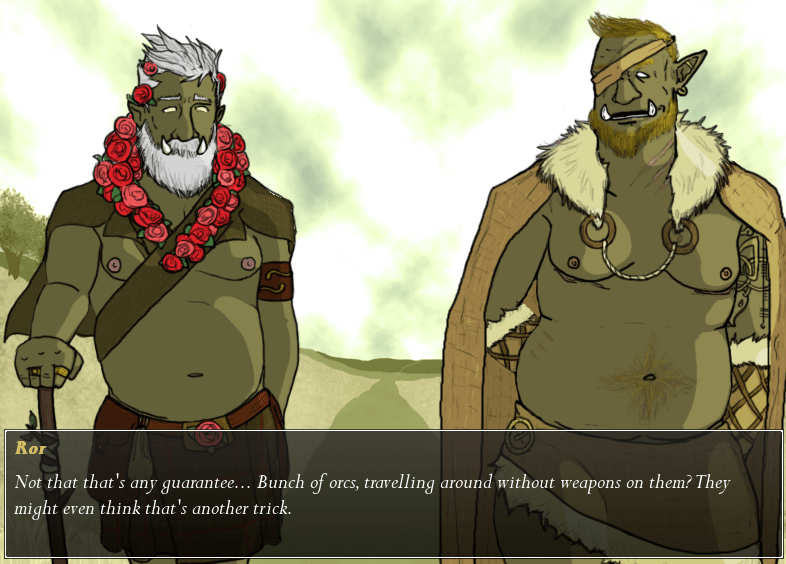 Tusks is the definitive gay orc dating sim, but, even though it’s still in demo stage, it’s clear that it’s so much more. Writer and creator Mitch Alexander brings an authenticity to the fantasy setting that’s incredibly important; with a game with as initially bizarre as dating orcs, you need the earnestness only a queer creator can bring to the table. With a range of body types and personalities, Tusks looks like the hunky and sweet dating sim we’ve truly been waiting for. –M.B. 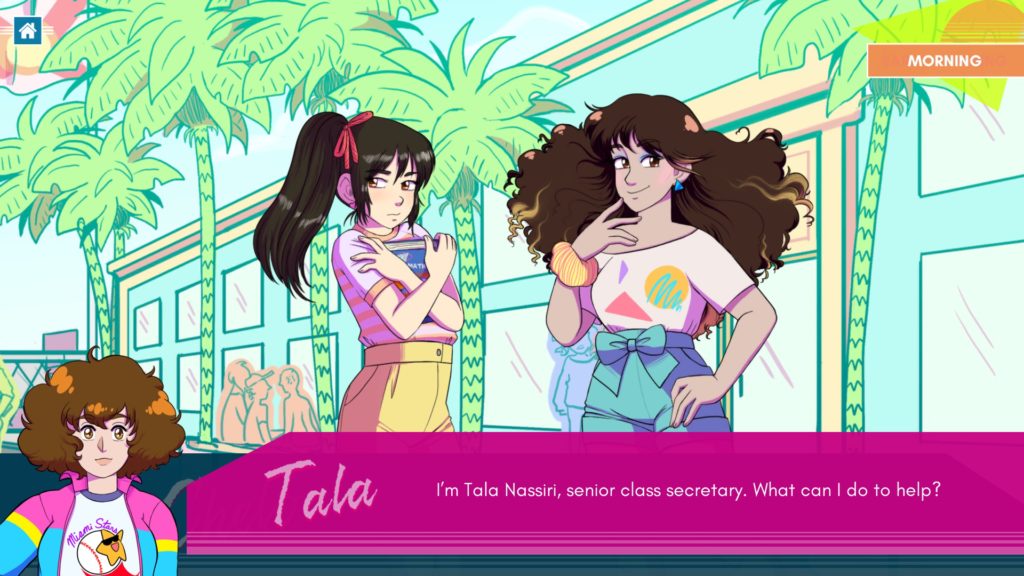 Ghosts of Miami feels like a bright, bubblegum pink homage to 1980s crime procedural shows. You play as private investigator Chelo Martínez, a queer Cuban-American woman who’s determined to find missing persons. The game is half mystery/adventure, half romance if you choose to let Chelo get distracted by the various leads around Miami. As a studio, Pillowfight prides itself on focusing on accessibility, which means reading options, controller options, and text-to-speech integration. –-C.M.

There are also Kickstarters you can check out and support, such as It Will Be Hard, a choose-your-own-adventure comic about two men who fall in love despite their differences, and Who We Are Now, a queer, post-apocalyptic visual novel. Any other projects by queer creators that you’d love to boost? Sound off in the comments!