What A Gaming Mom Can Gift Us

I love being a gaming mom and look forward to many, many years—nay, decades—of gaming. I aspire to be like Shirley Curry, the “gaming grandma,” and my best gaming buddy and I have grand future plans to be sitting in our rocking chairs, lost in the virtual worlds of the latest BioWare game.

But I’m already a well established gamer. There are gaming mom groups all over the internet. And as we age and gaming evolves, our continued gaming into the future won’t be a novel thing. No, I am nothing special. But gaming moms who don’t actually know a damn thing about gaming? They are a treasure.

My mom was most certainly not a gamer, and she made it quite clear that she thought my comic books were stupid. I’d get the occasional side-eye when I spent too much time grinding materia in Final Fantasy VII or practicing finishing moves in Mortal Kombat.

Then one day, nothing was going right for her. I don’t remember the cause of her anger and frustration; I only remember the cure. I sat her down beside me in front of my Sega Genesis and handed over the controller. “Just keep pushing this button,” I instructed gently. Grudgingly, she did. Watching the screen, she saw Chun Li come to life and beat the crap out of my Cammy.

Normally, I don’t give mercy rounds, but my mom had sacrificed so much for me over the years. Why wouldn’t I let her enjoy this small victory? And really, it was a just as much a win for me because, even though she never played a video game again, decades later, I still treasure that moment.

It pleases me to see that I’m not alone in treasuring such memories. Most recently, Rami Ismail gathered up his #momvsffxv tweets to share his mom’s adventures with Prince Noctis.

This #momvsffxv thread of my mom playing her first game, FFXV, lasted from January 23th to July 9th. https://t.co/NI6ujvV6Z8

Several years ago, I was a regular reader of Mom Effect, where one intrepid gamer worked his way through the entire Mass Effect trilogy, letting his mom (with occasional armchair input from dad) make all the decisions. Turns out, his mom had no tolerance for, well, people, and killed a large number of them, but more importantly, she quickly came to understand the most significant aspect of BioWare game play: flirting with all the things (or not): 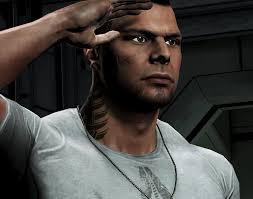 The Normandy shoots into space. The crew that happened to be on board during the extraction have no choice but to come with us. Vega in particular is furious about abandoning earth.
Me: This is one of our new teammates in this game.
Mom: Bleh.
Me: What’s that for?
Mom: He’s a big doofus.
Mom isn’t immediately throwing herself at the male human squadmate this time.
I don’t understand.

Gamers, are you tired of your mom nagging you about your gaming habits? The answer is right there in front of you. Don’t pout and lash out about your out-of-touch parent’s utter lack of understanding of your passion. Instead, embrace their ignorance and hand over that controller. Create the gaming mom. I promise you, it will be the best Mother’s or Father’s Day gift you’ve ever given them—and a gift to yourself, too.

Until they refuse to give the controller back, of course. So consider saving up for a second gaming system to truly level up your family bonding experience.