Diary of a Pathfinder Sex Idiot: Sex Trap in the Sexcape Pod

THINGS ARE HAPPENING, FOLKS. Evil genocidal aliens have been killed, alliances have been made, and my crew are finally starting to trust me more. That means, naturally, some of my little sexy chickens are coming home to roost. It has resulted in some … interesting dilemmas, as it would for anyone with 600 years of pent up thirst. 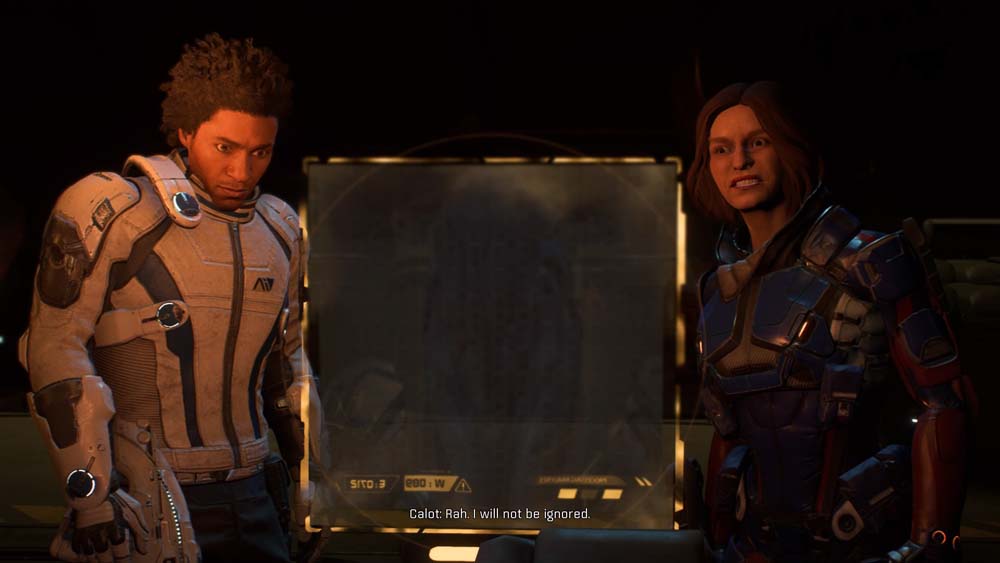 The many emotions of Liam’s loyalty mission.

The crew is finally starting to trust me and my Ryder after our first major strike against the kett, and that means … LOYALTY MISSIONS! Loyalty missions are not mandatory like they were in Mass Effect 2, but the payoff for doing them is pretty good and opens up a lot more character moments with them, as well as a locked tier of high level abilities. Spending time with my pals is always my favourite part, so I’m really glad that Andromeda has actually seemed to prioritize that. Liam, Jaal, and Vetra’s loyalty missions are definitely my favourites out of the bunch, especially Liam’s, which is absolutely ridiculous. We had to have a bit of a serious talk afterwards, but I couldn’t stay too mad for long.

They’ve also started sending me more email too. Jaal has started sending me his “communications”, and they are delightful. Liam doesn’t send emails, he sends attachment-heavy manifestos of things he finds culturally relevant, which would be annoying in real life, but I will allow it since he seems to be pretty into swanning around without a shirt. Jaal wins though because he just walked around the ship with no clothing at all and he didn’t even like Ryder at that point. Careful with his heart, less careful with his butt, that one is. I’m not complaining.

The first time I hung out on Aya and found out where everyone chose as their hangout spots, I eventually ran into a despondent Peebee in Aya’s history museum, where she was upset about how everything in Andromeda is “already discovered”. I can’t say I felt too sorry for her about that. Girl, you could live to be a thousand years old, and are already a couple of hundred years older than I am, and even I know there’s nothing in this world that’s left to be discovered. And frankly that line of thinking is colonialist and gross. But I digress. Peebs decided to deal with this disappointment by getting drunk, and when I came back, she started going on about how she was only sticking around because she thinks Ryder is hot. I was so proud. Of Ryder, to be clear. My Space Daughter is finally getting somewhere. 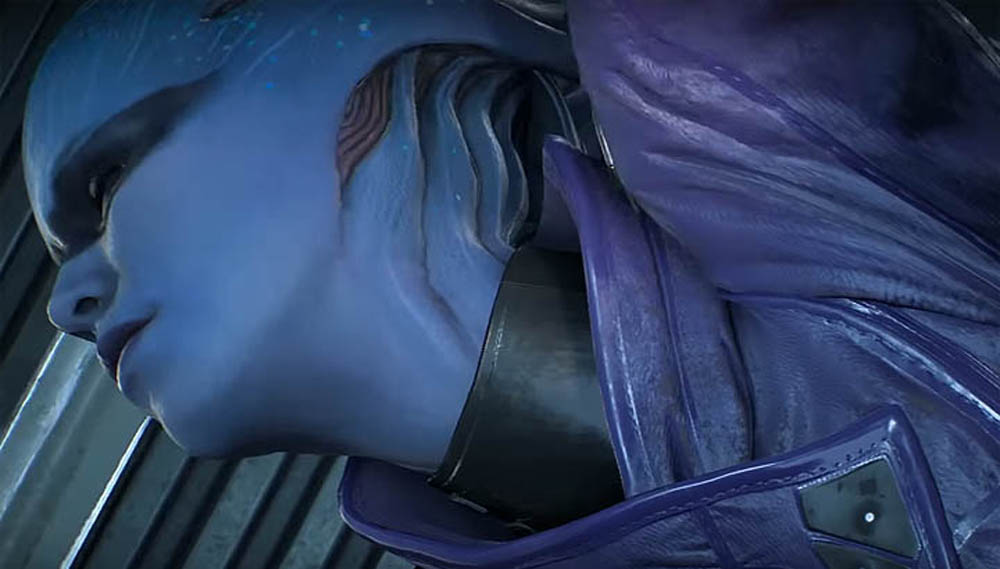 This happened and I screamed. (With delight.)

The next time I went back to the Tempest the bridge crew informed me that Peebee wanted to talk. “Cool!” I thought, wandering unsuspectingly into the escape pod she had claimed as her home. My mind is kind of hazy on what went down next. I do know we were having a fairly normal conversation when she cut the gravity in the pod. And that’s when the moaning started happening. “Oh no, she has sex trapped me!!!” were pretty much my thoughts after that, and sure enough, Peebs was propositioning Ryder for guilt-free, gravity-free sexytimes. A lot of things were going through my head, not just things like, “Hm, I don’t know if I like Peebee enough in that way to do this” but also “Wait, wouldn’t sex in zero gravity actually not work? Or be dangerous? I should Google ‘masturbating in space—’ no, wait, I definitely shouldn’t Google that.” I did not Google that, but no gravity sex probably WOULD be terrible because so many of our bodily functions are dependent on gravity, so things are much more difficult in a no-gravity environment, unfortunately. (Yes I did think about it a lot.)

Ultimately, I decided not to sleep with Peebee, but I definitely sat there for about ten minutes, controller in hand, mulling it over. I had my eyes on a couple of other people, and I was nervous I might accidentally get locked into a relationship, which is something a lot of people playing this game have had happen.

HOWEVER, I do deeply appreciate Peebee’s game here. That was a lady with a plan and she executed that plan. It failed, but she was cool about it.

ANYWAY, evading one sex trap didn’t mean I wasn’t out there exploring other options, or that other ones didn’t find me. Andromeda has a lot of non-crew or squad romance options scattered throughout the Heleus cluster (these are referred to as ‘light romances’), and I dabbled with them ALL. I wish I could say I was really into any of them, but unfortunately I cannot. I definitely flirted with the asari documentary filmmaker a couple of times, but honestly didn’t find it very fun, and she just didn’t make enough of an impression on me to keep doing it. I flirted with the governor of Aya, but she told me she was too busy to pursue anything with me, which I think was the angaran version of “I’m not into women.” She was naturally very nice about it, which is the angaran way. There were definitely a couple of other people I got to flirt with who made so little of an impression that I can’t even remember who they are. There was only one person who I actually wanted to flirt with, and that was the fantastically nerdy and excitable angaran historian, but it went right over her head even though I scoured the cluster for artifacts for her. (I still love her.) Of course I couldn’t flirt with all the side characters I WANTED to flirt with, like Keema and Kandros and Evfra, but at least for the latter fanfic has got my back. 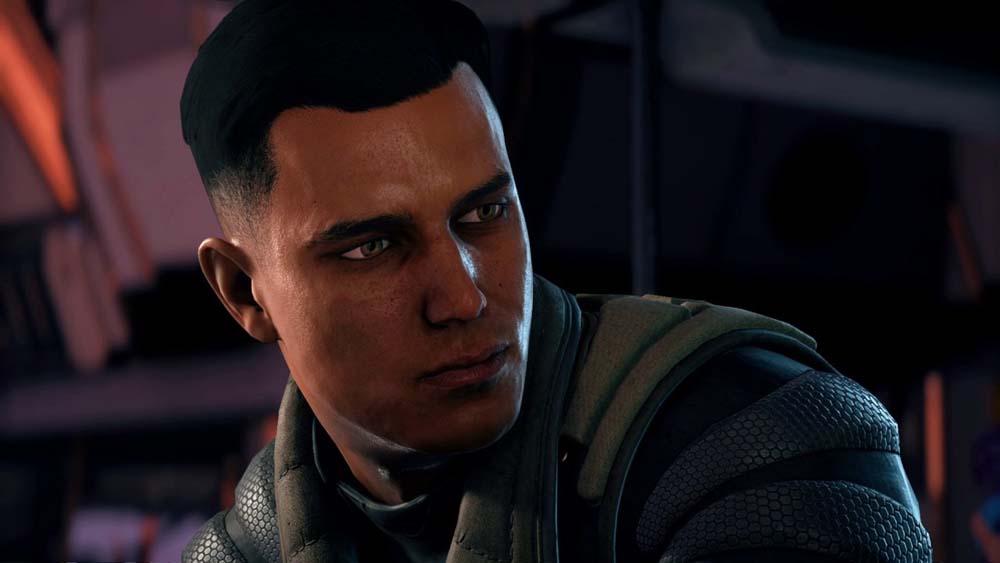 I almost get it with this screenshot of him but I still don’t really get it.

Then there is perennial fan favourite Reyes. Everyone I know romanced his thirsty ass, but I was completely not into it! Every flirt involved you making the move before he does, and I don’t know, he wanted it too much. (This probably says a lot of things about me.) We just met, stop suggesting we get drinks so suggestively! I now know how most of my crew felt when I did it to them, so I suppose I deserve this. And honestly, after finishing the Kadara main questline, I don’t regret not doing it. The less we say about my dislike for that plot’s entire endealment, the better. I have also heard that the romance arc pretty much ends there as well, which sounds disappointing. At least with people on the ship there are more moments with them. Plus banter!

The only good thing that came out of Kadara was seeing Vetra work her smooth-talking skills in the port, and Jaal being very cranky and leaning hotly on things. Maybe I have a problem, but that guy pouting and leaning on stuff really worked for me, and that’s what he does all over that planet. So thank you for that, at least. This probably says other stuff about me that I don’t want to think about too much.

In the next installment, you finally get to find out who I slid into home base with! There unfortunately can be only one. If you’ve been paying attention you’ve probably already figured it out. But will it turn out to be the greatest love story the Heleus cluster has ever known, or will I mess it up?