Chronolink DX Is Your Next Favorite Phone Game

Let’s talk about your new favorite phone game. It’s called Chronolink DX, or as I like to call it, The Monster Mash. There is no monster mashing, but it feels appropriate to me. 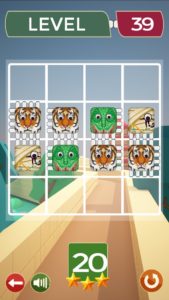 The Dinosaurs don’t move but rotate when tapped. The Mummies don’t rotate but can be moved. The Tigers both move and rotate. It gets complicated quickly!

Sidequest was provided with a copy of Chronolink DX for iOS in exchange for a fair and honest review.

Chronolink DX is a fun, challenging, and easy-to-learn puzzle game with a time travel conceit. You begin with the Dinosaur in the Prehistoric Era who tells you, “My friends and I can learn about time travel if we connect with each other.” (Given that you are literally connecting the characters, this is a cute pun!) You travel through to the Mummy in Egypt, the Tiger in the Chinese Dynasties, the Valkyrie in the Viking Era, and beyond. Each of these characters becomes a block that allows you to do something different.

The purpose of the game is to connect the blocks within a certain number of moves. Each block has up to four connection “links” on each side, such that you can only connect blocks with the same number of links on that side. So, for example, if you have a block with one link on the left side, you need to connect it to a block with one link on the right side. Sounds straightforward, but each thing you do, whether rotating or moving a block, takes a move. The fewer the moves, the more stars you gain (up to three). As the levels progress, there are multiple blocks of different types. 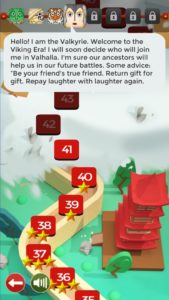 The Valkyrie gives some solid advice.

When you unlock a new era by clearing a certain number of levels, the new era’s character gives you a little spiel on time travel and some wisdom as well. The Tiger says to “take this opportunity to make new friends and continue to uncover the future!” What a cute addition to such a simple game! I look forward to clearing each era so I can find the next character and learn what they have to say.

At first, I was worried that I was going to beat the game quickly. The early levels blast by; I played the first 40 before an hour and a half had passed. Fortunately, it began picking up in difficulty after level 20. Now, two days into the game, I’m in the 60s, where it’s definitely getting harder. (The Valkyries are tough to use!) So far, though, I haven’t found it frustrating. The challenge has been fun!

There is one thing that has been frustrating for me, and that is pieces turning when I don’t want them to. The Tiger can be moved and turned, for example. Sometimes, when I move it, it also turns. Boo. Admittedly, this might not be the app at all, but my phone, which is getting old.

The game, in its current form, comes with 200 levels and eight characters. There is no shop and no advertisements, making the interface clean and not distracting. Even the music is good! I usually turn off the music in my phone games, but it’s actually quite soothing and enjoyable in the game.

Give Me Five Games is releasing Chronolink DX on July 9, 2017 for $0.99, which is affordable and totally worth it for this game. If you’re in the market for a puzzle game with no learning curve, cute graphics, and a fun backstory, this is the game for you!