Monument Valley 2 is a Delightful, But Too Safe Sequel

To open Monument Valley 2 is to enter a pastel world of strange, wonderful landscapes, where everything is M. C. Escher and physics aren’t real. There’s nothing quite like the satisfying mental click when you finally crack its nonsense puzzles by sliding a set of stairs into an unlikely place or rotating a wheel just so to let your little avatar navigate to a new area. It’s immensely satisfying and frightfully clever, as some solutions had me gasping out loud just to see that they worked. 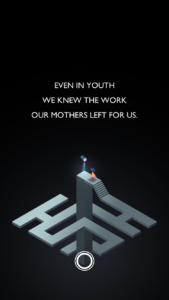 Unlike its predecessor, Monument Valley 2 features two protagonists. You control Ro, as well as her daughter, as they navigate what seems to be a rite of passage for whatever society they inhabit. The textual narrative is sparse—though a sort of mentor-like figure delivers lessons at the end of every level, they’re abstractions, not plot hints—but that leaves plenty of space for the player to fill in objectives and motivations. Perhaps this mother and daughter team are archivists or archaeologists preserving the remnants of this puzzle kingdom, or perhaps they’re explorers. Whatever the case, there’s not much narrative to be found in the game aside from the patience of a mother waiting for her daughter to grow and the struggle of the daughter learning to succeed on her own. It’s touching in an abstract way, but not something that hasn’t been done before.

But few people play Monument Valley for its story, and for good reason. It’s the puzzles that surprise and delight, and the sequel includes a few additions to the first game’s roster, such as sliding window shades that make trees grow. Each one is exciting, shaking up the gameplay and encouraging you to really stretch your brain in a different direction. 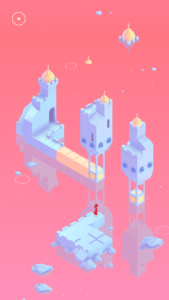 Unfortunately, the game is painfully short. Every time a new mechanic is introduced, it’s left behind in just a few short levels. Monument Valley 2 is a mobile game and therefore naturally on the short side, but there’s such innovation at work in its puzzle design that it’s a shame not to see it fully explored. It’s never particularly challenging because it’s easy to stumble into solutions by mistake—though the solutions are satisfying, you don’t spend enough time with each new feature to really see all that it can do. Rather than combining sliding, turning, and other mechanics, the design is mostly step by step. Turn, advance, slide, advance. Mechanically, this feels much the same; one mechanic leads directly to another, but there’s never any fusion or challenge to it. Despite how delightful it is to solve each puzzle, there’s not much more complexity than the first introduction of each mechanic.

Delight comes not from the gameplay or story, but from how the game looks and feels. Its art design is beautiful, with each level twisting and changing as you progress to reveal new secrets and surprises. These levels are visually striking—any one of them would make a beautiful poster, and seeing the ways that they reshape themselves through your manipulation is well worth the $4.99 price of admission. The feedback is excellent, with light sounds to clue you in to the changes you’re making to the environment. It’s satisfying to interact with the game, even if the puzzles themselves are frequently too easy and lack any lasting impact. 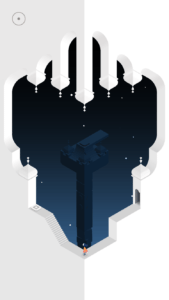 There’s so much about Monument Valley 2 that’s wonderful and inspiring. Its music, artistic style, and unique gameplay all set a high standard, but its gorgeous appearance is only surface level. The sequel does little to improve on the first game, relying mostly on tried and true formulas over experimentation and growth. For a game that’s so inspiring in other ways, it feels doubly disappointing that it plays it so safe.

Even so, Monument Valley 2 stands apart from most mobile games, and even many games as a whole. Its candy-colored landscapes and physics-defying puzzles are a much-needed reprieve from same-y game design and monochromatic landscapes, even if its ambition fails to match our aspirations for it. It could be better, but what it is is a game that values aesthetics, play, and delight—for a mere five dollars, that’s a vision I’m willing to support.