Welcome to the first installment of Diaries of a Pathfinder Sex Idiot! In case this is not obvious, this is my personal account of my adventures in Mass Effect: Andromeda romance storylines, quite frankly my favourite part of any Mass Effect game. My Pathfinder, Fiona, has been in cryo for 600 years, and she didn’t come to Andromeda to not fall in love, dammit. But, luckily for us, this seems to be the case for pretty much everyone else we encounter as well, human or alien (especially the aliens). Pull up a chair by the fire, and crank up Spoon’s “Hot Thoughts,” which is basically my theme song for this series. 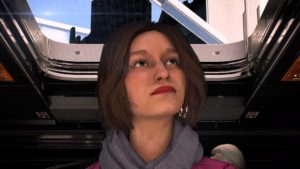 It’s a brave new world and Fiona is ready for kissing. (Thank you for photobombing this screenshot, Cora.)

Before Mass Effect, banging aliens had always felt like a male power fantasy to me. Every science fiction novel I had ever read with the trope featured the square-jawed male hero getting it on with an alien cat lady (it was always a cat lady) or maybe a hot blue alien woman. The tropey-ness of science fiction romances has gotten slightly better in recent years. Even now a search for “science fiction romance” on Amazon brings up covers with human male leads or aliens who are pretty much completely humanoid. Mass Effect of course has its own hot, blue alien women, but playing as a female Shepard completely subverted the trope. And of course Mass Effect gave us the One True Alien Boyfriend, Garrus Vakarian.

But it’s also a great lesson in empathy. “How weird can someone look before I won’t fall in love with them?” (I haven’t discovered the limit to this yet.) As someone who doesn’t exactly conform to typical beauty standards, it’s kind of nice to play a romance where the point isn’t the way a person looks. That being said, even Mass Effect could stand to go weirder with their aliens. Give me an elcor romance that is legitimately the best one in the game! Instead of shooting a sentient plant, let me seduce it! It’s space, there are no rules!

Fiona Ryder’s flirt adventures of course don’t begin until after the introductory mission, but as soon as I got the Tempest, I went out and flirted with everyone.

My impression of the crew so far:

Cora: OK, if you REALLY never even kissed an asari when you lived on Thessia, then I would not be surprised if they asked you to leave for for turning down one too many asari.

Liam: We are definitely bros, but I have exactly zero pantsfeelings for him. Just none at all.

Vetra: SO TALL AND GOOD AT SMOOTHTALKING.

Peebee: Peebee is flighty in a way that I occasionally find irritating, but she makes up for it by being very charming.

Drack: I whispered “I love you, space grandpa” after we finished talking, so that about sums up how I feel about him.

Suvi: Completely not my type. Nope, not at all. Sometimes I forget she’s there.

Gil: I’m not sure if I don’t like him just because he didn’t appreciate my pick-up line or if I just don’t like him. He’s so mean! And I wanna wipe that smug poker look off his face.

Kallo: Utterly adorable. I’m sad I can’t even flirt with him a little bit. I think his head would probably explode if I did though.

Lexi: Natalie Dormer’s character being completely unromanceable is another one of the game’s injustices against the queers. “You’re not my type: a patient” indeed. I WILL CHANGE YOUR MIND SOMEHOW.

Jaal: Please push me up against a wall, sir. Maybe whisper some things in my ear while you’re at it.

However, all of the aliens I flirted with were extremely game. Peebee, of course, is introduced by tackling Ryder and straddling her for a good two minutes, so no surprise there. You have the option to push her off, but I’m pretty sure literally no one has ever done this, and not just because we don’t know how interrupts work in this game at this point. But even tall spiky queen of my heart Vetra threw the ball back. See ya, boring humans, I’ll be busy with these two. Drack and Kallo are, sadly, unflirtable. Which is a shame because I think Drack would be really great at it and because I think Kallo would turn whatever shade it is salarians turn when they blush.

One thing I am loving about the flirting in Andromeda is how much it actually resembles my own version of flirting. Ryder is an awkward, joke filled nerd and so am I, and it’s so refreshing to play someone else like that. Commander Shepard is SMOOOOOOTH, especially compared to Ryder. Never forget the immortal line she uses to get Garrus in the sack. I could NEVER be that smooth in real life. Ryder on the other hand is openly thirsty and unprofessional probably ninety percent of the time, and I love it. My Ryder is in particular, and every time she tries to act the way she thinks she’s supposed to in a professional capacity, it backfires. Every. Time.

But even the non-flirting dialogue in this game is horny as hell. During my first real conversation with Peebee, she says something like, “Get a few drinks in me, and you’ll be surprised about what falls out of my mouth” and I literally fell out of my chair. Jaal says he’s good with his hands the first time I had a conversation with him, and I think I broke my eyebrows waggling them so hard. These were both totally normal conversations, by the way. The aliens are definitely the real champion flirters here, and I’m quickly less upset that Cora isn’t canonically queer (even though she TOTALLY IS).

One of the problems I had with flirting in Inquisition is that it is so inconsistent and sometimes didn’t really feel like flirting at all, but that’s not the case with Ryder. In general, Ryder strikes a really good balance between creating a consistent character while giving the player freedom to determine what they’re like.

So in summation: flirting yes, very good, I definitely want to flirt with most of these people, which is half the battle. In the next installment, all my little seeds of flirtation have started to sprout, and I’ll be discussing propositions and light romances.

Also, probably butts. There are a lot of butts in this game.