The Sims 4: Parenthood, or, how Millennials are Killing Family, Too

The Sims 4 has been out for almost three years now, and I’ve been playing it almost since launch. I’ve bought DLC after DLC but, until now, none addressed my one major qualm about the base game: its lack of family-oriented gameplay features. But with the addition of the Toddler life-stage earlier this year, and the new Parenthood game pack last month, TS4 now invites players to have as much family as they think they can handle.

At launch, The Sims 4 lacked the Toddler life-stage, which had been part of the game since The Sims 2. That alone turned lots of people off the game. You might ask yourself, why make such a big deal out of toddlers? Nobody likes those. But I promise you, if you’re invested in the rearing of virtual spawn, to see them age from a crib-bound baby into a fully-autonomous approximately nine-year-old is jarring as fuck. 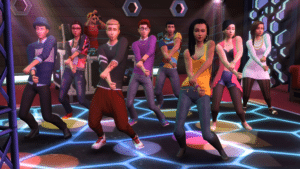 No to Toddlers, yes to dance parties.

Caring for toddlers had been a core part of gameplay during the previous two games, so a sequel that lacked that feature just seemed off. One of my favorite ways to play The Sims, even since the original, was to do freestyle Legacy Challenges, where I would bring a family from rags to riches across many generations, starting with one very poor Sim. These challenges are great when you play sandboxey games like this one, because they give you a clear goal and help you churn out a story about these characters you’re spending so much time with. But with the game as it was, without family-oriented gameplay features, a Legacy Challenge wasn’t doable for me—and, I guess, for many others as well.

Regardless, I stuck with it. I simply turned ageing off, forgot about family-oriented gameplay, and enjoyed the other aspects of Sim life that EA evidently wanted us to focus on. It was fun enough for me. But in January this year, a free game patch rolled out which added the Toddler life-stage along with every gameplay feature you would expect to go with it.

That was exciting! After more than two years, I was ready to start my first Legacy Challenge in The Sims 4. I started a new game, made a cute new Sim, and began planning how she would survive and, hopefully, thrive. I even recruited Mr. Akira Kibo, IMHO the cutest boy-townie that came with the City Living EP, to be her boyfriend and legacy-cofounder. I started documenting their story in a virtual journal, photos and all. (Yes, I’m a nerd, but you knew that already.) 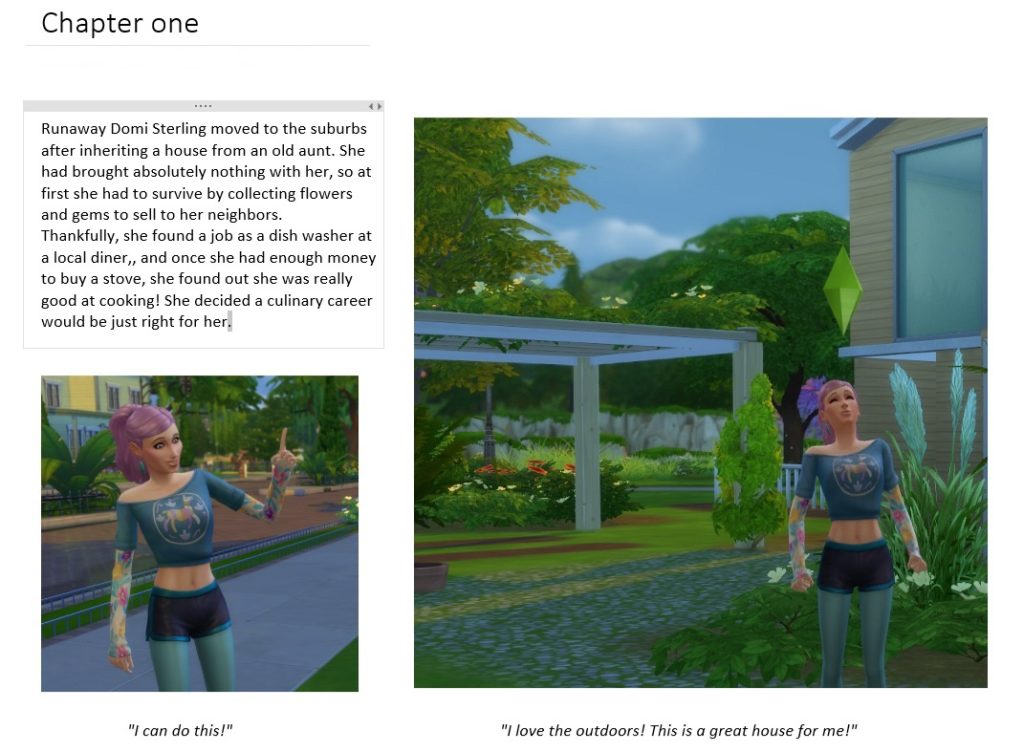 This really wasn’t meant to be made public. Oh, well.

And then, just in time, the Parenthood game pack rolled out. And it looked. So. Awesome. Parenthood builds upon the gameplay features that were added with the Toddlers patch, and allows for a much much more family-oriented play style. 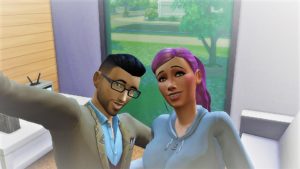 For example, it lets your parent Sims shape the values and behavior of their children through interactions that are unlocked as they gain points in their new “parenting” skill, and some formative moments that are generated randomly while kids are at school. You can influence the kids yourself, queuing up actions like “set the table” which looks pretty cute in-game, and will raise their “manners” value. There’s more in-depth information about the pack in The Sims 4 blog.

I bought this pack without thinking twice. My Legacy founder and her boyfriend moved in together and started having kids while their financial situation was still, eh, not very good.

I think that was my first mistake, because things started to go south from there. Once their firstborn aged into Toddler, I had to start turning down every single invitation my Sims received. There was no more time for them to go out to Karaoke bars, see the festivals in the city, or even take care of their precious plants (one of their main sources of income, by the way). My Legacy founder’s hair went back to her natural color. (Who has the time and money to maintain pink hair? Certainly not her!) They both took as many family leave days as were available to them, and still I could barely stay on top of their Toddler’s needs. They stagnated in their careers. They were getting more and more jealous of each other, and started getting whims to WooHoo with someone. Not their partners, just a generic and mildly disturbing someone. 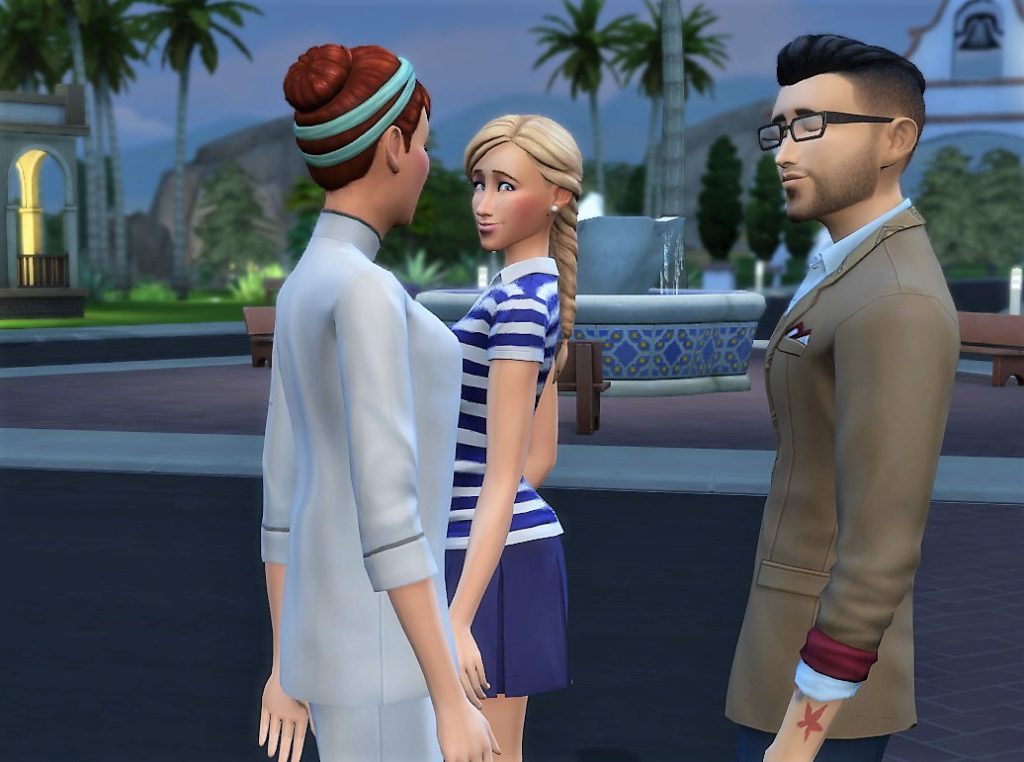 I kind of ship it, to be honest.

So, of course, I had to make it worse. I made them get pregnant again. I sold their cute starter house and bought an empty lot, in which I built an ugly, but practical, one-storey house with plenty of room for both the kids and no staircases, which were a problem I hadn’t foreseen in the original house’s design.

Thankfully, the oldest kid grew up to Child just in time before his younger sister became a Toddler, which means he could start taking care of some of his own needs without help or even help his sister a little. Still, taking care of both these kids takes up absolutely every second of my Sims’ time. The parents are continuously “tense” from lack of fun, or “uncomfortable” from lack of hygiene or food or sleep, but I’m making sure the kids have their needs met, their skill points raised, and that the parents use every single Parenting interaction available to shape those kids into responsible members of Sim society. 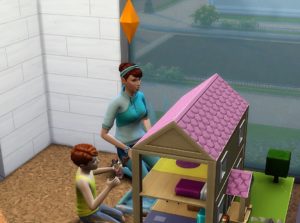 See the red plumbob? This Sim is not happy.

What the hell, though. Nobody told me Parenthood was that hard! I just wanted to create a cute family and help them follow their dreams, and now I’ll have to call myself lucky if I don’t raise one or more of these cute little assholes into psychopaths.

Don’t get me wrong. The game is fun, or I wouldn’t still be playing it. I guess I’m a little bit of an asshole myself, or I wouldn’t be enjoying the ordeal these poor adult sims are going through. But don’t think these Sim kids are the only ones learning valuable lessons here: if I ever have the slightest inclination to raise something more intelligent than my Maltese puppy, memories from this virtual nightmare alone will suffice to restore my good sense.