Get Your Game On: God of W

I had no idea that fidget spinners were a thing until Facebook and Google conspired to reveal their existence to me through insidious advertising. Facebook and Google believe I need a sparkly Batman spinner (obviously I do), but thank goodness they’ve not bothered recommend a Pewpewdie spinner. Meanwhile, in other gaming industry news…

Hey, remember when Final Fantasy 7 became the first video game advertised on mainstream television and beyond? Now it’s typical to not only see video game ads in the middle of your favourite show, but to have them even starring your favourite Hollywood actor. According to iSpot.tv, the real-time TV ad measurement company, PlayStation tops the 1.4 billion total gaming industry television ad impressions between April 16 and May 15. PlayStation ads were the top viewed, at 16 percent, followed by the mobile app company, King, at 15.9 percent.

The God of W Mystery is Solved!

Last week, a PS4 ad for E3 went up on a building, causing much speculation among gamers. Turns out, the ad is for God of War. Who knew! A 2018 release date announcement is expected for the new game. 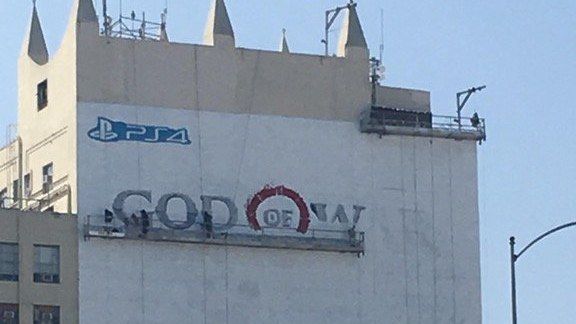 EA’s charity initiative, Play to Give, returns for a second year. This year, they will donate $1 million to five charities: HeForShe, CODE2040, Code.org, National Center for Women and Information Technology, and Special Effect. Though the company’s donation is not contingent on player participation, gamers are invited to participate in several of EA’s multiplayer games, including Star Wars: Battlefront and Madden NFL 16.

Not Your Booth Babe

These women are kicking ass in the games industry, but still have to deal with the shock and awe when people find out they are playing alongside a woman.

“I was mistaken for a booth babe or marketing girl at a games exhibition once. What got me was the reaction I got once I corrected the gentleman that I was a game developer. His reply was ‘oh, you don’t look like a game developer’.”  –Maru Nihoniho, Metia Interactive founder and recipient of a New Zealand Order of Merit for service to the gaming sector