Now that we’ve made it past the post-holiday slump, game releases are coming fast. Throughout March and April, the Women Write About Comics games section has been playing a wide swath of games in multiple genres, giving us a lot to talk about in this month’s compilation. Night in the Woods

Night in the Woods feels so good.

When I left my small podunk town at 19, I never went back. I stopped going to college for a while and immersed myself in World of Warcraft, but nothing would drag me back to that forsaken place. And still, like most twenty-somethings, I’ve been Mae. I’ve been bored and tired and angry and sad and afraid, and few games capture that feeling as well as Night in the Woods does.

Mae isn’t the chosen one, the savior of the world, the wisecracking hero out for treasure. She just is, in the way that so many of us just are. Though she gets swept up a small-town mystery, those moments are secondary to the conversations she shares with family and friends, no matter how mundane or antagonistic she may be. At times, some may find her unlikable–personally, I find her relatable even when she does the exact opposite of what I would do in a given situation.

I haven’t finished the game yet, but, if you’re a fan of narrative adventure games, that gorgeous Richard Scarry-esque artwork, or that unique need to slam the brakes on your life somewhere between 19 and 25, you’ll likely find something to enjoy in Possum Springs. 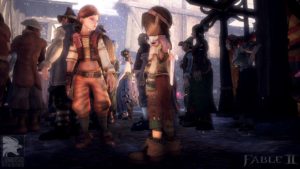 I was a super cute little girl with an adorable dog, and then my sister was murdered. Naturally, my response to this is to grow up, become a badass, and give her murderer a whomping.

In Fable 2, this whole plan takes somewhat longer than in-game me (nicknamed Sparrow) would have hoped, with two jumps in the timeline of ten years each. By the third act of the game, after the final time-jump, Sparrow has become a huge, burly woman with a neck and thighs like tree trunks, and she will SMASH YOU. I haven’t finished yet, but it’s a Fable game, and so I’ve got a pretty good idea how it’s going to end. Prediction: There will be blood.

Of all the Fable series, I’ve only actually managed to play Fable 3. I’m finally getting around to catching up on all the games I missed growing up, and that means digging up old Xbox 360 games and trying desperately to round out my gamerscore. If you’re into that sort of thing (like me, please send help), you’re going to find Fable 2 a hard one to complete. Several of the achievements involve co-op, which is hard to deal with on a nine-year-old game, and there are two DLCs with a combined 16 achievements to themselves. I’m having a lot of fun with the game, and I’d love to 100% it, but I still haven’t decided if I can justify shelling out full-price (about $25) for DLC for a game I can pick up for $3 at a garage sale.

If anyone needs me, I’ll be weeping into my achievement guides. 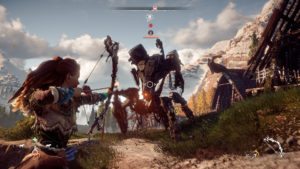 Horizon Zero Dawn is a lot of fun. If you love playing as an archer in games like Skyrim, Horizon will be your dream game. The combat mechanics are free of complex button combinations (it’s much simpler than The Witcher 2, for example) and let you use a variety of bows, slings, and harpoon-like weapons to take down your opponents.

While crafting can be a frustrating process in other games, Horizon makes it easy. Resources are abundant. Herbs for healing are all around you, and every machine or animal you kill yields parts you can use. Choosing skills to level up is clearer and simpler than BioWare or Elder Scrolls games, as the game shows a video preview of each skill.

Horizon‘s story focuses on Aloy, a young warrior seeking the truth about why she’s an outcast to her tribe and the identity of her mother. Playing as Aloy is a fast-paced and kinetic experience, as she roll-dodges, leaps up cliffs, like in Mirror’s Edge or Uncharted, and sprints without any stamina meter to limit her. If you’re looking for an adventure game that has many small sidequests, but offers a brisk main quest, a lush outdoor world, and exciting combat that’s easy to master, Horizon Zero Dawn is your pick.

When Nintendo announced that they would be making the move towards developing games for mobile, game journalists were at best skeptical, and at worst, absolutely hated the idea. But of course, when Miitomo first came out this time last year, we all played it anyway. And it was pretty fun (at least for a while), and the same goes for Pokémon GO this past summer. So far, the general consensus with Nintendo’s mobile forays is that there’s fun to be had, but the fun only lasts so long. The same can be said for Fire Emblem: Heroes.

Fire Emblem: Heroes is a great introduction to the series for newcomers, because it’s essentially a strategy RPG gacha game. Tthe idea is to collect as many Fire Emblem characters as you can, and there are so many of them, so this could theoretically take forever. They’ve done a good job with the difficulty levels, as well, and are trying pretty valiantly to keep things interesting so players stick around. But Heroes, unfortunately, highlights some of the more frustrating aspects of the series, endless grinding, and it’s made extra frustrating by also adding pay to play.

I’ve figured out a lot of tips and tricks to make the most out of the free orbs you can get from the game, but it’s incredibly difficult to make your characters more powerful after a certain point, simply because you have to have money to do it. And in terms of where it lands on the mobile game expensiveness scale, it’s incredibly high. It can be a bit alienating because of that. There isn’t any shipping in the game, which honestly, is a major motivator for a lot of players, so even though they’re trying hard by releasing just enough story at the right time to keep things fresh, my interest probably isn’t going to last much longer. It’s also probably the least horny Fire Emblem game out there too, which is a shame because as everyone knows, everybody in Fire Emblem is super hot.

I’ve been wanting to write about Masks for a while, but haven’t found the right slant for an article on it. Masks is a tabletop RPG system/game, and while things have been rather hectic this month for me, stopping me from a whole lot of gaming, I made time for Masks. The system has you play as young superheroes in a world all the players help create together, but that has had years of heroes existing inside of. Character creation has players take a role from a set of playbooks and build their hero around that.

What is really standout about Masks is its focus on roleplaying over mechanics. There are skills, mechanics, stats, but everything is very streamlined. All rolls are done with 2d6, making it simple to manage dice. Stats have a maximum of +3 and a minimum of -2, so everything is just simple numbers that no one has to press too hard on following. Even leveling is easy, if you fail a roll, you get experience, and level up after you gain +10.

The power of Masks is getting to tell stories together with people and defining the world. There is a lot of minor homebrewing and rule bending in my group, because there are only three of us, but the backbone of this game is so strong that it still feels like I’m playing Masks while making this amazing queer superhero story.  We share DM status between me and my best friend, and it actually hooked my partner who is super in love with this despite not being much a gamer themself.

Any system that I can stretch a bit to play as the newest Aphrodite and fight people with love powers is a pretty awesome system. This stuff’s all about the personal journey, but I’ve never laughed more or felt more connected to people playing a game then playing Masks. It’s a piece of liberation that, honestly, I wish I was recording the sessions of because I think we are doing some legitimately great story-telling. 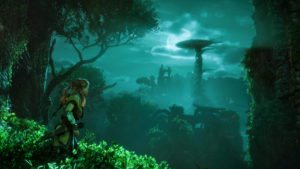 I started playing this game because I loved the animation. The landscapes are beautiful, and the machines were intriguing. When I found out that you could override the machines and pit them against one another, I had throw-backs to my childhood playing Pokémon. I just finished this game last night, and it was so well-written that I cried actual tears, because I wanted there to be more story to play.

As I started the game, I really appreciated the main character, Aloy. She is a girl who was cast out of a tribe that closely resembles Viking society, but with a strong influence of Wiccan earth-worship. I identified with these parts of this tribe, but found Aloy’s outcast status refreshing. Her views of the world around her are intelligent and practical, not based on religion. On top of all that, she never has a blatant romantic interest in any character and realistically tries to solve her problem of not having a mother/having no origin.

In this game, there are three people I would argue are LGBT (one gay, one lesbian, one trans), which is a breath of fresh air in the cis-het norm of gaming. In addition, folks of all religions and races are portrayed fairly equally. Though Aloy is female and arguably attractive, her tribe never makes mention of it. The only few mentions that are made are by foreigners who are quickly shunned because she has shit to do. It’s never a plot point, and everyone who admires her does so because she is smart and practical. The aesthetic and female main character are why I played the game, but the story and the mechanics are why I finished it. 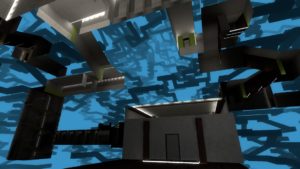 The premise of The Beginner’s Guide is straightforward. Over the course of an hour and a half, the player is given the opportunity to explore several games made by “Coda,” a developer that Davey Wreden met at a game jam in 2009. According to our narrator (Wreden himself), Coda’s reclusive nature made their friendship challenging to develop. As such, players of The Beginner’s Guide are forced to understand and connect with Coda in the same way that Wreden did: by playing Coda’s games, all of which were originally sent to Wreden via email.

Despite the simplistic graphics of Coda’s games, The Beginner’s Guide evokes emotions that are infuriatingly complex. While Wreden provides insights on what each game reveals about Coda’s mental state between the years of 2008 and 2011, his commentary also leads to questions about privacy, artistic ownership, the dangers of relying on external validation, and the perils of the obsessive nature of fandom. The Beginner’s Guide conveyed ideas that I’m still mulling over weeks later, and it left me excited for what’s cooking in the ovens at Everything Unlimited Ltd., not to mention pleasantly unsettled by the what themes they might tackle next.