VA-11 Hall-A: Cyberpunk Bartender Action is a visual novel of a different breed. Set in the year 207X in a place called Glitch City, this title follows a month in the life of Jill, who works at a simple out of the way bar named VA-11 Hall-A, or Valhalla for short. The world around Jill is harsh and cruel, and customers visit the bar for a moment of peace and a good stiff drink to avoid the realities of the outside world. While I am admittedly not a fan of the cyberpunk genre, I fell in love with this game anyway because of its story and gameplay. If you’re not a fan of the usual visual novels out there, this may be a very welcome change of pace. Although the story is largely kinetic, you can affect dialogue and gain different endings depending on your bartending skills. 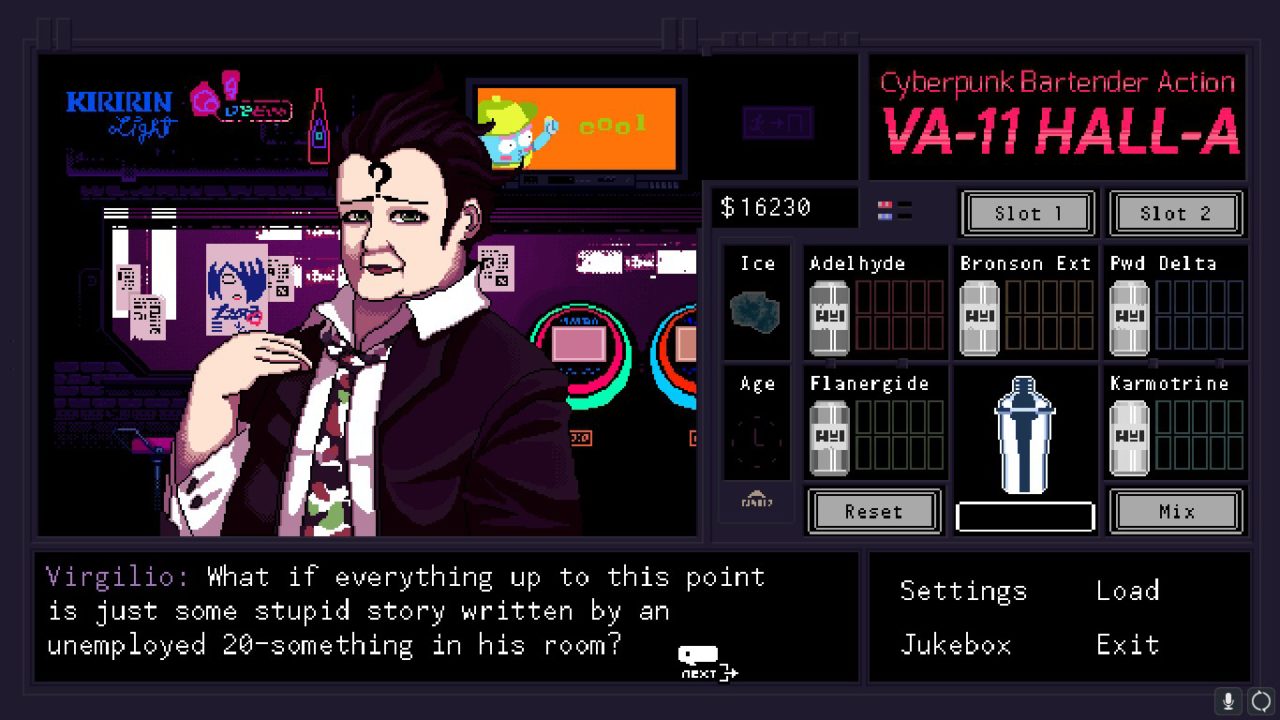 “Time to mix drinks and change lives” is what Jill will normally tell herself before starting her shifts. A majority of the game is spent in the bar as Jill stands behind the counter serving customers as they come in; Jill will talk to them about their lives and learn about them, and some even become friends. We learn about Jill as she relates to her regulars—effectively, the supporting cast she speaks with the most. While every single person who comes into the bar has an interesting story, only a handful pertain to Jill’s main story and of course affect the endings you get. I won’t give away any of the good stuff but expect to see humanoid robots with advanced AI, detectives, pop idols and even talking dogs. The beauty of this game is that even the most minor of characters has an interesting story to tell and many times Jill does indeed change lives, even if not with a drink, just by talking to someone else. 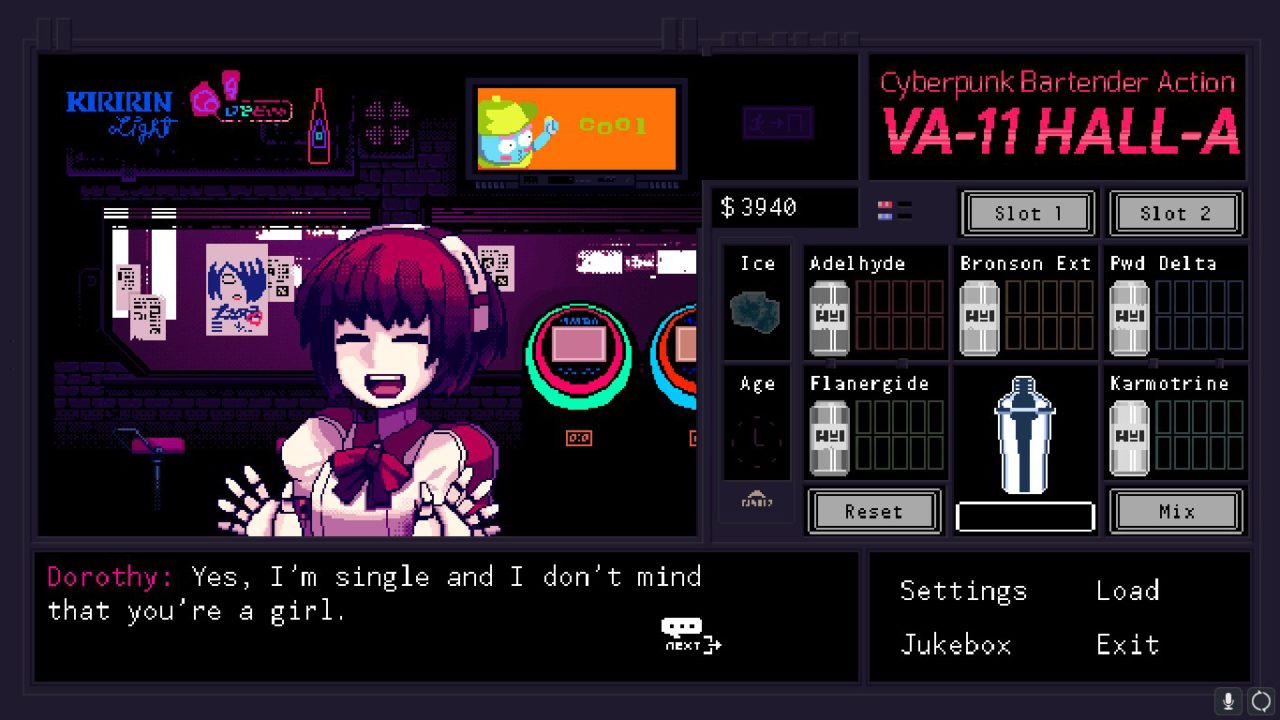 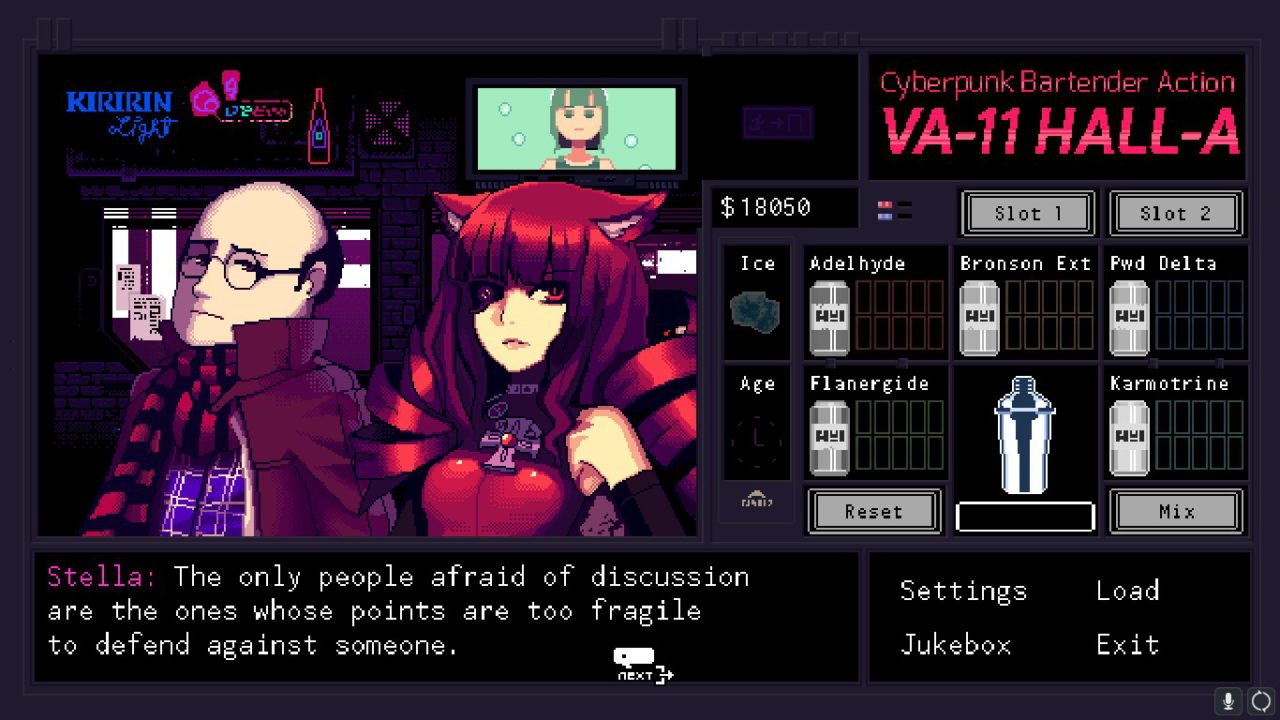 While the story itself flows pretty easily and where Jill ends up on a personally levels is always the same, your actions in the game will affect dialogue and different endings. The gameplay is really interesting as you have to balance work and also maintain Jill’s home life. She has rent that needs to be paid and also likes to decorate her room. Buying what the game suggests keeps Jill from getting distracted at work, though this amounts to Jill not focusing when a customer orders and not offering any tips or reminders on what they said.

And making drinks is the bulk of what you do in this game. A customer comes in, orders something by name, flavor, or even style of drink and Jill makes it. Sometimes they will ask for anything or Jill may think they need a different drink than what they asked for, and of course regulars tend to say “the usual.” When the drink menu comes up, you can look up recipes with a computer and mix the appropriate ingredients. Some drinks can even be super sized. Whether you get the drink right or not will affect customer dialogue. For instance, one character completely opens up to Jill when you give them the wrong drinks. And, of course, getting certain customers drunk will completely change things and often make for very amusing dialogue. Because of the nature of the gameplay, if you want to get everything from the game you have to play more than once. 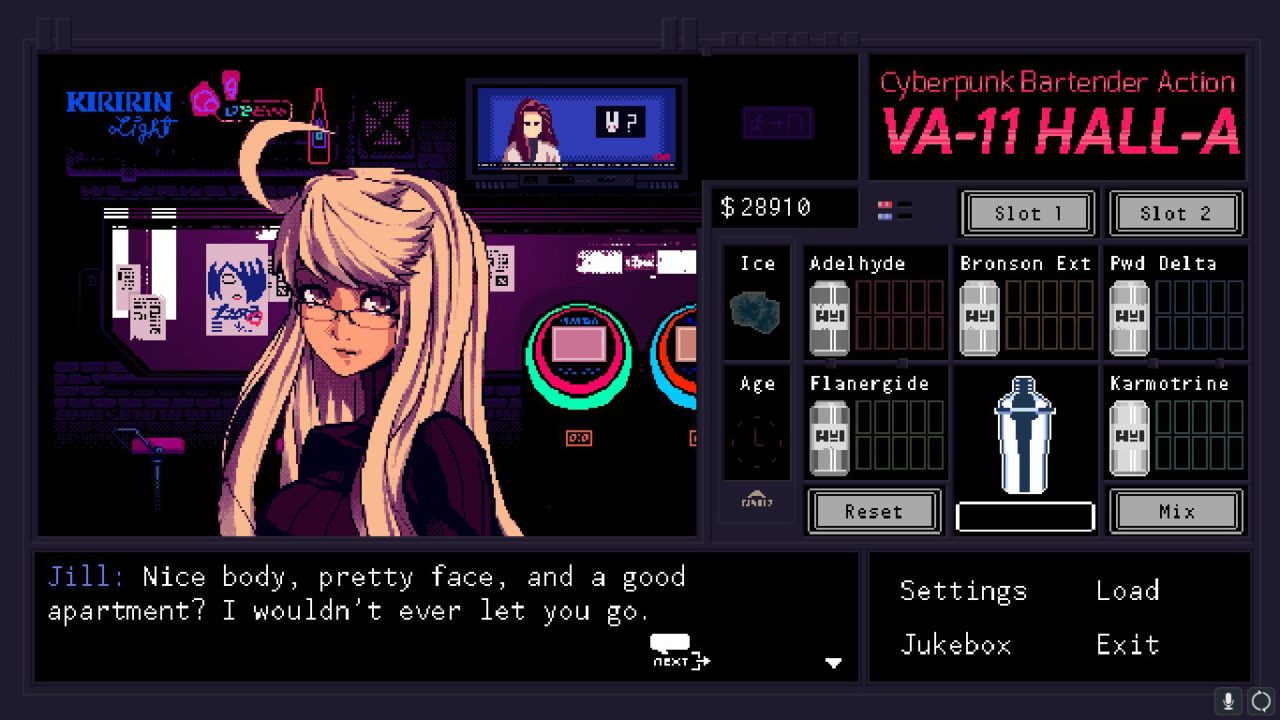 The retro pixel graphics of this game are great, hearkening back to old PC games of yesteryear. All of the characters look unique and are memorable, the scenery is a little one note but that’s to be expected, as most of the game is spent in the bar. The colors are muted and fit the tone of the game and its setting very well. I have nothing negative to say about the game’s visuals and it also has amazing music to match. A key feature in the game is setting up the jukebox before each shift so players can control which tunes play as they serve drinks. You can buy more from the store when Jill is at home, but a bulk of them only show up after you’ve beaten the game for a first time. The music ranges from slow, soft and mysterious to tunes that will make your heart beat faster and fill you with excitement. It’s a shame there isn’t a soundtrack available for this game at this current moment. 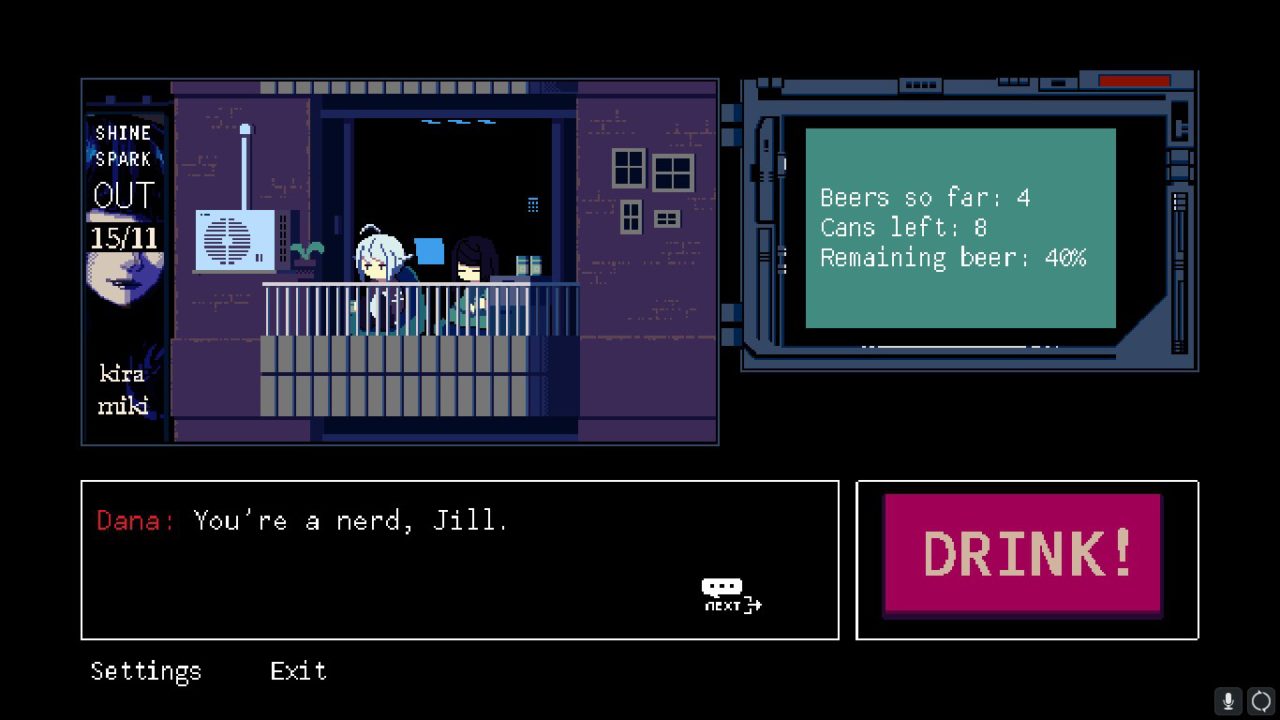 If you’re tired of visual novels that focus on romance, high school, or fanservice, then I highly recommend picking up VA-11 Hall-A: Cyberpunk Bartender Action. It’s very funny but also manages to be relatable and deep at the same time. My only criticism of the game is there is no auto text option and there is no skip text option. Granted, if you hold down the CTRL key text will be skipped, but it will also skip over any text you haven’t read yet. I find these to feature pretty important to a visual novel, especially one you need to play more than once. But that one thing aside, this is a nearly perfect game. It has Steam trading cards and achievements as well, though you may need a guide to get them all. The game also has a cute prologue as well as a short epilogue, and there is still plenty of room for a sequel. I personally can’t wait to see one.