The Whirlwind of PAX East 2017

PAX East continues to be one of the largest annual conventions I attend. PAX East 2017  marked my fifth one. You might think it might get easier, but that cake is a lie. PAX East is so big with so much to see, it’s overwhelming every single year. This year, I decided to focus on a few key areas: panels and indie games.

To mix things up, this year I decided to hit up panels. The first year I attended I didn’t even know PAX East had panels! The panel lines at PAX East are sometimes just as bad as the game lines in the expo hall. Thankfully, with a bit of technology, they’ve instituted panel capacity monitoring to big screens in the halls as well as on the Guidebook app. It gives you a quick glance to see if walking all the way to the room is a big waste of time or if you have a chance to get in.

Scanning the list, seeing so many panels taking on diversity made me happy! There were panels on representation, being allies, mental health, and bullying to name a few. My favorite panel was “A Place at the (Gamers) Table: Native American Nerd Culture and the Rise of the Indigenerd!” with Dr. Lee Francis IV and Aaron Cuffee of Native Realities. Outside of the indie game, Never Alone, I rarely hear about representation of Native Americans in gaming. Their panel had the flair of educating-with-laughter approach that I love and the 100-plus folks in the audience seemed to relate to it as well. 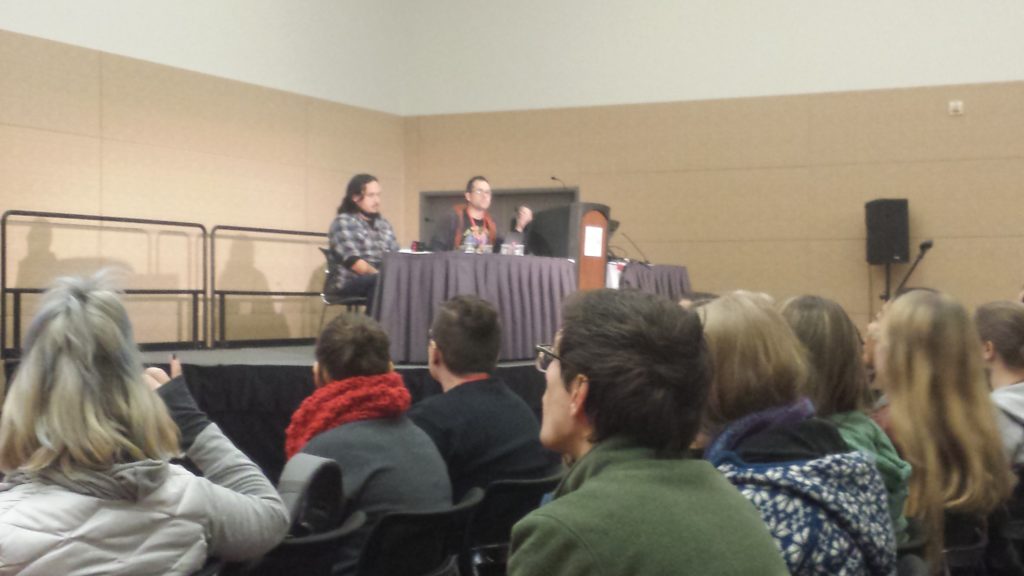 Another panel using a similar tactic was the “Black Girl Gamers: A Safe Space for Black Girl Gamers” panel with Junae Benne, Jay Ann Lopez, Akua Harris, Anastasia Chase, and Xavier Browley. The panel involved the audience in skits to show positive and negative game chat comments and reactions. They also tackled the age-old question of why “girl gamers” versus “gamer women?” In their case, they wanted to make sure that the younger set knew they had a space as well and “girl” fit the bill.

A shout out goes to the “What We Talk About When We Talk About Games’ Healing Power” with Alexa Ray Corriea, Andrea Rene, Brittney Brombacher, and Becky Taylor. The entire panel focused on sharing personal stories of how video games had helped during challenging times in their lives. The beautiful part of the panel was that it was it was designed to open half of the hour up to have audience members share their stories as well. Although some of the stories were heart wrenching to hear, it was beautiful to be part of such a caring community. 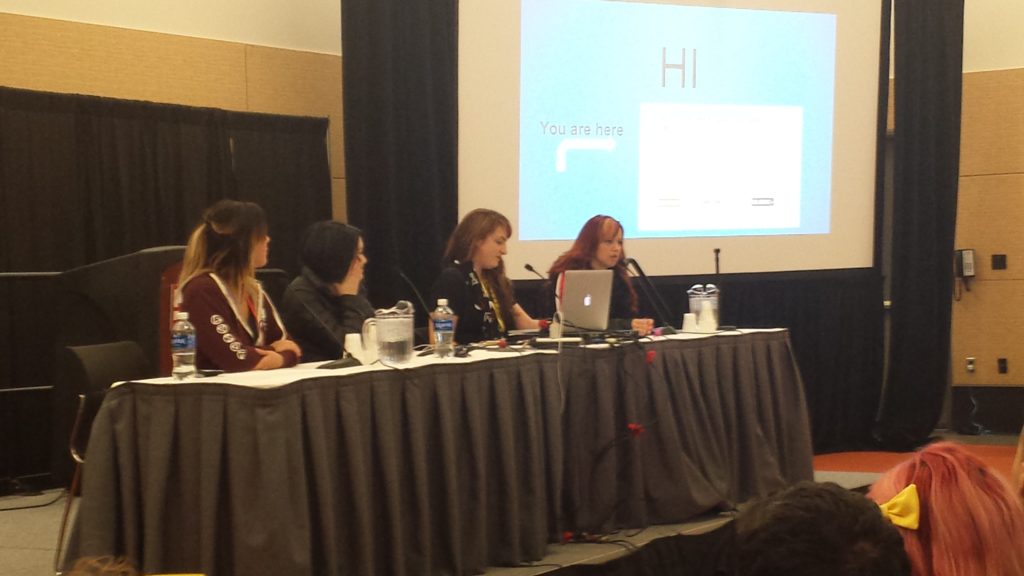 Rounding out the group was the “Why It’s Awesome Being an LGBTQ Ally” panel Tatjana Vejnovic, Johnathan Gibbs, Sarah LeBoeuf, Sabriel Mastin, Amanda Farough, and Tanya C. DePass. Kudos to Tanya DePass for graciously tackling the question of that always, always comes up in these panels, “I’m working on <x> project, how can I make sure it’s inclusive?” (That’s not a direct quote, but you catch my drift. And seriously, this question comes up panel after panel, year after year.) She suggests starting with Google and doing some free research and think about hiring a diversity consultant too.

Over the past couple years, I’ve found the big name game exhibitors less and less interesting. Partly due to the fact that many of the year’s big games are less than two months away from launch and many offer betas and previews. Outside of new tech, like the Nintendo Switch or games that use VR I don’t have, the line wait doesn’t entice me. I’d love to see more of a Disneyland-style ticketing system, so people could enjoy more of the convention and free up space on the show floor.

Since I don’t spend a ton of time with the AAA games, where do I go? The indies and thankfully, PAX East has a good-sized indie games section. 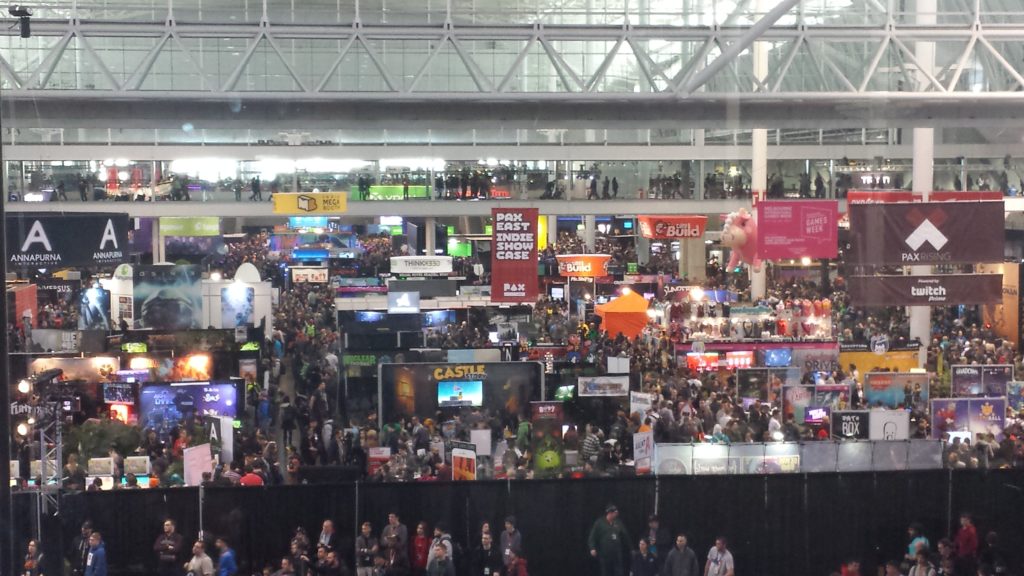 Steven Universe – Save the Light

Before heading to the floor, I hit up the Saturday morning “Cartoon Network: Going Indie With Steven Universe & OK K.O.! Let’s Be Heroes” panel with Chris Waldron, VP of Digital at Cartoon Network, Ryan Harwell, Director of Digital Development at Cartoon Network, Dan Vader Lead Writer and Designer at Capybara Games, Chris Graham, Creative Director and Founder of Grumpyface Studios, and Conley Smith, Illustrator for Wake Robin Games. I was shocked that the panel room was not packed to the gills, but that’s probably the fault of the early morning Boston snow, below zero wind chill and it being a 10am panel. 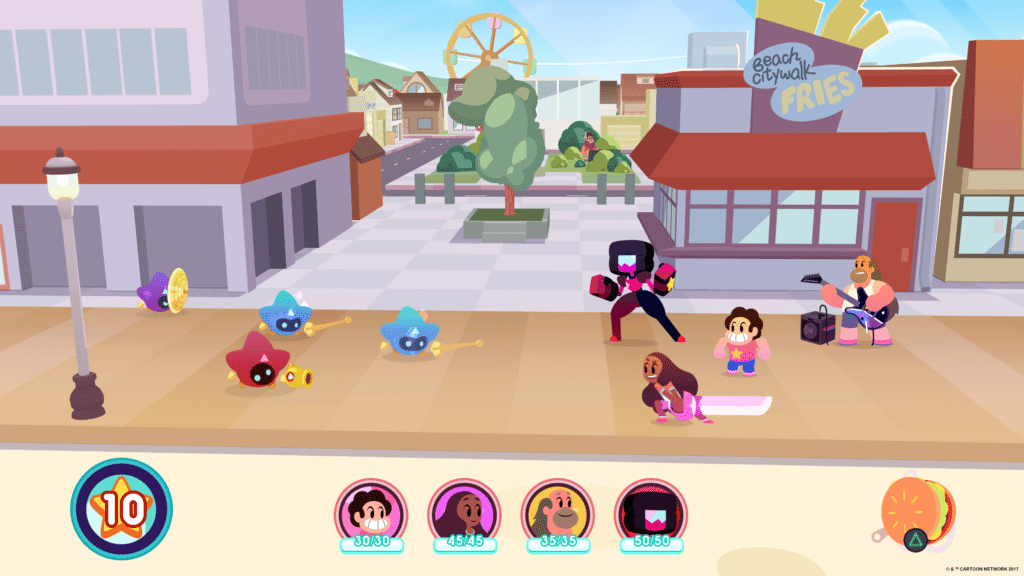 Grumpyface Studios worked on the first game, Attack the Light, for mobile and they’re back working on Save the Light for console. Steven Universe creator Rebecca Sugar has been working with Grumpyface Studios on the story for the new game too. One of the impressive takeaways from the panel is the partnership between Cartoon Network, the shows’ creators and the indie studios developing the games. There’s a real care that goes into the making the games.

I also caught up with Francesca Carletto-Leon, co-founder of Contigo Games, to chat about their upcoming game, StarCrossed. In this two-player cooperative game, each player can move around freely. To defeat enemies, players bounce a star between themselves. Think of it as a Magical Girl-esque space Pong. Although the game was designed with a femme aesthetic–“very pink, very sparkly”–of the five heroes, two characters are non-binary and will be referred to with non-gendered pronouns in the during the story mode gameplay. Per Carletto-Leon, at PAX East, those two characters have been the most popular. 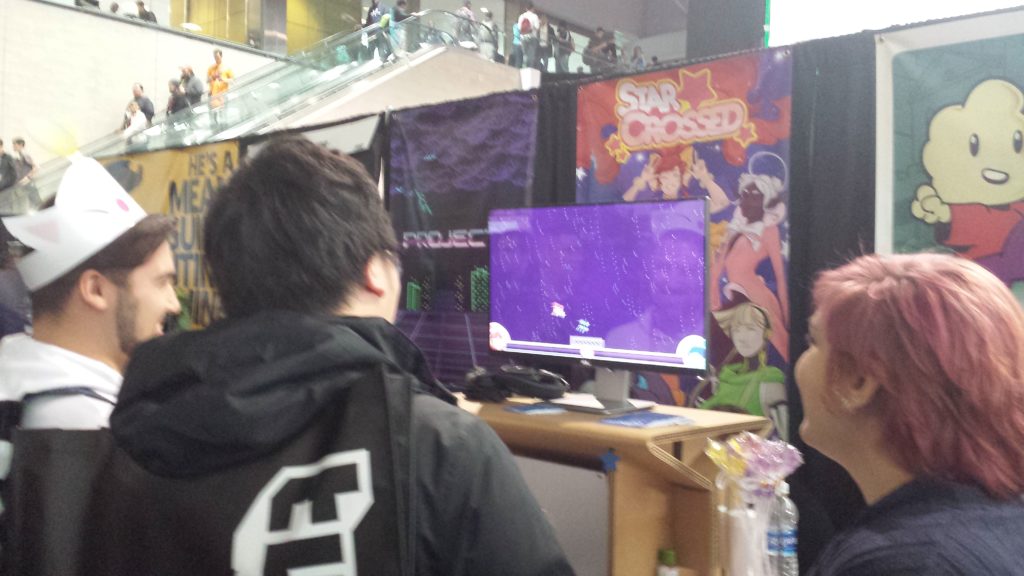 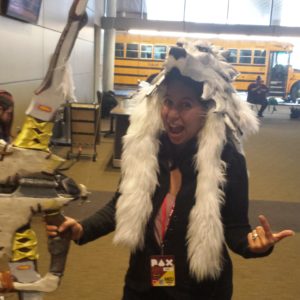 I was absolutely tickled by a little game called Serial Cleaner. You play as a crime scene cleaner stealthily avoiding the police. Dashing between trailers and hiding behind trees, you have to plan a bit before whipping out your vacuum to suction up all the crime scene blood. You also need to move bodies and pick up weapons, but that vacuum really sold it for me. Unfortunately the game isn’t available until summer.

As exhausting as this sounds, there was so much more to my PAX East adventure than this. Between the Diversity Lounge where I spend all my money, Bit Brigade’s Megaman II speed run concert and the general awesomeness of this year’s PAX Enforcers, I know I’m leaving a bunch out. If you were at this year’s PAX East, pop a note in the comments with your  adventures!