Indigo Panics: In the Beginning

In a galaxy very, very close, exactly one lifetime ago… From this time, there is hardly any history, as MySpace was not yet invented, so no one could immortalize their memories without leaving the comfort of their homes. Princess Leia–uhhh, Indigo–takes up one controller in their small hand. It is the start of a lifetime looking at screens. It is a new game system. *Cue Star Wars theme*

That was the Nintendo Entertainment System (NES), and I wouldn’t realize it for several years, but that console would promote a whole facet of life that would affect me for many years to come. The first game I ever played was Duck Hunt at the age of five or so. I was fairly terrible, missing about twice as often as I hit. It was, perhaps, not the best system for my particular skill set. I had a bit more luck with Contra, which I played only once or twice with my sister. More often, I would play it by myself, though my memories are scattered and blurry.

It’s true, then, that the system which cemented video games into my future was the Nintendo 64. To this day, I own three separate systems (back up for my back up). And if you say to me “there are emulators,” well, whatever. But I digress. The 64 was the first game system I ever received as a brand new present instead of a hand-me-down. It was wrapped and new, and it came with Donkey Kong 64, which is one of my favorite games to this day. I still have a Nintendo 64 (no, you have three, do go on), because it’s frankly the only system I’m any good at. It’s taken me no less than 18 years to be good at it, but it gave me a foundation for more recent systems. These days, it’s beneficial to actually aim for the ledge instead of just left of it, which is a change.

Wait, Indigo, does this mean you’ll only be reviewing games that are like, 20 years old?! No, of course not, and those games are 20 years young, thank you. I can still beat Pokémon Snap in one sitting, and I can even do it drunk now. Donkey Kong 64 still holds up as a game with a wide range of mechanics and just enough throwback that I want to play it over and over. Super Mario 64 paved the way for a lot of other 3D platformers. And Yoshi’s Story is the epitome of cute, THANK YOU.

But I digress. My beginning story is not as strange as my middle story, though. I actually stopped playing video games for years between the ages of 11 and about 16. It was common for my older (and therefore cooler) sister to play with the neighbors, and I was usually kicked out for being small and puny. In the dead of night, I would steal downstairs and ruin all their saves just to make my sister angry. Okay, that last part isn’t true. I just didn’t play games for a long time.

I was used to the idea that boys were much better at games, and the market certainly seemed to confirm that. So I quietly sat in the back and watched. It earned me a great many friends who wanted someone to appreciate their games without them having to share. And at the age of 16, I found the Game Boy Advance SP that I begged for. It was a Christmas gift along with four wonderful games. And some clothes (yuck). I began playing Spyro, which had been a favorite for many years. I fell back in love with 8-bit, 16-bit, and whatever bits I could play. I dug out old systems, and I replayed easier games. It was important to work my way up, much like a warm-up before a workout. I lost friends who suddenly found that I wanted a controller too. That’s a lie too. I never had friends.

And here I am today. I’m an unusual voice in games. I don’t play them as regularly as others, but I would consider myself immersed in the culture. I still thoroughly enjoy watching my boyfriend play games like I did in my early teens, but I also take up a controller when I can. In particular, I fight to play more platformers. I’ve consistently been drawn to Kirby and Yoshi through the years. Cute games like these and Little Big Planet are easy for me to play because they don’t feed my anxiety.

But the number one thing that makes a game I will love is the type that doesn’t have humans (or realistic ones anyway). Most of the games I’ve mentioned don’t have human characters, though I do enjoy games like Rayman and Mario. The humans in games that I do like are usually in a cartoon style, and I’m not usually going to be creeped out by them unless they’re intending to be creepy. I think this has to do with how women are still portrayed in games. The idea of running around as a bikini-clad thin woman is unappealing, because I can’t relate to that character. It’s almost worse if a realistic woman is your companion, because you always have to look at that character.

Look, I’m not a typical reviewer. That’s why you’re here. The real reason you might want to read this right now is because I can offer a different perspective on games. I’m not captivated by “new and outrageous” ideas (unless they are actually new and outrageous), I don’t accept bikinis as armor for women just because they’re women, and I’m more likely to not have followed ridiculous plots for years out of nostalgia (ahem, Metal Gear Solid).

So welcome, friends and colleagues, to Indigo Panics! I’m a new reviewer with a unique perspective on games. It’s a pleasure to meet me, I know. 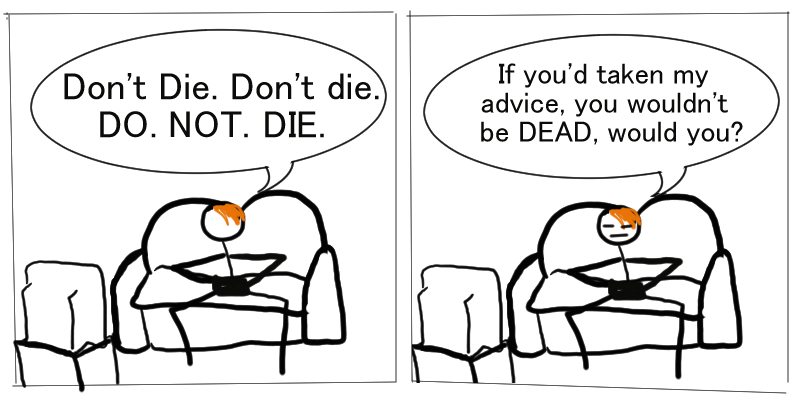 Read the rest of the Indigo Panics series.