Makers of Tampon Run Tell It like It Is: A Girl Code Review

There’s a good chance that you’ve heard of the endless runner web and phone game Tampon Run. If you haven’t seen it, go play the cute and strangely addictive game where you throw tampons at bullies and try to combat the menstruation taboo. The game became an internet sensation when it debuted in 2014 for its cheeky subject matter and the fact that it was made by two teenage girls at a free summer program called Girls Who Code. 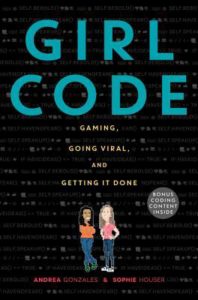 Girls Who Code is a free, international organization that teaches middle and high school girls computer programming and coding. Reshma Saujani founded the organization in an attempt to close the gender gap in technology and programming jobs. Instructors work for free in schools, libraries, and community centers to encourage and empower girls to be excited about STEM fields.

Girl Code: Gaming, Going Viral, and Getting it Done is written from the alternating viewpoints of Andrea Gonzales and Sophie Houser, the creators of Tampon Run. Written for a teen audience, the book is conversational in tone. Each girl, now college-aged women, alternates chapters narrating how they got involved with coding, attending Girls Who Code, and meeting each other to work on their final project Tampon Run. The book has pictures of the girls and text messages between the two of them interspersed in the narrative.

At first glance the girls couldn’t be more different: Andy is first-generation American whose parents are from the Philippines and who feels the weight of expectations to be a doctor, lawyer, or engineer. Sophie is white and while at first seems like she lives a perfect, hipster teen existence struggles with anxiety to the point of tears when asked to talk in class.

Each girl has a distinctive writing style and sense of humor. Both of their writing improves as they warm to their story and get more passionate about what they are doing. One of the things I appreciated the most about this book is how candid they were about their hopes, fears, and passions. Both girls clearly love to code and care deeply about feminism, but they are also still teens.

They aren’t sure what they want to do with their lives yet. The girls get a few opportunities to test out start-up culture, game jams, and internet fame. They love writing code, but they love other things too. Andy specifically talks about her love of piano and how she struggled with having to let it slide a bit during the height of her Tampon Run fame. Sophie isn’t sure she’s cut out for a life of internet fame or the pressure of start-ups. It’s nice to have a different option from the typical “wunderkind” narrative that allows the girls to have doubts and be actual human beings instead of stereotypes.

One of the most interesting and frustrating passages in the book is when the girls talk about their time on the Jay Thomas radio show and the misogyny they encountered there. Thomas suggested a video game called “Condom Fight” where “you fight to make a hole in the condom and impregnate the woman!” This is a joke that he made to teenaged girls who were on his show talking about using their skills for feminism and to help other girls. What a dirtbag. Of course, it’s not surprising to hear grown men being really inappropriate to teenage girls, but it’s still shocking and upsetting.

This is a great book to give to a teen girl in your life who either is already interested in coding or could use an inspirational story. Andy and Sophie are approachable and relateable for fellow teens, and it’s interesting to hear their take on internet fame. Additionally, there is a section of coding practice and tips at the end of the book for budding programmers. I’m excited to see where these women end up next.