One of the things we love most about gaming is the ability to lose ourselves in other worlds. If our gamer motivation profiles are anything to go by, it’s clear that immersion is high the list of elements we look for in a game. We are the kind of people who take the time to truly explore our gaming worlds and really, really get to know the companions that accompany us while we are there.

Today we’re taking it one step further with a flashfic challenge by writing ourselves into our favourite/current game worlds. Care to join us? Leave your 500 word flashfic in the comments!

The portal opens and they stumble through, a darling enby suddenly cloaked in a long hood covering their form. The red headed knight smiles at them.

“Hey, I’m Ana. Get ready to fight our wars for us. Trust us, the other people are totally bad, and also you can summon people with these orbs. Here, take some.”

The enby grabs the orbs and shrugs. “Okay, but how do I know who I’m summoning?”

Ana laughs. “You don’t enjoy finding tons of orbs and just hoping you find someone who can handle the situation?”

The enby spends tons of time trying to get an orb to summon their lady loves to help fight and ends up with a cute group of girls.

Ana looks at the pile of men sitting in a corner, asking,“So are you going to train them?”

The enby shakes their head no and says, “Nope, they can just sit around. Enjoy waiting, nerds.”

Enby interrupts, “Not gonna fight with people I don’t like, and I don’t like men. Anyway, let’s get going, girls! Will we hit the paywall!!”

Stay tuned until next time when they hit the paywall. 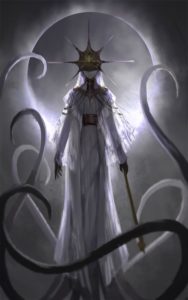 Heavy metallic footfalls resounded on the cold stones of Anor Londo as I led my goddess quietly through looming hallways that seem to desire to subsume us into their decaying histories. This was her domain once. She upheld the rule of her family beyond their deaths and departures. She held the very sun in the sky and brought hope to those to still held onto the old ways. So I am told. And I do believe these teachings. I have served the Dark Sun Gwyndolin my whole life. She is the most powerful and beautiful woman I have ever seen. Older teachings, apocryphal ones, say that she was designated a boy at birth but was soon after raised as the girl she truly was,  once the old god Gwyn saw his daughter’s capacity for moon magic. This had always been heartening to me.

But that…thing. Aldrich they called him. A so-called priest Sulyvahn brought from some demoniac cathedral far to the east. I have lain my eyes upon its vile corpulent flesh and know it seeks to devour all good things. Gwyndolin made no sounds as she followed behind me, keeping pace easily.

“Art thou sure, disciple, that we must flee from the tomb of Great Lord Gwyn? Mineself, Gwyndolin, can certainly casteth this Aldrich from our lands.”

“Dark Sun Gwyndolin you have believed me, your humble disciple of the Darkmoon, thus far. You know there is something terribly wrong with this creature Sulyvahn has enticed to come here. Aldrich seeks to consume all things, I saw it in its gaze. It hungers for you.”

“I believe you speaketh the truth, my disciple. You have been steadfast in your devotion to the Dark Sun. Escape we shall but this creature will not taint the house of Father Gwyn and Sister Gwynevere while I take breath. They shall both receive their painful atonement upon mine return.”

Heavy metallic footfalls faded behind me as I led my goddess under cover of darkness out of her storied ancestral home onto the cold damp grass. I felt deep inside myself that we had avoided a terrible fate and that the future was yet undecided. I prayed silently to my goddess even as I held her hand that she would grant me the strength I would need to protect her.

She’s aware that the country has fallen into turmoil, that there’s a civil war at their doorstep, that the Blight spreads across Ferelden like a god’s dark shadow. The words come, regardless, and she scribbles them by candlelight as, elsewhere in the estate, people with important jobs bicker over who will lead and who will follow and whose head will roll. She knows this ought to interest her, but despite the fact that so many will surely die in the upcoming conflict, she can think only of the way the rest of the Arl’s household must keep up appearances, buzzing about from one task to the next as if the world isn’t ending only miles away.

She imagines the Darkspawn breaking through the doors, flooding the halls with stink and violence and hot, running blood. There are only so many guards. Who will protect the servants when they fall?

She imagines herself bludgeoning a Horlock with a candlestick, or one of the gardeners gutting an ogre with a trowel. It’s a grisly scene, and yet she thinks of the manure and offal they spread in the gardens to make the roses bloom big and red. Perhaps Darkspawn blood kills, but that’s unimportant, because her mind is working quickly and she leaves a cup of tea to cool as she scrambles for paper and ink.

The last line comes first, as it so often does. She imagines the staff raising what weapons they have to fight, even as their betters gallop away. She imagines barring the doors and holding the estate while the true victory happens elsewhere, the fire of valor alive in their hearts. She imagines a stinging hive of bees swarming a predator, working as one, barbs at the ready to defend their queen.

“Mind that you don’t trespass,” she writes in looping, scattered script, “for the gardeners do sting.” 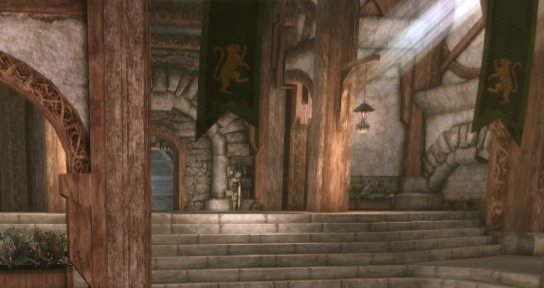 I think my neck is broken. Again. It is seemingly never ending, this trap that I’m in. I swore that I would never become my father’s daughter, yet here I am fighting endlessly, reborn over and over to fight for their entertainment. Wretched men drenched in gold and jewels, bidding on our lives as we break each other over and over again until one of us is deemed fit to be crowned the winner. What does that even mean? How does one ever win when you’ve killed so many, lived and died a thousand times? When you become the victor of death and destruction what is your reward?

When I was a child they told us that we fought for the realm. That those who won would receive what every person wanted–dreedom. Well every person except me, I believed I was already free. Though who amongst us every truly is? My father trained me from birth to be something that no parent should ever hope their child will become: a killer. It’s all I know and all I am good at; I have fought in every reality and died in all of them too. Where is the most beautiful place to die, I often wonder, though when your skull is split in two it’s remarkably hard to try and remember the details.

I’ve lost count of the times that I have died, innumerable moments that should have been final, yet they never are. I always awake, once again ready to fight. For so many years I was fighting for something that I believed in to protect a man I believed to be father, who created me to be nothing more than his blood soaked legacy. But today everything has changed. Because today I killed my sister for the thousandth time. Yet she wasn’t my sister. As I stood over her lifeless body, I heard a voice, one that told me that this woman before me was not my sister, but a daughter of sorts. A monster they cast out of my blood and bones to take my place when this cursed life finally ended. She was broken though, flawed, and I was stronger than he ever could have seen, so it never came to be. She became nothing but another sacrifice for this daily war my father waged against everything.

So now. Well, now I fight for freedom, for me, for my true parents, the ones he stole me from. This man who raised me as a murderer, to do nothing but kill and maim and die for him, wasn’t even my blood. He was a fraud and now I know who I am. I am Kitana of the Edinia realm, and all of my life has been a lie. Now I know what I must do. What my legacy will be. I have only one thing I must do before I die for the final time. Kill Shao Kahn.