Art is one of the most crucial factors for me in game design. Obviously, the way a game plays is important, too.  But If I’m going to be spending a few hours staring at a game, the art better be something I like. 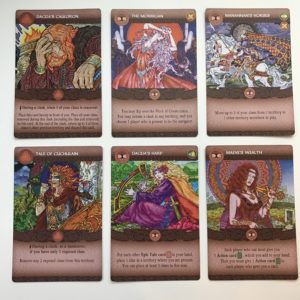 (Image: Anna Tschetter) So much Celtic scrollwork and 1980s makeup!

Inis gets it right in the art department. I love the Celtic-art-does-acid affect. It’s beautiful and weird and yeah sometimes the ladies have big balloon boobs but I don’t care. Look at these beautiful cards!

I think the art is beautiful and unique in it’s own right. I’m trying to think of another game’s art that I find as charming or as intricate. But the art also reminds me of some of my favorite book covers growing up.

As a teen I read a lot and while I liked the library, I often just read the books in our home library – lots of 1970s paperbacks that my parents read in college. Why is this related to Inis? Because those paperbacks had the BEST art of all time. We’re talking super late 1960s and mid 1970s illustrations.

One of my favorite series was Evangeline Walton’s four book series about the Welsh Mabinogion. These covers, by David McCall Johnston, are some of my favorite book covers of all time. Seriously, I would absolutely get a blown-up poster of the cover of the Song of Rhiannon if I could and stare at its trippy loveliness all day long. I mean, I love the epic tales of the books. But those covers! Not only do the covers remind me of Inis, but some of the Celtic tales of the Mabinogion actually make an appearance in this game!

Before I’m done talking about how amazing the art is, I will just leave with you the fact that Jim Fitzpatrick is also famous for two other notable works of art: the iconic picture of Che Guevara seen on every college dorm wall or T-shirt, and the album covers of the Irish rock band Thin Lizzy.

Here’s how you play:

The goal of Inis is to become King of Ireland. Or Queen. One of my rules when playing a game is that I must be able to play as a lady. Inis uses miniatures and has four different types. One of the four is definitely a lady — see balloon boobs of the figure on the far right — but another is fairly androgynous so I imagine it’s another lady or just a non-binary person. It matters to me that a game isn’t just all dudes all the time. I appreciate that Inis made at least an effort in that realm.

The rules of Inis can be a bit tricky but don’t be discouraged! Basically you can win by fulfilling one of three different conditions that sound much more complicated than they actually are: be present in six different territories; be present in territories that have a total of 6 sanctuaries; or be chieftain over six little plastic figures that belong to the other players.

How to do this? Well there are some little piddly rules that I’m going to leave out because it’s boring. Come at me, tabletop bros! But the gist of it is that you use cards to put clans on different territories. The game board pieces are, par for the course, trippy as balls and reminiscent of the Celtic triquetra. Clever.

Using a base set of cards (green cards) that you draft between the other players at the beginning of each round, you are able to move your clans into new territories, explore new territories, add new pieces to the board, and “clash” with other clans. These basic green cards are the same every round but you can do special actions by acquiring the red “Epic Tale” cards that I’ve used (which feature the aforementioned psychedelic artwork). These give you special actions and you don’t have to share them in the draft with your other players. Additionally if you are chieftain, (That is, you have the most clans or miniatures in a territory), you can claim the territory card which also gives you an extra action you can use.

Each round you play through your green cards, territory, and epic tale cards performing the actions: exploring, clashing with other clans, building sanctuaries, etc. After everyone has either done all they could, or passed, you check to see if any of the victory conditions have been met. If anyone is present in six different territories, present in territories that have a six sanctuaries, or chieftain over six other little plastic figures, then they win! If not you redraft the cards and play another round until someone meets one or more of the conditions.

There are a few more rules and again, I think they are tedious to go over here, but once you get the hang of it it’s a great game. Because of the rules and the fact that honestly there’s just a lot going on, it’s one of those games is really awesome…the second time you play it. Other than the amazing art, the best thing about Inis is the combination of different game mechanics — the card draft, the building of the game board as you go along, the multiple ways to win — in a new way. If you like art, Celtic mythology, and a way to combine some different gaming mechanics, I’d recommend checking out Inis.