I have never won. I never really have the time or mental space to devote to the game. Between the permadeath and increasing difficulty, I’m dead pretty quick. Permadeath sounds like a metal band, but it’s an important element to many roguelike games.

When you die in the game, you die. You only get one life, just like in real life.

Thanks to my hubris, busy schedule, and permadeath, losing is an inevitable fact. Plus, I don’t even want to win. Actually, that’s a lie. I have tried my hardest to beat Brogue, by reading up on strategy, taking it slow, stopping to think out each move. I even prayed to the RNG (Random Number Generator) that rules the dungeon.

Each time I asked: Hey RNG, am I gonna live?

And each time the RNG answered: 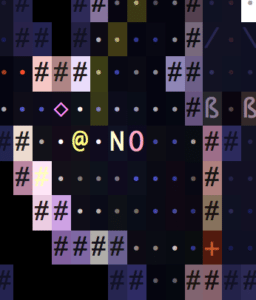 When I first started playing, I tried so hard to win. I played and played, but I lost and lost and lost some more. I restarted the dungeon with fresh froth and rage. Each time I died, angry at myself. But over time, I’ve come to accept my dungeon mortality. Restarting over and over has its own rhythm. Even though there’s no carry-over between games, I still carry the memory of what I was doing last game. I look at my high scores and recount the saga of my slaughter: 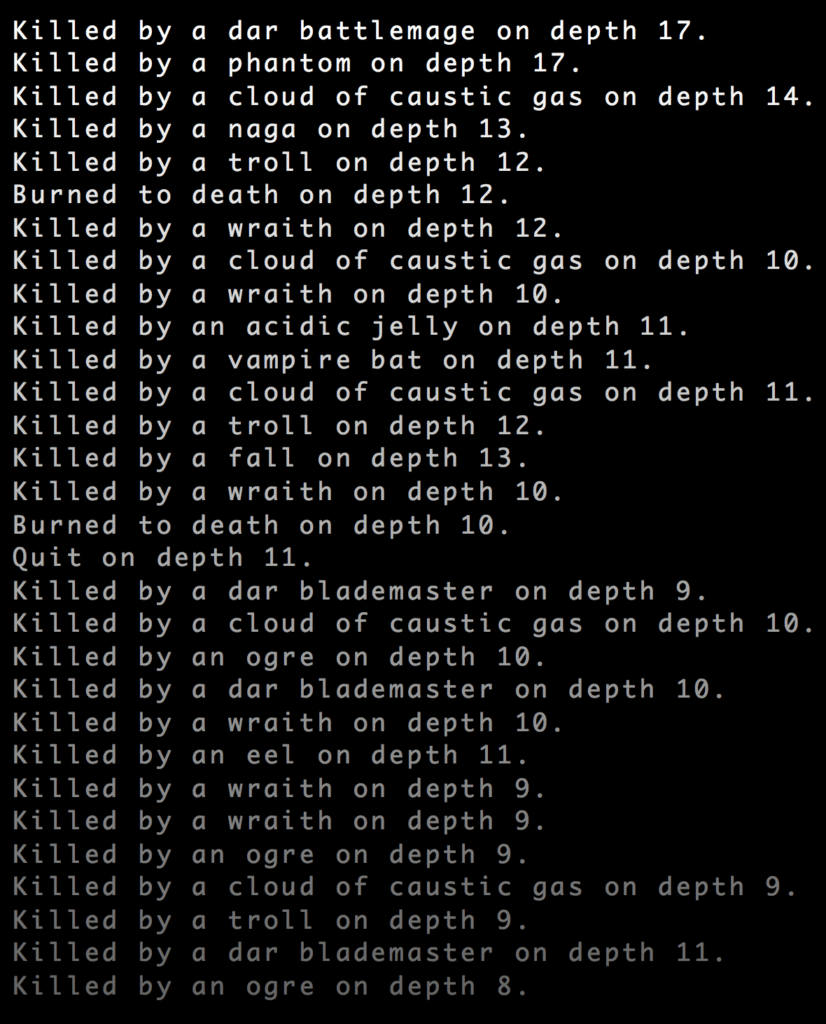 Look on my failures and despair!

Reading over these deaths gives me a kind of perverse joy. I cropped out my scores, not out of shame, but because they don’t concern me. Killed by an acidic jelly, burned to death, killed by an ogre, killed by a cloud of caustic gas, killed by a phantom, quit. (Was it that hard?) It’s a narrative of death and rebirth. It’s a diary of my missteps, small mistakes, and reckless adventuring.

Death Has its Perks

After I gave up trying so hard to win, I stopped feeling so frustrated each time I died. I stopped competing against the internalized perfect player and started playing like myself. This isn’t some narrative about letting go of expectations to help yourself achieve success. If you’re anticipating that, you’re wrong. I still die and lose. But I die terrifically and have fun doing it. Another bonus of dying so often is getting to appreciate the subtle differences in the dungeon with each play. With a procedurally generated dungeon, the more you die, the more variations of the dungeon you get to experience (albeit, shallow levels only).

[pullquote]I still die and lose. But I die terrifically and have fun doing it.[/pullquote]Dying in Brogue is its own meditation. I keep playing and I keep dying. Eventually playing is dying, and dying is fun. Sometimes I’ll dip into the Dungeons of Doom after a long day at work when my brain is tired. I soften my focus, hit the autoexplore button, and try to craft bits of chaos, tossing potions willy nilly, diving deep without preparation. If I were intent on winning, I would have to be alert and make each action with consideration. But after a day of exchanging my alertness and consideration for income, I just want to make a mess. 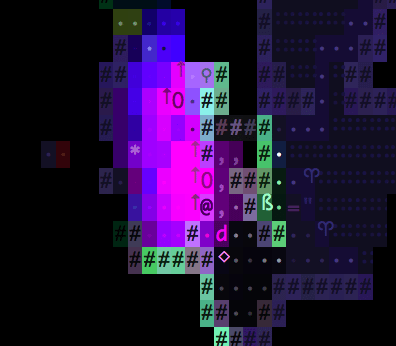 Getting gassy with some (O)gres 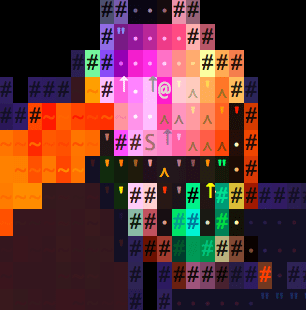 Just like how well-written characters need flaws to be interesting, I need to play in a flawed, very personal way. I embrace recklessness, sowing chaos in the Dungeons of Doom, set clouds of combustible gas alight, take a blind leap down holes in the floor. It’s fun to embrace my avarice. In real life, I have the habit of opening presents early. In Brogue, I can get away with it it and, my girlfriend won’t yell at me. When I find alluring armor or weapons, I try them on immediately. If I end up with a cursed -3 Sword of Plenty that clones my enemies, so be it! I’ll do my best to wriggle out of the scrape. Plus, a Scroll of Remove Curse is the most useful if all your gear is cursed. I also get a little greedy with random potions. Having 3 aquamarine potions and not knowing what they do is pretty dull. Why not take a sip and see if it’s a Potion of Life… or a Potion of Incineration?

You might say, “Beware! The Dungeons of Doom contain enough peril and traps! Why add your own folly?”

My response is, “It is better to have fun and die, than to play like a robot.”

Try out some of Ty’s Tips to Die Like a Brogue, and let me know if you think dying is fun.

I’ve been playing Brogue for years, but I just recently learned there is an Easy Mode: 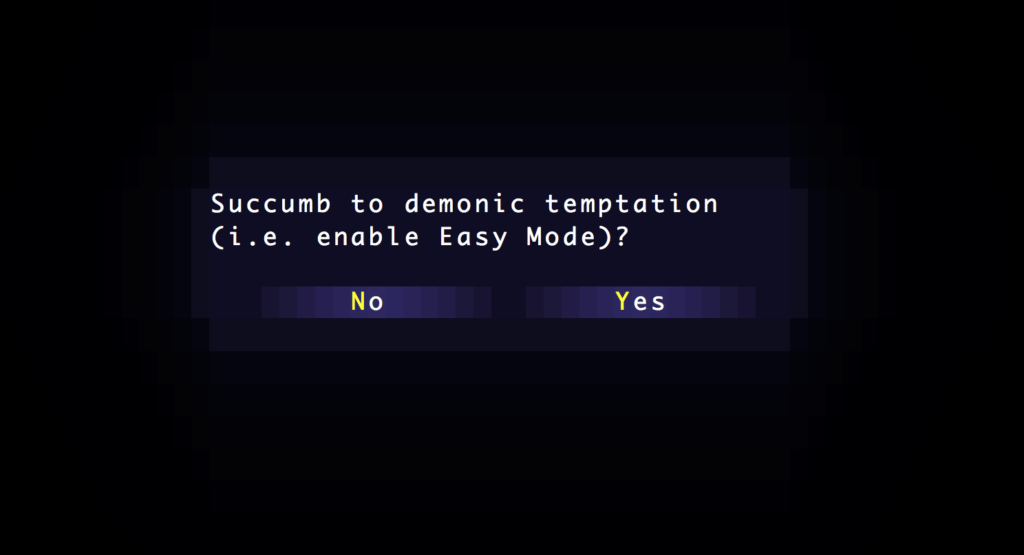 Should I succumb to demonic temptation?

I’m not sure I want to try it, though.