Actually, the fact that –indeed– women play video games isn’t really news anymore, thanks to the Entertainment Software Association annual reports, despite being kicked out of the focus groups somewhere in the early ‘90s thanks to niche marketing. But the prevailing notion that women are largely casual players still seems to serve as clickbait for game sites, also thanks to those same reports. Game analytics consulting practice Quantic Foundry’s latest gaming industry survey attempts to break down the numbers:

“By bundling across platforms and genres, this 41% [ESA] statistic doesn’t surface how the percentage of female gamers does or does not vary across genres, or how large that variance is. Using survey data from over 270,000 gamers on the specific game titles they enjoy playing, we’ve put together some findings on the percentage of gamers in different genres that are female.”

There is a lot of interesting anecdotal information in this survey, but before anyone starts to dig into the numbers, it’s important to read the report’s disclaimers regarding the sample of gamers surveyed. Most notably, the traffic source:

And of course, the gender breakdown:

Right away, it should be obvious that this survey’s results do not represent a true cross section of gamers, despite the 270,000 participants involved in comparison to the 4,000 households surveyed by the ESA. Larger numbers do not mean accuracy. The women responding represent 18.5% of the total or less than half of the ESA’s estimation of overall women playing games. As such, the self-selected nature of the survey coupled with the very particular traffic sources call the results into question, especially versus what could be determined from a random sampling of subjects.

This is something that Quantic Foundry makes very clear:

“It is difficult to get a representative sample of gamers across genres and platforms due to the breadth and variation of gaming. Here at Quantic Foundry, we recognize the generalizability problem and hope to work on it in two ways. First, we’ll provide descriptive statistics around each sample so readers can interpret the findings with the sampling biases in mind. Second, we’re hopeful that the profile tools will allow us to attract more representative samples of gamers over time.”

“Compared with the ESA 2015 factsheet of all gamers, our sample has a far higher proportion of male gamers and the average age is far lower. This seems to be because our sample consists of a higher percentage of core gamers (the top game genre in the ESA sample was social games, followed by puzzle games) with a skew towards PC gamers”

Game sites tend to be frequented by and biased toward a particular audience that encourages “gamer purity.” Certain gamers may not want to reveal their dark Candy Crush secrets to their Halo or Call of Duty playing friends. To better understand Quantic Foundry’s Gamer Motivation Profile, let’s walk through the steps where we find questions like these, to which I responded: 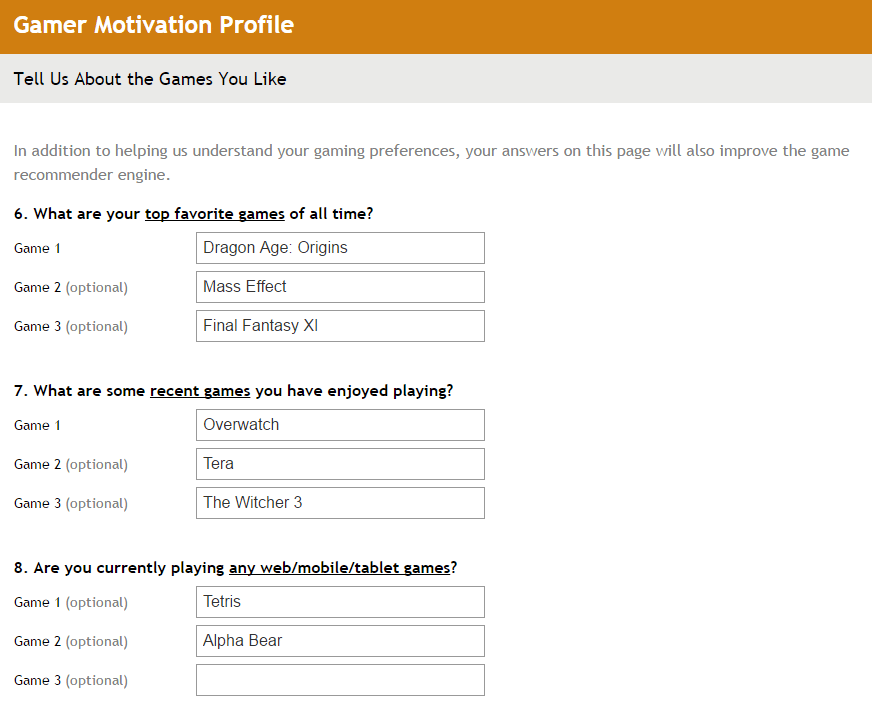 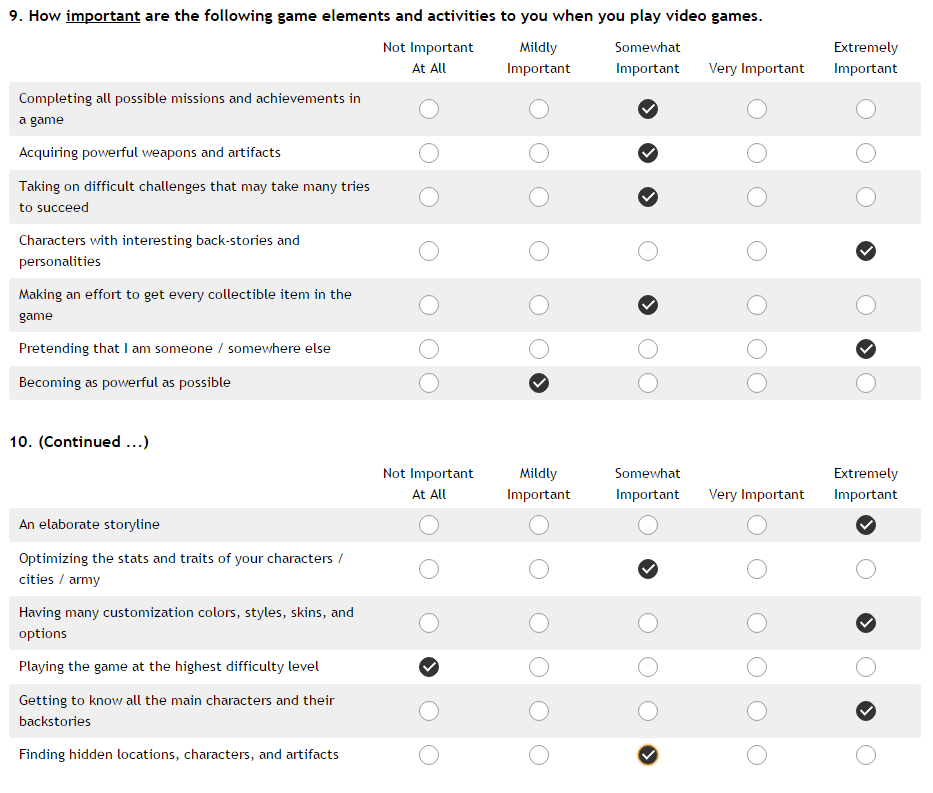 Individual results look like this, in direct comparison to other survey participants: 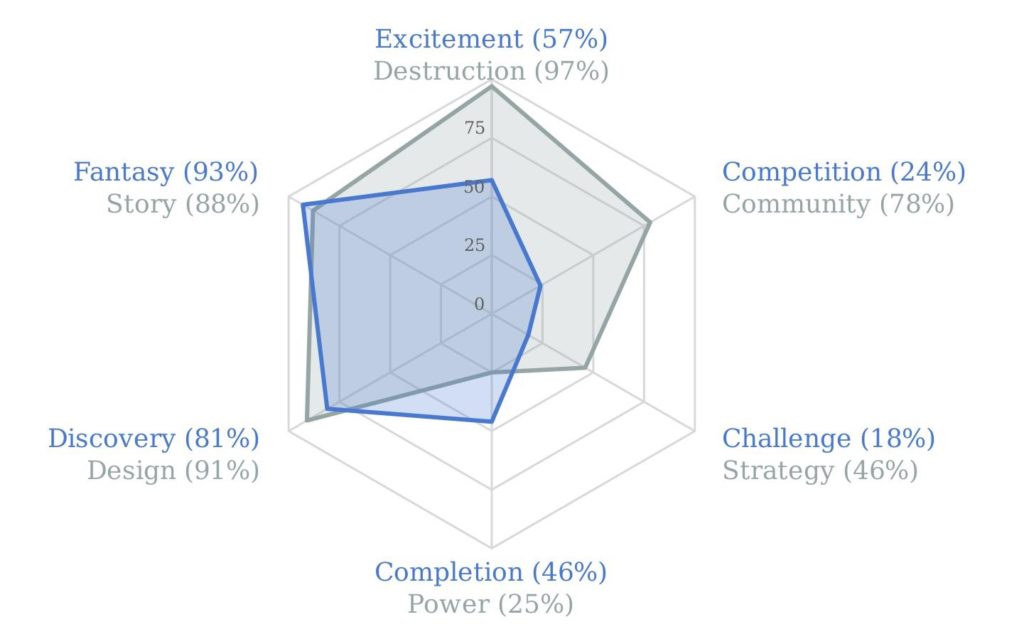 Based on the above, Quantic Foundry has determined that my play style is “Action-Oriented, Spontaneous, Relaxed, Gregarious, Deeply Immersed, and Creative” and will use that information to recommend games to me, to compare my style with other participants, and to formulate reports such as the one we are currently discussing, as well as their December 2016 report on gaming motivations. The latter concluded, among other things, that the most common primary motivations for men are competition and destruction, while women prefer fantasy and completion. The results also identify age as a significant factor, with competition dropping to ninth place for older gamers, in comparison to first place for younger gamers.

The results of the gaming motivation survey did pop up on the radars of some gaming sites, but not many, and to very little fanfare. But a survey that, without proper context, can be used to perpetuate the belief that women are just filthy casual gamers? Now that’s news!

To be fair to the game sites, it should be noted that Quantic Foundry’s headline “Beyond 50/50: Breaking Down The Percentage of Female Gamers by Genre” and the feature image for this report are just the kind of elements that inspire and perpetuate the gaming industry’s misogynistic mentality that the survey is trying to debunk. The previous report offered a break-down specific to both men and women, but this report is entirely focused on what women are playing. Where is the corresponding information on men to balance the report?

While the context of the report does give some weight to the findings, the subsequent reporting by game sites seems to largely rely on skimming the pull quotes and headlines and posting a chart or two. This leaves ample opportunity for the information to be misconstrued, particularly by people who want their biases confirmed. For example, with just a quick scan of the article, I can disregard math and compose the following alternate facts:

Then I can toss this information onto the internet, preferably with none of Quantic Foundry’s disclaimers included, so that gamers who are certain that women aren’t “real gamers” can confirm their bias. Fortunately, diving into the comments on some of the game sites isn’t the toxic cesspool it could be, and some of the readers identify the problems with reporting the numbers out of context. On the Polygon piece, GarickWinter writes:

“Put differently, this tells us what percentage of a genre’s audience is female, not what percentage of female players play games in a given genre. The numbers are still interesting and potentially useful, of course, but I think it’s important to be clear about what the numbers here are actually referring to.”

Comments on the source material also provide useful insight into the data, with thoughtful questions and commentary, to which Quantic Foundry’s co-founder and analytics lead, Nick Yee often responds with further clarification.

While gaming sites are still focusing their presentation on proving that women are casual mobile gamers, without taking into account how the data can be skewed and interpreted–or rather, encouraging that misinterpretation–information in Quantic Foundry’s reports is still important to the gaming industry and I encourage readers to create their own Gamer Motivation Profile to help broaden the survey cross section.

It’s also important to realize that the Quantic Foundry survey is not meant for average gamers like you and me, even though my gamer profile might find me an interesting new game or two to play. Nor is it meant to prove anything to hardcore or casual players, as it can be used by sites geared toward establishing the difference between the two types of gamers. The purpose of an industry survey like this is to help the industry better focus its creative and marketing resources to make better games, for everyone.