A death foretold happened last week: my laptop, which I had bought pre-owned, died after approximately three years of use. I admit it, I might have played a big role in her demise. I put her through thousands of hours of more intensive gaming than she was built to handle. I know there is a chance that she can still be salvaged, although not in my current financial situation. So, these days, I find myself without a computer to work and play on. It’s a pretty tough spot.

To remedy the work part, I bought a pretty sturdy bluetooth keyboard for my iPad, and that solved the problem well enough, but what about gaming? There is no way, under any circumstance, that I was simply going to hang around and sulk and wait who knows how long to resume gaming as usual. No, when life throws you lemons, you play some weird mobile RPG games and write your column about it.

I decided to go ahead and download a few free-to-play games on my iPad, and I have to admit I was quite skeptical visiting the app store. My search for “RPG games” yielded some interesting results. Some weren’t RPGs at all; some were turn-based, which I don’t like. Some, particularly the anime-styled ones, looked so busy in the screenshots that I had to pass. But, thankfully, it didn’t take too long before I found something that looked familiar. I found this game called Arcane Legends, and I thought, haven’t I played this before? Turns out, what I had played, circa 2011, was Pocket Legends, an older game by the same developer. I remembered I had really liked PL, so, of course, I would give Arcane Legends a shot. We were off to a good start. 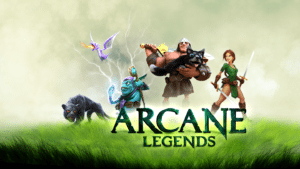 Arcane Legends starts by letting you choose between three classes that correspond to warrior, rogue, and mage, and you also get a pet right from the start. I chose a rogue and a mean black dog, and off we went on our first adventure. Soon I found out that my pet wasn’t just a cosmetic addition; it would fight alongside me, become happy or sad, and require food, which is bought with in-game currency.

But it wasn’t just me and little Amethyst against the world: Arcane Legends is a Massively Multiplayer Role Playing Game (MMORPG), meaning that you cross paths with plenty of other players along the way. Some players breeze through and leave you behind, others like teamwork and might even ask to form a party with you or join your friend list. I remember doing this frequently in Pocket Legends; some of the dungeons were too dangerous to go solo, and it was good to have a sturdy list of “friends” you could call upon to aid you before venturing in.

There is a story of sorts behind all the fighting, but it never caught my attention, and there are so many quests–varied, weird, and confusing–that you lose sight of what you were supposed to be doing very quickly. Ultimately, I think my experience with the previous game is what kind of ruined Arcane Legends for me; it brings nothing new that is exciting enough to keep me interested.

As far as its free-to-play element goes, it works acceptably well. Purchase of premium items is not necessary for advancement, but it does get kind of boring to see all these offers you’re not interested in. Like, yes, medievally-dressed-lady, I would love to get a house for my character, but this is actually more expensive than the Hearthstone expansion for Skyrim, so I think I’ll pass.

Okay, so, back to the app store. This time it was clear that I needed something different, something that would definitely capture my attention. Enter Nonstop Knight. The game is advertised as “Playable with one thumb, designed to instantly pick up,” which sounded interesting, plus the color scheme really caught my eye. I had found my next pick. 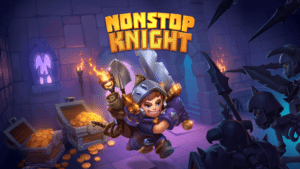 If you’ve been reading my pieces, you know I’m a fan of good tutorials. Nonstop Knight keeps its promise of being easy to pick up; it successfully walks you through the essentials of the game within the first minute, and before you know it you’re stuck to the screen mindlessly smashing skeletons.

Or, well, at least that’s what happened to me. See, the knight is actually nonstop. There is no wandering around, no villager who needs a rare herb, nothing of the sort. The knight will run in a very no-nonsense path along endless dungeons, killing every monster with relative ease. Your job is to press the ability buttons and upgrade your equipment as often as possible, to make your knight more badass and advance through the dungeons ever faster.

One of the things NSK has in its favor is that it looks incredibly polished. Kudos to that production team. The art is cohesive, the colors are well-coordinated, and the game in general simply works. In addition, its monetization model isn’t intrusive; you can get the full experience of the game without shelling out a dime. Most of all, NSK is fun. I inadvertently spent a couple of hours playing it, when I had only intended to quickly check it out.

Now, I’m not sure whether or not this game counts as an RPG, since there is not much going on besides fighting, no character creation, no story to speak of, and no quests (unless you consider the whole game as one huge quest). But I will say a hesitant yes, because you get to decide on your character’s abilities and upgrade gear as you go along, which is an important part of role playing. Let me know what you think of this matter when you try the game for yourself!

I still wanted something more, a game that could keep me entertained for hours, immersed in an old-school RPG storyline. Thus my quest continued. I noticed there was a saga of games called Dungeon Hunter by Gameloft that I had never paid attention to. The app rating was high and the screenshots looked good enough, so, without further investigation, I downloaded Dungeon Hunter 4. A little further investigation might have been good, since I later found out there was a fifth installment of the game already released. Oops. 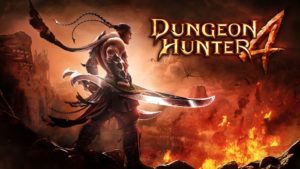 The first thing I noticed about this RPG is that it’s not lacking in storyline; Dungeon Hunter 4 begins with an intro sequence that briefly explains the conflict in the world you’re about to enter. Character creation is simple, and I made it even simpler by choosing my class on the sole basis of armor cleavage. I want this girl to live, you see, so I’m not choosing the ones with an enormous death window on her chest. Anyways, off you go into the world, and your first job is to survive and help others in the midst of what is obviously a lost battle.

In general, this game is the most similar I’ve found so far to the kind of RPGs I would play if my laptop hadn’t abandoned me. The art and graphics are impressive for a mobile game, and so is the narrative. I noticed the setting is a bit similar to Dragon Age Origins. There are demons roaming the world, killing innocents in droves and corrupting soldiers, mages, and peasants alike. I won’t tell you how the story ends, though, because that would be a spoiler, and also because I’m stuck on level 7.

See, some levels are intended to be played in co-op mode, which requires you to invite your friends to play with you. While in Arcane Legends there are almost always a few strangers helping you out (whether or not they actually intend to), in DH4 you are on your own unless your friends jump in by connecting through Facebook or a Gameloft account. It is possible to solo these levels, in theory, but it takes some gearing and leveling up before you can take them on.

Something I really liked about this game was the possibility to craft, charm and upgrade armor and weapons. Even if you’re not lucky enough to loot the best gear around, a few upgrades and charms will do the trick. Inventory space is ridiculously small for an RPG, so curate it well, or spend real-world money in gems that will help you expand it.

I still intend to keep looking at more mobile games, and, of course, to bring a shiny new PC into my life as soon as possible. I’m not sure if mobile gaming can actually replace PC or console gaming for someone who is already used to it, but I have to admit the quality and production value of the games I’ve seen is impressive, which bodes well for the whole industry, and for everyone who likes to roleplay.