If resolutions are supposed to be about bettering ourselves, the WWAC games section’s resolutions are about finishing our long-standing obligations, making our own games, and finally tackling our ever-growing to-play lists with verve and vigor. Some of our contributors shared their resolutions for the coming year, and maybe they’ll inspire you to game harder in 2017. 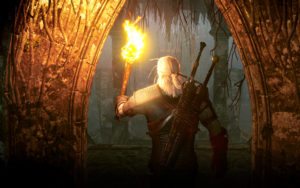 Wendy Browne: I’ve neglected Geralt of Rivia for too long. This year, I promise to finally get around to playing The Witcher 3 and reading more of the books the game is based on. Now that I’ve finished up with my Smuggler, I also plan to dig into the Star Wars: The Old Republic chapters that I need to catch up on. There will be more arcade brawling in Overwatch. I’m hoping that my friends and I can return to our Dungeons & Dragons campaigns. And I want to play some of those indie games that have been sitting on my Steam Wall of Shame.

My resolution is to accomplish all of this before Mass Effect Andromeda takes over my soul in the spring.

Clara Mae: I really want to explore the Steam store more, and try as many new mobile games as I can! I’ve accepted that I can’t lug over my consoles and a TV into my new apartment, so I really want to look more into indie games and anything I can get my hands on for Mac and iPhone. In particular, I’d love to find more hidden gems with female protagonists. Also, try more Telltale Games! Over the holidays I downloaded Telltale’s Tales from the Borderlands and Game of Thrones. A year ago I had little interest in either, since I’ve already played the main Borderlands games and seen the Game of Thrones show, but now I’m really curious to see what they have in store.

Melissa Brinks: When your friends live as far apart as mine do, especially when they have varied schedules, completing a Dungeons & Dragons campaign is a far-off wish. We’ve been slowly working our way through “The Lost Mine of Phandelver,” which is included with the 5E starter kit, for far longer than I’m willing to mention publicly.

After spending a generous amount of time with the rules as well as an obsession with Friends at the Table and The Adventure Zone, I’ve decided that it’s time to expand our game with some original material, except that’s hard and time consuming. I love being a GM, but it’s a large time investment and when it comes to the end of the day, I usually want to play games, not write them.

And I know I’ll have a blast when I get started. I have a setting, characters, a general arc, even an overarching theme. So for 2017, I vow to not only start, but finish, at least half of my own campaign, no matter how many hours of Overwatch I have to sacrifice to do it.

Sergio Alexis: 2017 is going to be big for me and gaming (I hope). I really want to get a new console this year, be that the upcoming Switch or a Playstation 4 now that they will be way cheaper. There are a lot of games I want to play on PlayStation 4, and, as a massive fan of the 3DS, the Switch is going to be one to watch. I’m also really hoping to get into tabletop; I made a group of players online but we haven’t got around to actually playing. We are an all queer group and we are going to play monsters getting a half-monster princess on the throne.

I’ve loved the idea of working on games since I was a kid, and this year I really want to make some of that stuff come true. I am designing a card game to tie into a card game comic I am writing, and I hope by the end of the year I have it finalized. I want to write a dating sim game with a couple of friends this year, too. Looks like it’s going to be a fun three-girl job, and I’m really excited by the things we have planned. I hope to have a script for the girls you can date by the summer, so we can have a game really in the works, even if I have to go in and do more editing after.

Soco Cinconegui: Even though last year brought some great games into the picture, it was not a particularly good year for me as a gamer. There was the sad fact that my laptop was unable to run the latest games, and the even sadder one that I was generally too busy to spend as much time gaming as I would have liked. But 2017 is looking entirely different. Since I’m not a full-time student anymore, I will have a lot more time to devote to gaming. That’s a great thing, because there are so many games in my libraries that I’ve barely touched, and I need to get to them before Mass Effect: Andromeda consumes my whole existence. There will be a lot of inter-species smooching this year. Oh, and also pathfinding, I suppose!

It will also be a huge year for me as a budding game developer: I’m attending GDC in February thanks to a scholarship awarded by FundAV. I hope this trip will give me all the motivation, tools and inspiration I will need to fulfill another kind of gaming resolution: to finish and publish as many more games as I can, and to write more often, better, and more insightfully about the art medium that has become my life.

Share your gaming resolutions with us in the comments below!