Get Your Game On Wednesday: Gaming Quickly

This upcoming year of games has me pretty excited, and contemplating saving up for a PS4. I’ve been making my way through all the Mass Effect games in anticipation for Andromeda, but there’s more news than just WWAC’s Bioware love. 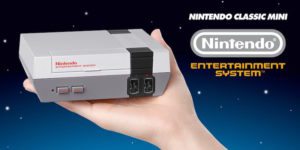 The NES Classic Edition launched in November 2016 and hit the nostalgia sweet spot. This $60 USD piece of hardware comes with 30 classic Nintendo games, is a quarter of the size of the original console, plugs in through an HDMI cable, and is powered by USB. However, some fans felt that 30 games wasn’t enough and hacked the system to add even more options, including some homemade games. The alterations to the console’s coding is not for scripting beginners, but can be found translated from the Russian on Reddit.

This past Sunday saw the launch of the annual gaming speedrun, live-streamed marathon “Awesome Games Done Quick,” a charity drive for the Prevent Cancer Foundation. While a live-audience can enjoy the spectacle this week in Virginia, the event can also be watched at from the comfort of your home, and you can catch up on the previous days’ activities (like Zelda: Ocarina of Time and Super Mario Kart) on their YouTube channel.

Other News for You: