This year has seen the release of some incredible games. Incredible in every sense–we’ve seen games we never thought would come out (The Last Guardian, Final Fantasy XV), games that we never expected to love so much (Overwatch), and games that probably could have benefited from a little more time in the oven (No Man’s Sky).

We’ve shared some of our favorites with you over the course of the year, but when it comes to our top games for 2016, there are some clear winners.

Overwatch made a lasting cultural impact, not only because of its beginner-friendly environment and positive in-game chat, but its characters who spawned fanart and ships galore. This year wouldn’t be the same without Pharmercy, McHanzo, Widowtracer, and Reaper76 being a common sight on our Twitter and Tumblr timelines. Many of us know friends who became first time gamers through the joy of a 6-minute battle playing as Tracer, Mei, or other favorite characters.

Overwatch‘s mechanics are simple: Clear mission objectives, fast-paced gameplay that doesn’t bore, and no confusing button combos. In addition to the fandom that has taken a life of its own, Blizzard keeps things fresh by introducing new brawls and battle modes on a regular basis. Loot boxes and special event skins (including Olympics, Halloween, and holiday) also keep us coming back for more. For pure enjoyment that isn’t tied to a larger franchise, a horror or mature plotline, or grinding levels (all of Overwatch‘s characters and abilities are immediately available), Overwatch delivers. Check out more of our reactions to Overwatch in our roundtable!

Firewatch was one of those games I knew I was going to love. One of the most interesting things about games for me is their unique potential for storytelling, not just in the branching narrative sense, but in how interaction and expectations drive how we experience the story. And story is where Firewatch excels.

Sure, the visuals are gorgeous, and the cartoony style gives the game a pretty unique look. But when I think back on the experience of playing Firewatch, I think of the feelings of isolation and loneliness, of running away, of two-dimensional communication. While the ending drew some heat for being a letdown, I think it’s perfect. We’ve come to expect a certain feeling from the denouement of video games, and this one subverts it neatly and deliberately. When we feel that crushing realization that we’re not the hero and we won’t ever be, it’s like a slap in the face. But looking back at the narrative, of course Henry assumed he’d be the hero. Of course he thought he’d be the one to save the day. But he isn’t, and the unseen conclusion is him having to deal with all the choices he’s made that have left him with nothing.

It’s kind of a downer, but it’s exciting, too. Few games have left me feeling so hollow and so challenged all at once. Not every game will push your buttons like this, but I’m sure glad that Firewatch did.

Til Morning’s Light was a horror adventure mobile game I downloaded on a complete whim. It had a female protagonist, it was on sale, and anybody who games on their phone knows it’s just slim pickings all around when it comes to anything story driven. I wasn’t expecting much from Til Morning’s Light, but this little game ended up having a compelling story, cute, clean graphics, and strong gameplay that kept me hooked for the ten or so hours it took me to complete it.

The premise of the game is simple and Disney-esque. Two mean girls prank their friend, Erica, by locking her into a haunted house. Erica is rightfully terrified at the ghouls and monsters roaming the house, but she quickly overcomes her fear to become a Lara Croft-Buffy prototype. Erica is a witty protagonist and it was genuinely fun to watch her grow and become fearless. She deals with several male characters throughout, and it’s refreshing to watch her rebuff, refuse, and outright threaten some of them. This is a protagonist who knows what she needs to do and won’t let anybody get in her way.

The gameplay is also excellent. It’s a mixture of puzzle solving and monster slaying. You learn to do a variety of timed attacks, and Erica figures out how to upgrade her weapons from a simple pipe to a supernatural sword. Erica is just seriously a great protagonist, and I wish more games featured teen characters like her.

Stardew Valley is a farming game, famously a clone of Harvest Moon. I had tried HM before, and even though I loved its premise, I didn’t have the patience for many aspects of the game. Stardew Valley gets these things right, and adds beautiful music and pixel art, great characters and an interesting storyline.

I cannot even tell you how many hours I’ve spent playing this game; I’ve had to deliberately take breaks from it for months in order to, you know, get on with my life. It would be difficult for me to point out my favorite aspect of the game; what I like about Stardew Valley is the whole experience of a day-to-day life that I can build in any way I like. I can spend my days farming, hiking, fishing, mining, fighting, or making friends. Or simply hanging around in my farm landscaping, building, and looking at my giant melons.

It is very rewarding to see your farm blossom after a few seasons of hard work, to witness the growth of the different characters in town after they receive the gift of your friendship. Even after the two years the game stipulates as “end game,” there is still plenty to do in Pelican Town, and if you do not fancy starting over (which is always tempting for me), you can continue to play with your farm indefinitely. With the latest update, you can rearrange your farm buildings as many times as you like, complete a new line of quests, and even divorce your spouse and pursue someone else. As you might imagine, I will still be playing Stardew Valley long after 2016 is finally over–and I hope you try it out, if you haven’t already. 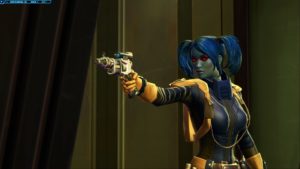 I’ve played a lot of different games this year. Some old, some new. I explored World of Warcraft for the sake of checking it off of my gaming bucket list, I replayed Valkyria Chronicles on PC, because I hate strategy games, but love that one so much. I played everything Telltale Games had to offer, because it’s Telltale Games. And I indulged in the wonderful community that Blizzard has fostered through Overwatch. But the game I keep coming back to is Star Wars: The Old Republic.

I am dragging my feet on completing my Smuggler’s story, because Correlia is such a horrible planet to traverse, but I intend to tough it out before the year is through. I had big plans to complete all of my characters’ stories, but, with Imperial Agent, Trooper, Jedi Counselor, and soon, Smuggler under my belt, I’ve come to accept that this is just too big a commitment to make, especially when other games like The Witcher 3 have suffered from my neglect, and with Mass Effect Andromeda on the way, I simply won’t have eyes for anything else. But that doesn’t mean I’m giving up on SWTOR as soon as Captain Eraah makes her last shady deal. BioWare has been consistently making improvements upon the game since its shaky launch, and the latest expansions have breathed much life into the MMO. I’m still far behind on those stories, but the joy of this MMO is that it’s always there for me to go back to whenever I need a Star Wars fix. Plus, my daughter has started playing, which means I can relive some of my favourite moments through her.