Get Your Game on Wednesday: Girls Make Games but Nobody Gets Full-Time Employment

Welcome to Wednesday, gaming warriors. It’s officially the holiday season, and that means we’re either swimming in new titles to play or anxiously awaiting the moment when we get to open the title we know we’re getting, but have to wait for. If you’ve been staring idly at your wrapped presents and missed this week’s news, no worries—I’ve got it covered.

At least one thing is going right in the White House—Girls Make Games, a organization dedicated to teaching young girls to code and create their own games, recently held one of their workshops there. The workshop included 20 girls between 11 and 14, and each student walked away with a completed prototype of their game, a bunch of resources, chocolate, and the confidence to know they could make their own game. The workshop was part of Computer Science Education Week at the White House, which happens every year to promote education in coding, game design, and other aspects of the technology field.

Ever wanted to travel the Mushroom Kingdom at your leisure? Well, Nintendo’s working on it. The company announced a partnership with Universal Studios to build the first Nintendo theme park in Japan by 2020, just in time for the Summer Olympics. We can expect rides, costumed characters, and other standard theme park features, though the specifics are still scarce at the moment. 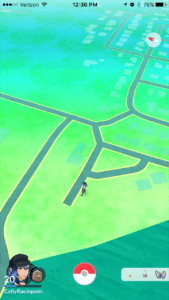 The rural wastelands of Pokemon GO.

As part of the company’s movement to diversify its income sources, Nintendo also released their first mobile game, Super Mario Run, to mixed reception, especially on the App Store. Users are citing the game’s paywall as an annoyance because the game is listed as free, furthering the conversation about free-to-play versus pay-to-win games.

This isn’t the end for Nintendo’s mobile market, either. All six classic-era Mega Man games will be hitting smartphones next year…in Japan. No word yet on when or if they’ll come to other areas, so for now we’ll just have to star jealously in Japan’s general direction.

While it’s only tangentially Nintendo, Pokemon GO just launched a big update this week—baby pokemon! While it’s probably not enough to draw back the game’s thinning player base, especially given the dismal state for more rural players like yours truly, it’s a pretty neat update for those still catching ‘em all.

It’s been a big week for esports with an enormous update to DotA 2, Valve’s hit MOBA. The update, which clocks in at over six megabytes in size, features a new hero, a UI update, and a variety of other features to liven up the three-year-old game.

League of Legends also made headlines this week by scoring an enormous deal with BAMTech, an MLB spinoff streaming brand set to launch its own app as part of the deal. With $300 million going to Riot Games and seven-year exclusivity for BAMTech, that’s a good deal for all involved.

It’s not a news update without Overwatch, so here’s what’s been happening in everybody’s favorite shoot-’em-up.

The holiday patch dropped, which means a new brawl, in which players, as Mei, shoot each other with snowballs in a one-hit-and-you’re-done style similar to the newly launched 3v3 and 1v1 modes. The patch also included a bunch of new skins, emotes, and similar cosmetic items, as well as the long-awaited Symmetra buff.

Unfortunately, not all of the holiday gear has been a hit. Fans have complained that Mei’s holiday costume is a mere recolor of her regular outfit with the addition of a Santa hat, and therefore not worth the legendary ranking and subsequent price hike. Blizzard responded with an acknowledgement that what they think is cool may not reflect the objective coolness of the skin, though they did say that the Ice Block changes—in the winter skin, Mei’s Ice Block ability turns her into a snowman—were what made them rank it as legendary.

Also among the holiday updates was a new emote for Widowmaker, in which it appears that she’ll kiss the viewer, only to…not do that, of course, because this is Widowmaker. Fan responses varied but were, shall we say, vocal, regardless of position.

And lastly, fans sent Blizzard a bunch of cookies. Why? Why not!

This Polygon piece on the game industry’s reliance on contractors to cut costs is essential reading.

If you’re hankering for more Final Fantasy XV, not to worry—it’s getting a New Game + mode for all you hardcore types.

The Ezio Collection remaster of Assassin’s Creed 2 earned some attention for some, um, odd animations and faces. Sadly, it appears they’ll be patched out soon. You’ll live forever in our nightmares, random Italian dude.

To celebrate the successful backwards compatibility of over 300 Xbox 360 games, Microsoft is providing free downloads of beloved JRPG Lost Odyssey. Get yours before December 31st!

Good news for all you PC gamers who prefer PlayStation controls—the Dualshock controller is now supported by Steam. About time.

Publishers—of the print variety—are getting into the game publishing game. Crossword puzzles and the like are a standard of newspapers, and games could be an exciting new way to discuss and spread the day’s news.

The games as art debate rages ever on and on. Shigeru Miyamoto, creator of Mario and Zelda and other games that made your childhood, recently said that he thinks of himself as a designer, not an artist. Your mileage may vary, but the distinction is an interesting one.

Have a great week!