As a lifelong sucker for a buff girl in armor, Rose of Winter is about as far up my alley as it’s possible to get.

**Rose of Winter was developed in part by one of the WWAC team members, and the copy of this game was provided in exchange for an honest review.**

Rosemary, aspiring knight, is as adorable as they come. She’s on a mission to prove herself, escorting one of four princes across the treacherous Mount Needle with her huge sword, winning personality, and genuine caring. It’s a visual novel with all the romance you expect of the dating sim subgenre, without focusing too purely on relationships as a win state. 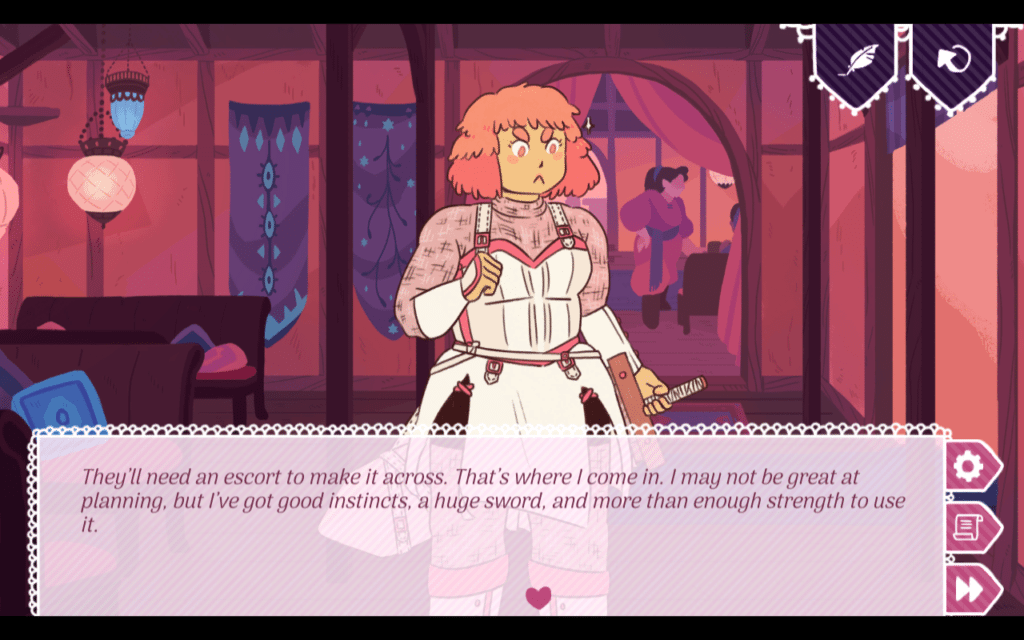 That’s Rose of Winter’s biggest strength—while romance is an important part of the game, you don’t win a prince’s affections through pure adoration. Prince Falker, prince of the Fae kingdom, is driven by duty as well as a healthy dose of vanity. Prince Elgandir and his caretaker, Crow, challenge Rosemary’s patience and skills with their behavior, while Tirune, a dragon prince, forces her to question her own strength. Kuya, Beast-Prince of the Moonforest, is arrogant and combative, but his actions conceal something much deeper inside.

Like most people, these princes can be hard to love. They’re flawed, just like Rosemary, driven both by the desire for companionship as well as their own goals. Winning their love, unlike in many dating sims, isn’t about selecting the ‘nice’ conversational options and raising your charm stat. You have to pay attention not just to what each character says, but also what they don’t say—that’s where the keys to unlocking each good ending are held. 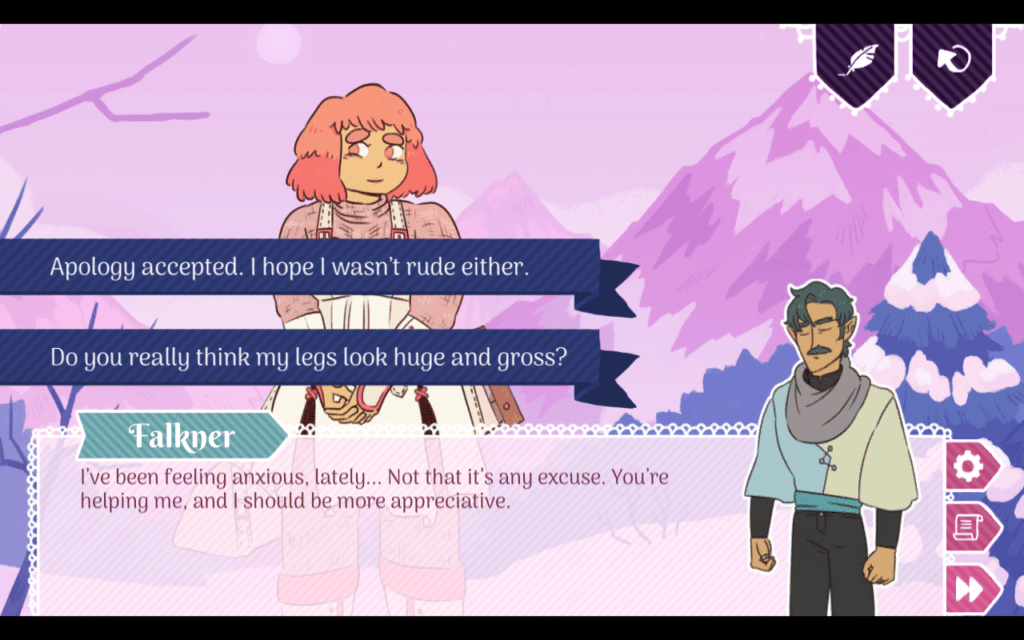 While I breezed through Crow, Tirune, and Kuya’s endings, Falkner was a struggle. Without exaggeration, it took me almost ten tries to figure out what it was exactly that he wanted from Rosemary; I flattered him, I chewed him out for disrespecting my plucky heroine, I saved him and let him save me, but I couldn’t find the right combination to make their relationship end in anything but a troubling goodbye. The reason? I wasn’t listening. I was shooting for the goal and the ‘unlock all four happy endings’ achievement, not actively trying to understand him as a character.

Players will undoubtedly come away from Rose of Winter with a favorite romance storyline, but each one is treated with depth and complications that make it challenging to “win.” And even when you do succeed, you’re not guaranteed a happy life of romance; these are princes, after all, and each character is not just waiting to fill the romantic gap in their life. A good ending is not necessarily happy, but, in Rose of Winter, it may still be an excellent exploration of human connection. 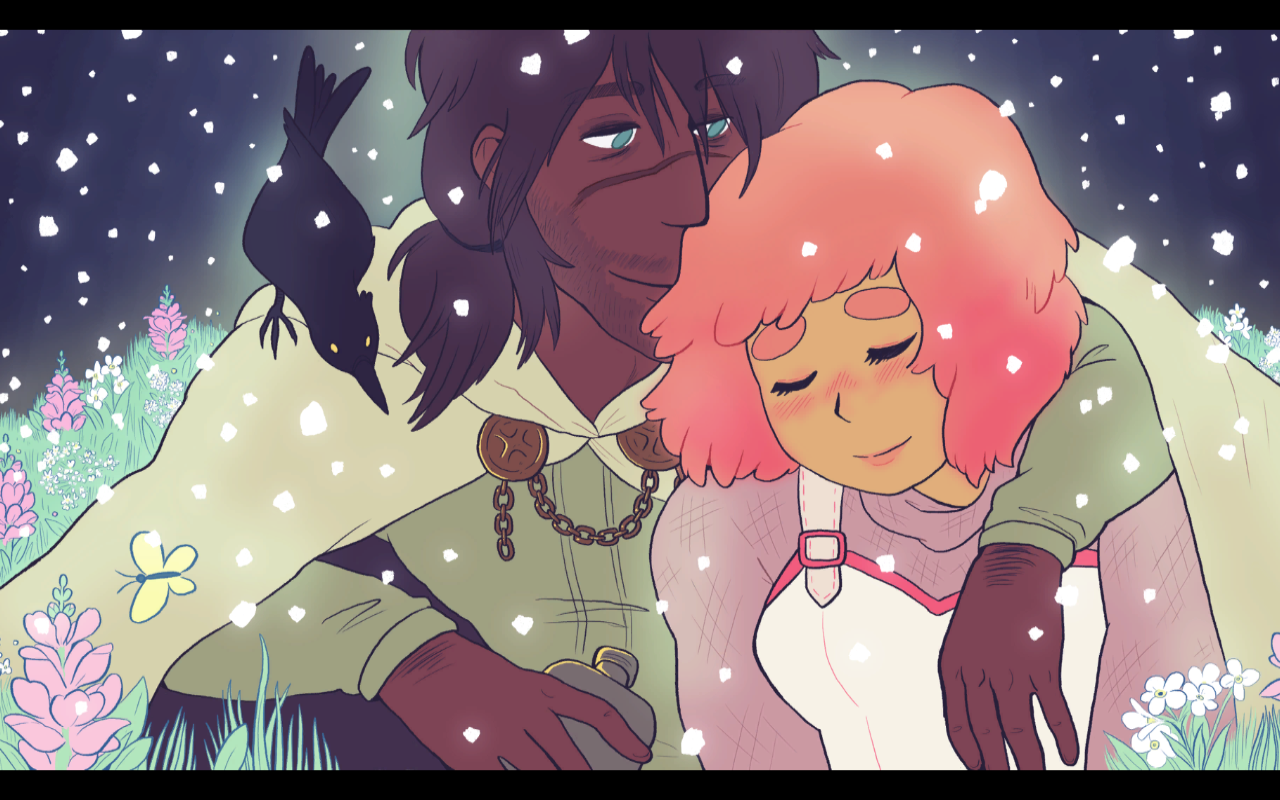 Portrayals of realistic relationships (despite the dragons and beast-princes) are not Rose of Winter’s only strength. Rosemary isn’t just adorable because of her characterization—the game’s art is a joy to look at, its color palettes perfectly suited to the light, airy tone with occasional hints of darkness and creepiness. Rosemary’s expressions are particularly great, her stalwart resolution and awkward blushing highlighting her emotions even when she isn’t willing to talk about them.

Rose of Winter is charming, smooth to play, and surprisingly challenging for a romance-focused visual novel. Don’t expect nothing but the warm fuzzies; you’ll get them, certainly, but this take on the genre is more nuanced and emotional than awarding you kisses just for picking nice dialog options. You have to try to empathize and connect, and that, coupled with its precious artwork and engaging characters, it what makes Rose of Winter such a success.