What We’re Playing Now: Fall Favorites for All Platforms

While many of us love to replay games we’ve played for years—Skyrim and Dragon Age: Inquisition, anyone?—we also love getting hooked on a game that’s a newer release or simply new to us. Here’s a quick roundup of games we’re playing right now and why we love them. Also check out past lists of games we enjoyed. 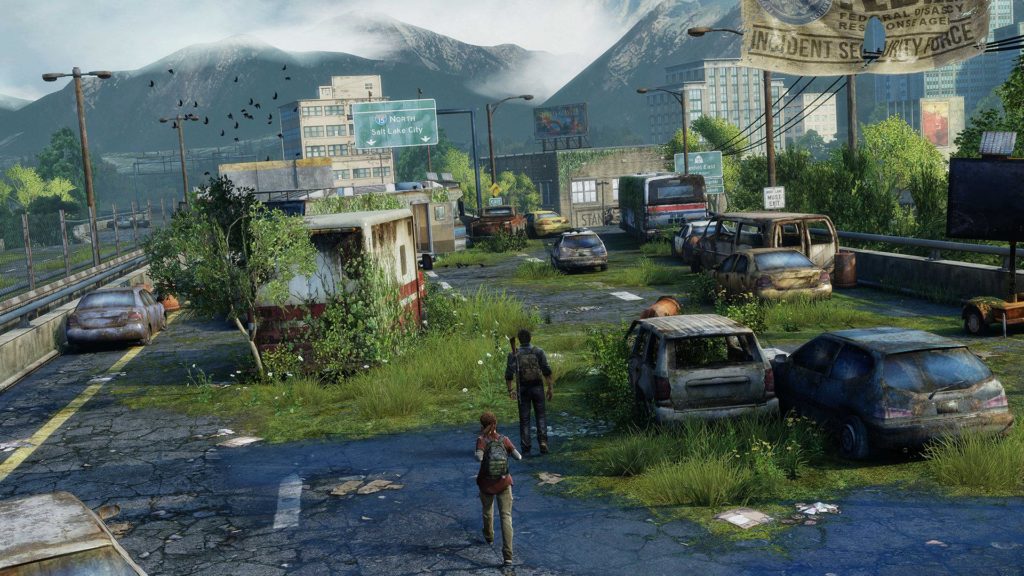 While there are many games in the zombie shooter genre, The Last of Us is peerless in its storytelling, immersion in a believable near-future urban environment reminiscent of the movie Children of Men, and simple yet enjoyable gameplay. While dialogue isn’t choice-based like a BioWare or Bethesda game, you quickly get emotionally invested in the outcomes of Ellie, Joel, and Tess. The game doesn’t put overemphasis on zombies or shooting: a lot of the game is walking through crumbling buildings and abandoned city streets, and more game time goes to exploration than combat. I like how the gameplay mechanics are simple, and tasks like crafting are frustration-free. The Last of Us also prompts a lot of thoughts about emotional survival after the loss of loved ones, and moving forward after your stability has been rocked. 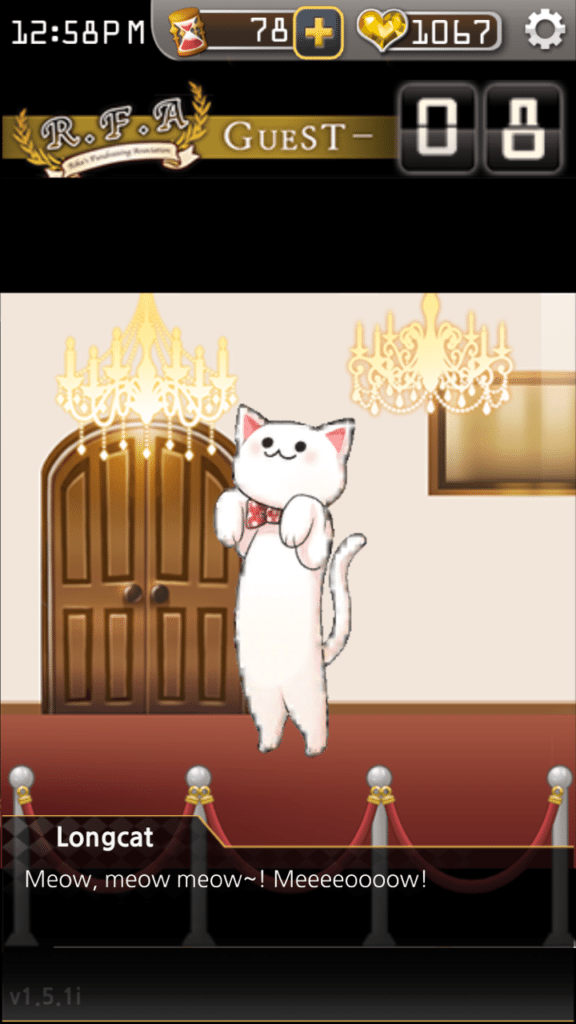 Mystic Messenger was not what I expected. I expected a cutesy dating sim told through text messages, which, while not untrue, is only part of the appeal. As part of a mysterious organization called RFA, you’re tasked with assembling a prestigious party based on the suggestions of the other members via email, text messages, and phone calls. It’s not difficult, but not simple, either; you have to pay attention to each whim and demand to succeed, not just in gathering partygoers, but romance options as well.

As of writing, I’ve only finished Yoosung’s route. Pursuing Yoosung was mostly an accident—I found him a little clingy and a bit too young for me, but watching him grow as a character was as rewarding as the moment your character and your love interest finally meet. Each character has a unique personality and backstory and I’m excited to replay the game to figure out what makes each character tick. Jaehee, you’re next. 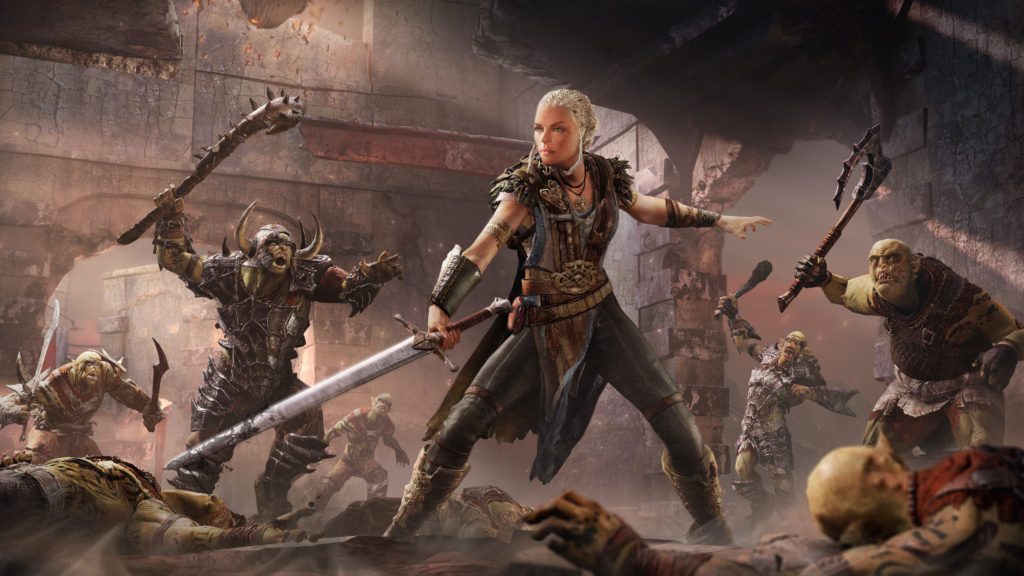 I bought Shadow of Mordor on a whim a few weeks ago, and I have to admit that it was a bit frustrating at the beginning. Any dim-witted Uruk seemed to be powerful enough to best me in combat—and what’s even worse, got a freaking promotion and increased in power after killing me. But after some time, once I got a hang of the stealth element of the game, I became able to take down whole camps without the orcs ever knowing what hit them. Literally.

With combat not being a problem anymore, I could finally focus on the story and enjoy being immersed in a very lore-friendly Middle-earth adventure. That’s when the game became actually dear to my heart: one of the protagonists of the game, whose identity is revealed after some main quests, turned out to be one of my favorite characters from the Tolkien books! I really want to know the rest of the story, so I will likely continue to smash Uruk brains in nerdy glee for the foreseeable future. Wish me luck! 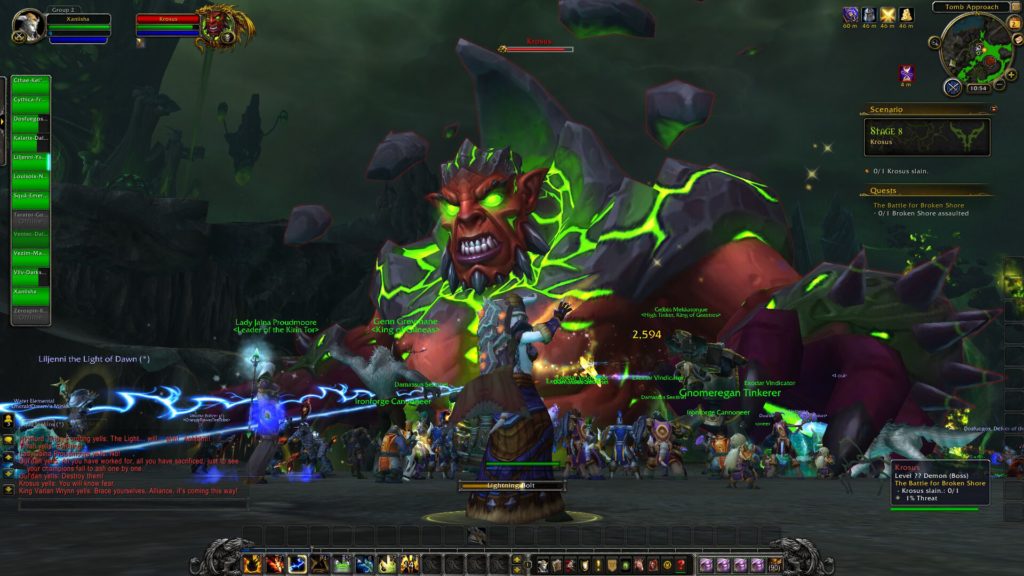 It’s only been, what? A decade since World of Warcraft was released? I figured it was about time I checked out the MMO that every subsequent MMO is invariably compared to at some point. I’m not wholly ignorant of the world that is Warcraft. I watched the movie. Just kidding. Well, I did watch the movie and even read the prequel book, but my knowledge base does expand into some of the actual lore behind the Horde and the Alliance’s struggles. And now there’s the whole new Burning Legion to battle! But first, I wanted to experience the game at its grind-y, fetch quest lowest, and took my draenei shaman and my troll hunter to level 30 before raising the former to level 100, and creating a new blood elf demon hunter. So far, my utter noob state has only been insulted once. 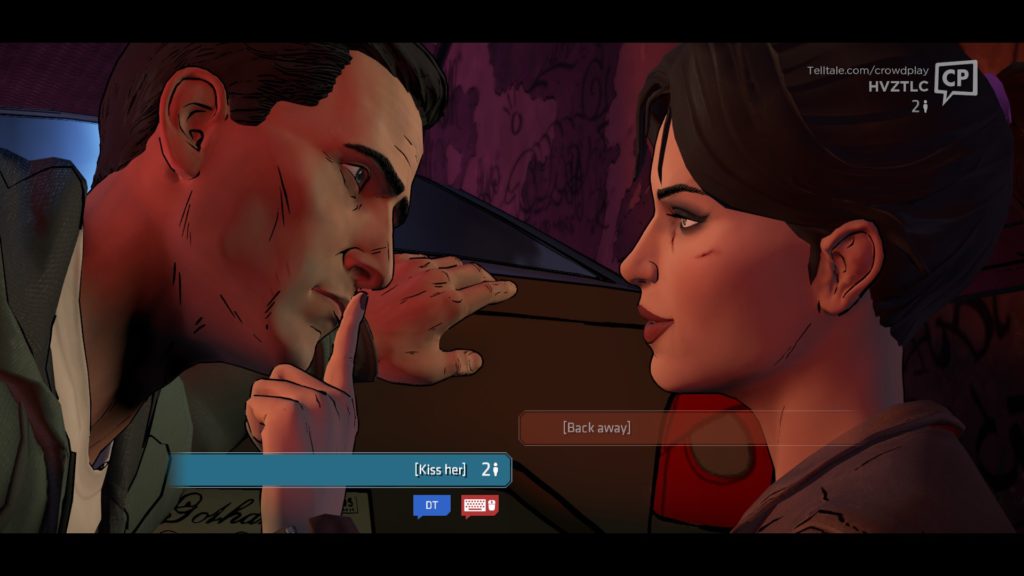 I’m rarely ever playing just one game. Along with WoW, my continued adventures in Star Wars: The Old Republic, Halloween brawling in Overwatch, and mostly not dying in Dungeons & Dragons, I’m going out on hot dates with Bruce Wayne and my bestest gaming friend via Telltale Games’ Batman crowdplay experience. We were initially annoyed to see that episode two continues the focus on the murder of Bruce Wayne’s parents. Because really? We haven’t seen enough of this? But as the story progresses, we’re discovering some nasty truths that make Telltale’s twist on the Bruce Wayne story a little bit unique. For the most part, my friend and I have similar thought processes when it comes to gaming so we’re letting trashy, white privilege Bruce shine through in our gaming choices. For the record, 84.4% of other players thought Bruce should totally kiss his good friend’s girlfriend, too, but Catwoman is having none of that. 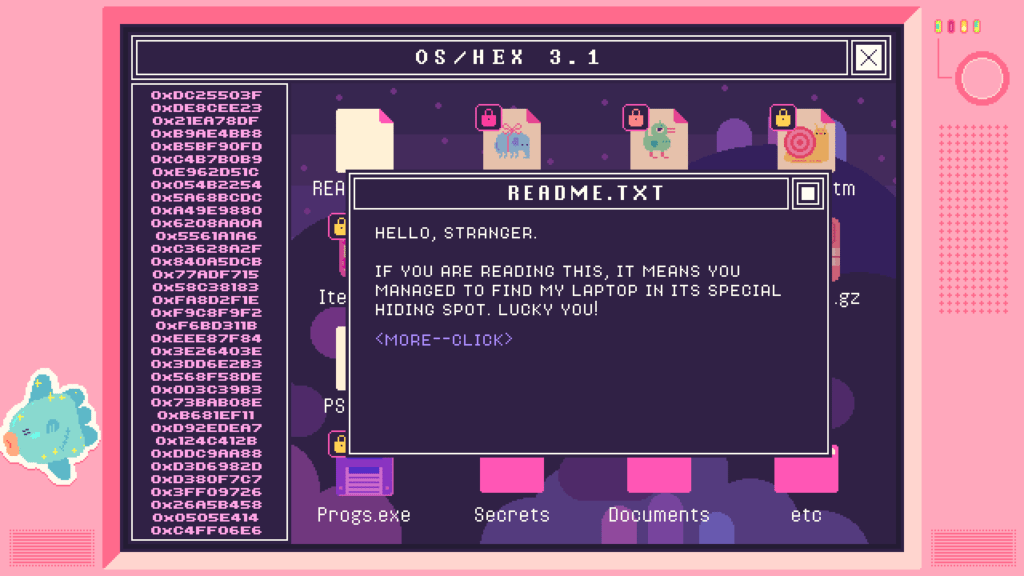 Help, I’ve been poisoned by Stardew Valley’s 1.1 update and Overwatch’s Halloween events again. But in between those, I’ve been enjoying a little puzzle game that released this month called Beglitched. You complete cute grid-based puzzles to do small chores for the glitch witch, a hacker whose computer you’ve adopted. Rendered beautifully with pink-themed pixel art, you can lose hours to this game, but I hit a bit of a difficulty wall. (Psst, if anyone can has tips for the cat level, please comment!) 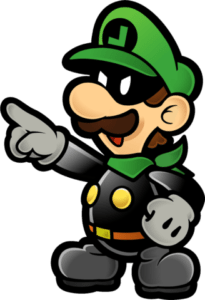 This is one I’m replaying, but it’s been so long since the first time that I barely remember it. I get a headache from the visuals of three-dimensional, multi-view games, and am largely confined to playing two-dimensional games, hence this replay. I also don’t like a lot of pressure during gameplay. Video game time is chill time, and the Paper Mario franchise suits my needs perfectly. There are puzzles to be solved, you get to play as Mario, Peach, and Bowser, and it’s cute as hell. Bonus: This game gets a little into the psychology of Luigi.

Elder Scrolls Online has been around since 2014, but with Update 12, they have changed the playing field. The previous big update, Tamriel Unlimited, released the game to consoles as well as removing the subscription model in lieu of Pay-to-Play (where you buy the game initially, but have no ongoing fees). It beckoned a lot of older players back who couldn’t justify the subscriptions long-term. Update 12: One Tamriel, however, has been more dividing. The aim of One Tamriel is to let players go where they want and play with who they want. This has been achieved by removing faction limitations and level restrictions.

This means that your level 1 Daggerfall Covenant character can now go adventuring with your Ebonheart Pact friend at level 30 in the Summerset Isles (Aldmeri Dominion turf). This means, however, that while your character and armor are still leveled, the enemies of the world are not—they are all, always, your level. This can prove to be a blessing if you previously found yourself blitzing through enemies and want a challenge. It can also be annoying if you were comfortable with the previous pace of things and now have to readjust or relearn how to play the game with its new balancing. 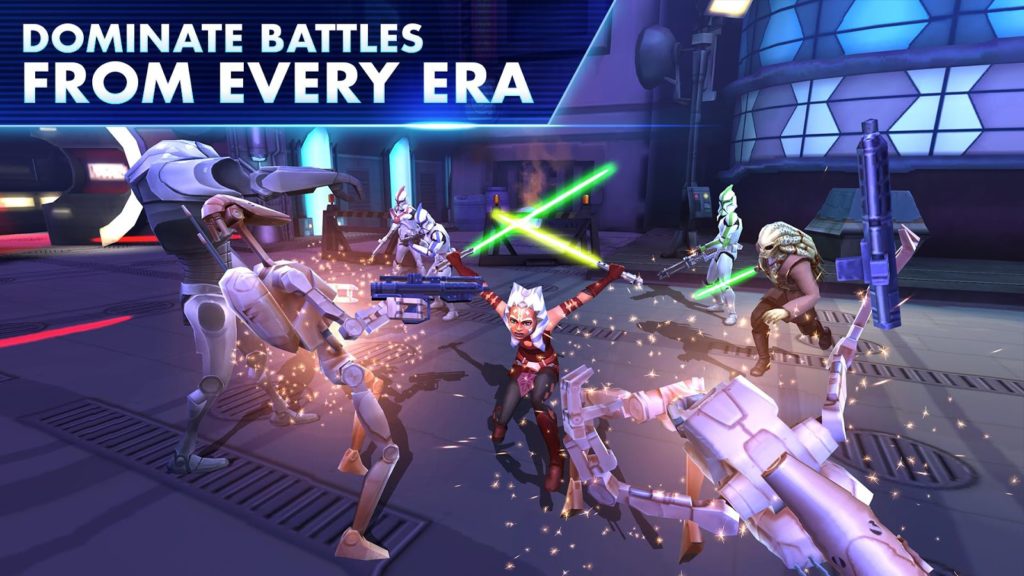 I’m surprised to say I’m now addicted to a Star Wars mobile game. I didn’t care for the Star Wars universe much until The Force Awakens came out, and this little game has successfully hooked me on the series. The gameplay is straightforward: you collect characters, level them up, and battle to win more characters and loot. But I love all the different battle arenas, as well as the option to join a guild and interact with your guild members. The people in my guild are genuinely nice people, and it’s always nice to see them encouraging each other and donating loot to the lower level folks. There’s also daily and weekly events that keep what normally would be a repetitive game way more interesting. 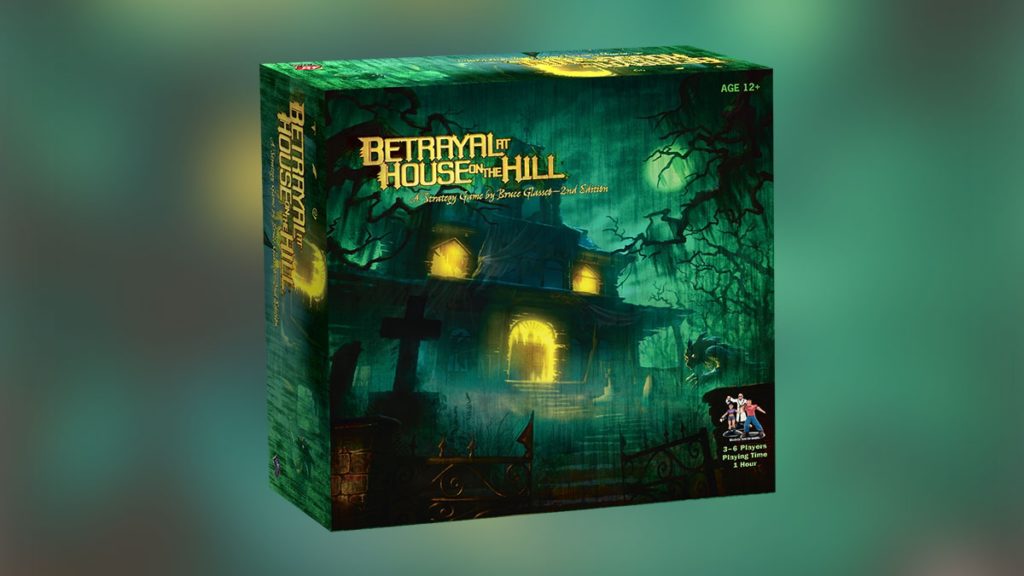 A perfect game for Halloween—slightly spooky and not too hard to understand! This game originally came out in 2004 with a new edition in 2010 and just last week a new expansion came out. You’re a group of adventurers exploring a haunted house, revealing creepy rooms one at a time. After each room is uncovered—more or less—you determine if the main “Haunt” is going to happen. Maybe someone will turn into a werewolf, or create Frankenstein’s monster, or there will be… aliens? It’s great fun and different every time. Plus, there are an equal amount of men and women characters to play as and it’s fairly short. It’s perfect for people unsure of tabletop games because it’s a quick setup for a lot of fun.