The United States Presidential Elections are looming like Big Brother. Sensing the country’s doom, the team over at GOP Arcade has presented the weary masses with The Voter Suppression Trail. In conjunction with that liberal news bastion, The New York Times, it’s a game for both excited and disenfranchised voters alike.

The Voter Suppression Trail is a rip off shout out to the beloved The Oregon Trail of our youth. Much more treacherous than crossing the vast wilderness with a couple of oxen is navigating this year’s polling stations. (Well, it can be more treacherous if you haven’t been properly caffeinated with your grande-mocha-latte-one-pump-2%-milk-extra-foam, thank you very much.) According to the creators, the game represents the “heroic journeys” of Americans, particularly the trials faced by “blacks, Latinos and pretty much anyone who brings the kind of diversity to our polling places that they have historically lacked.” 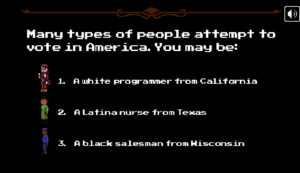 What The Voter Suppression Trail obviously is missing is a prominent white American male hero. How are are players supposed to win the war on voting if we don’t have a white male to point the way? Out of the three options to play, only one offers a white option: “A white programmer from California,” who looks more like Daria than Blackhat‘s Chris Hemsworth. Look, no self-respecting dude bro would carry a purple lady purse. 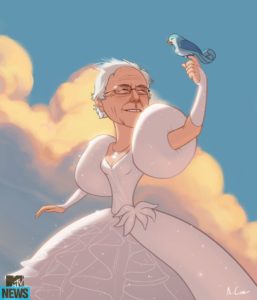 I was absolutely shocked that there exactly zero princesses to rescue. I had to put down my Red Bull so I wouldn’t spill it while shaking my head in disbelief. Sure, it’s a game about democracy and voting, but in America, we love our princesses. If there was a Disney princess meet-and-greet at each and every polling location, then odds are at least one would need saving. Am I right? Besides, ladies love princesses! Adding more princesses might attract more women to the polls. Wait, scratch that. No more women at the polls.  No one wants them to start infringing their crazy social justice ideas on our country. 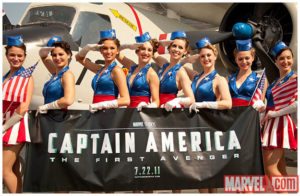 Nothing sells patriotism like eye candy for the male gaze. Iron Man/Tony Stark knows it, and even that goody two shoes Captain America/Steve Rogers does too. Apparently this game is caving to the SJWs because all three characters are not only fully clothed, they’re wearing clothes they might wear in real life! Sheesh, someone tell the creators that games aren’t real, and they don’t need to worry about pesky details like clothes for hot weather, cold weather or gravity. Show the players some skin! 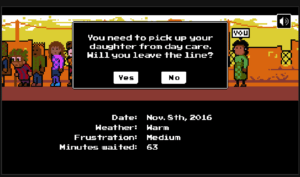 Finally, one area that respects the sanctity of a woman’s (versus a man’s) work!  The lame attempt at gender neutrality  slips up with the use of “Latina nurse.” (The pixelated avatar appears to be wearing a dress, thank goodness.) Additionally, the issues that she has while in line revolve around her children: being called for sick kids or crying kids. Don’t you dare bother the man of the house to help, Latina nurse!

Score: 1 out of 5 Armed Bad-Ass Eagles

Overall, although The Voter Suppression Trail reminds me of the joy of dying of dysentery on The Oregon Trail, all these teachable moments get in the way. Where are all the explosions and guns? Just think how much better it would it be if they had given at least one “election observer” a gun. Try to avoid me now, suspicious voter! Honestly what do I care if people, other than me, have to wait three hours or more to vote? It’s all rigged anyway. Right?