Goldilocksing the Cons: Which Gaming Con is for You?

With 2016 wrapping up, it’s already time to start planning which gaming conventions I want to attend in 2017. Not sure, how to choose the convention that’s right for you? Take a gander at my mini reviews from 2016 to help decide for yourself.

This 3-day gaming convention is not for the faint of heart. With tens of thousands of attendees, PAX can be tad overwhelming even for an extrovert. It is an immersive 24/7 gaming community weekend extravaganza. Almost everything that goes into the convention revolves around gaming. PAX East offers all you’d expect from a large-scale gaming convention- huge booths for upcoming triple A games, an expansive exhibitor floor, game celebrity panels, killer cosplay of game characters and more. The extras for a show this size are worth noting too — LAN gaming area, game art exhibits, old school arcade gaming and, of course, the community Dance Central and Rock Band stages. 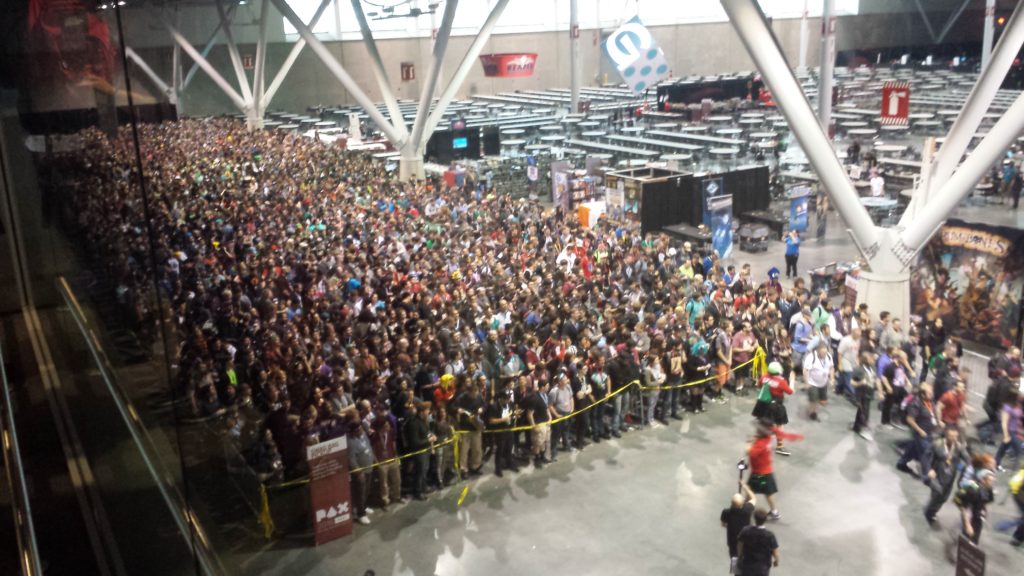 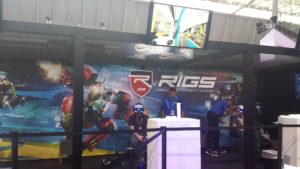 With the big game releases doing more and more open betas, the draw to wait in line for hours just to play becomes moot. In comes tech to the rescue! At PAX East 2015, it was the chance to test Alienware’s Steam Machine; at PAX East 2016, it was virtual reality (VR) all the way. The chance to try your hand at pricey tech before it hits the market is worth the hours-in-line wait for me. Of note was Rigs for PlayStation VR, an e-sports game where you play in giant mech suits. The VR for the suits and action was amazing! Being seated and without Dramamine did not help my motion sickness prone self not so amazing.

Another big draw is meeting celebrities in the gaming community. Similar to San Diego Comic Com which draws the big name geek celebrities, beloved Youtube and Twitch stars are becoming a staple of PAX East. Markiplier‘s meet-and-greet overflowed with fans who waited hours just to say hi and grab a quick photo. 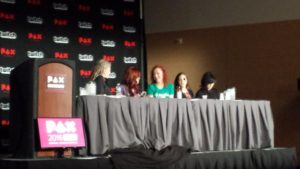 Downsides of a huge convention, and PAX East is no exception, is the sea of people on the exhibitor hall floor and long, long lines for popular games, panels and autographing events. Since the convention center is so vast, getting around can be challenging for those with limited walking capabilities. Each year, I’ve seen at least a few people in leg casts trying to navigate the expanse.

Lastly, although I applaud the efforts of the PAX East team to include diversity, the official Diversity Lounge leaves me with mixed feelings. I love to visit and always pick up a new shirt from the Geeks Out booth, but it reminds me how diversity is still an “other.” At a convention the size of PAX East, there are lots of sub-communities in gaming – LAN lovers, first-person shooter devotees, e-sports enthusiasts, to name a few, but the specific call out based on who you are, rather than what you love about gaming, rings a little sad for me.

One sentence review: If you want to eat/drink/sleep all things gaming and don’t mind navigating close proximity through a sea of strangers to do it, PAX East (or similarly large conventions) could be downright fun for you.

Another weekend-long event, the annual Origins Game Fair offers a different kind of gaming experience altogether. The event is focused on tabletop games only and the schedule mainly consists of pay-to-play events. Game events are hosted by a variety of different groups and each event has its own cost. 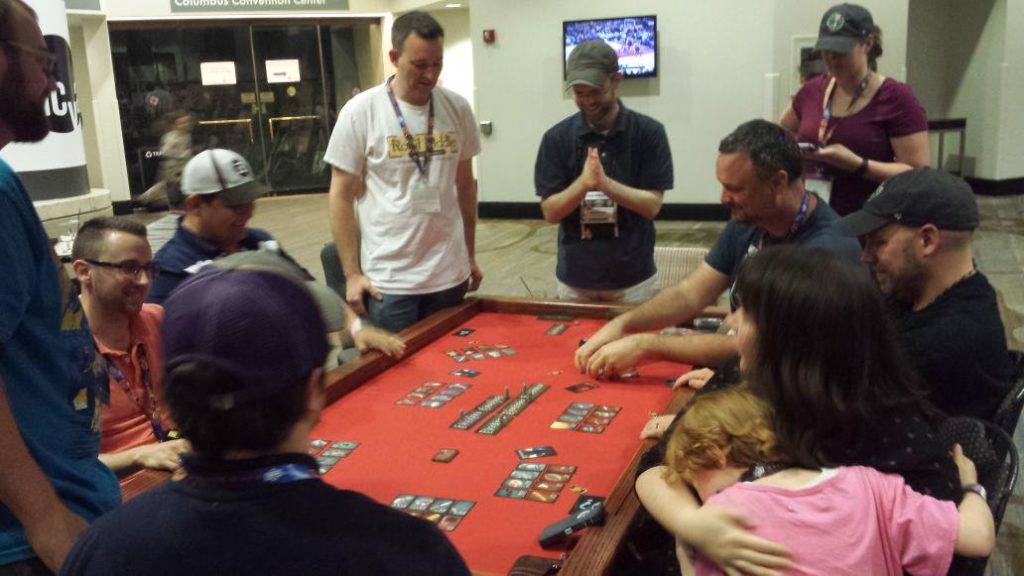 In pay-to-play’s favor is the fact that it helps keep the overall convention ticket cost down. Attendees can buy their ticket early, then save some money for pay-to-play events while at the convention. Another benefit is that you’re not roaming around looking for people to play a game you want to play or explain how to play a game you’ve never played before. So there’s no anxiety in trying to convince people to play a game with you. All you need to do is show up, try something new and have fun. 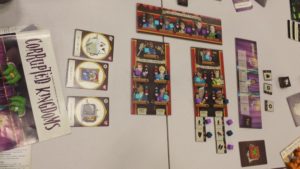 Being focused on relatively small community that is tabletop games, I found that many of the exhibitor booths were staffed with a mix of marketing folks and game designers. This helped me identify at least some diverse designers or talk to designers who were including diverse characters in their games. Of note at Origins this year, the extremely sex-positive card game, Furoticon, and publisher Artana who have not only focus on representation and inclusion, they have a policy for it.

If you’re going with friends or meeting friends from your online community, it can be a great place to play games together. I’m slowly building far away game friends and playing games in real life with folks I’ve met online is amazing! It never gets old for me.

Origins also reminded me that a great host city can play an important role in your convention. Columbus has excellent restaurants, a free downtown bus and a fabulous AirBnb rental. Taking place during PRIDE parade weekend was an added bonus.

It can be overwhelming for a new attendee to get the event listing book since it was over a half inch thick. If you’re a commitaphobe like me, adding a 4 hour game event to your weekend can be daunting. I like to wander more for my conventions than set a firm schedule.

Another downside to pay-to-play format was that there were limited free included-with-your-convention-ticket things to do.  Vendors did offer demos but even the access to the game library was an additional charge.

One sentence review: If you don’t want the hassle of finding people and figuring out how to play new-to-you games on your own, pay-to-play conventions like Origins could be your one true pairing.

If you’re looking for games outside the mainstream, an independent game convention can be the ticketA one-day celebration of independent video and tabletop games, Boston Festival of Indie Games (BFIG) is a much smaller version than the big weekend events but can be just as satisfying. 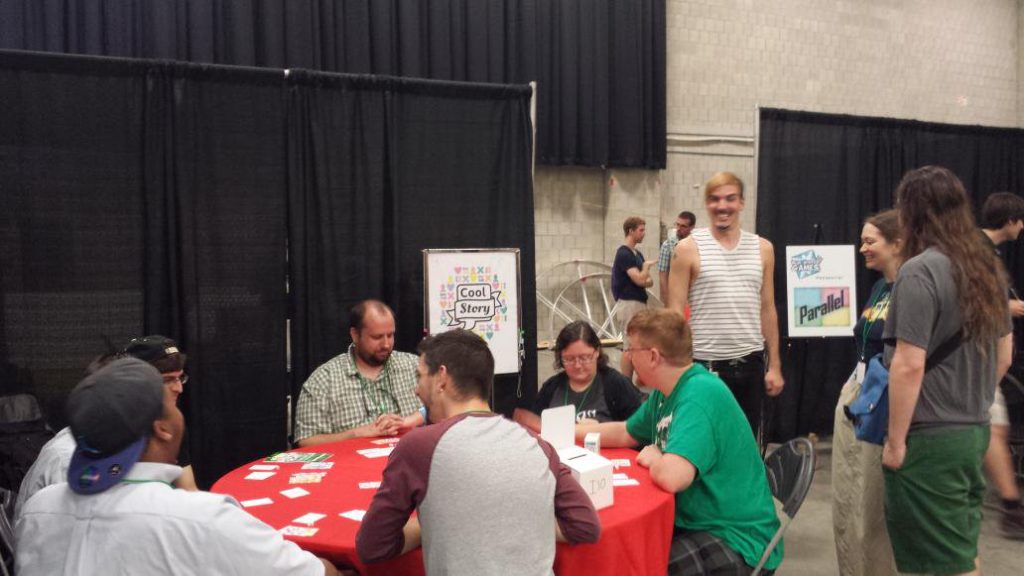 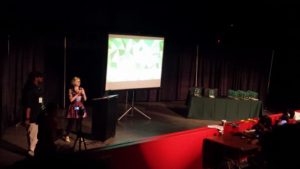 A big perk to indie events if that they’re often free or low-cost making it very budget friendly. Unlike larger conventions which have marketing folks staffing their game booths, at indie events you’ll see game designers and developers manning their booths. They’re usually looking for player feedback, so it’s a great chance to chat.

Indie events also focus on fostering community within the independent game space. Of note at BFIG 2016, the award presenters all work in the game industry. Their introductions gave attendees more insight about men, women and people of color working in games today. 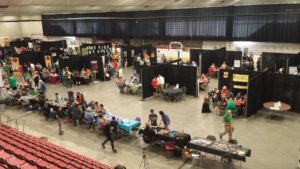 A downside of the indie scene, is that if you’re looking for completely polished, ready-for-market games, this is probably not your best choice. Often indie game festivals will also feature games in progress, though you may find some getting reading for a crowdfunding campaign or already available for sale.

One sentence review: If you need a budget-friendly way to find new games to play and want to meet the game designers and developers behind them, independent game events, like the Boston Festival of Indie games has your name written all over it.

Attending a gaming convention can be a ton of fun but it’s important to find an event you’re excited and comfortable going to. Do you have any gaming conventions you attend regularly and love? If so, let me know in the comments.