While many still consider mobile gaming as synonymous with Candy Crush and Angry Birds, the medium has really grown since then, accommodating games that used to only be possible on consoles and PC. Now mobile games are capable of delivering crisp graphics and complex stories while being relatively inexpensive. Especially exciting is that many of these games are coming out of indie creators who are telling stories from perspectives that are different than what we’re used to seeing in mainstream gaming. We’re starting to see more mobile game titles featuring diverse leads, and in particular, women and girls of color.

And because that’s just really awesome news, here are four games that you should check out right now that feature girls of color (all in their middle teens or younger). All of these girls have agency, aren’t objectified, and are all just really courageous and determined protagonists.

Broken Age is a point and click adventure game that focuses on two protagonists, Vella Tartine and Shay. While there’s two protagonists, Vella is the catalyst for everything. Vella is a teen Black girl who is chosen to be a ritual sacrifice to appease a monster called Mog Chothra. Instead of accepting the sacrifice as an honor, as all the townspeople tell her to, Vella rejects her fate and proclaims she’s going to slay Mog Chothra instead — a huge shock to her entire town of chefs and bakers. “We were once a village of warriors. We had pride and honor,” she says in a trailer. And so Vella strikes out on a mission and travels all over, from the clouds to the sea, trying to find a way to kill the monster.

The art is gorgeous and reminiscent of a children’s storybook. And while the story is appropriate for kids (probably ten and up), it’s also an incredibly complex and compelling one. Vella is a clever and thoughtful protagonist, and she’s absolutely the kind of character who deserves a spin-off. She’s also voiced by Masasa Moyo, who voiced Bumblebee in Young Justice! The game also features the voices of Elijah Wood, Jack Black, Cree Summer, and Jennifer Hale, the voice of female Shepard in Mass Effect.

Submerged is an exploration game set in post apocalyptic sunken metropolis, where plant life has taken over and people have returned to a simpler existence of hunting and gathering. The story focuses on Miku and her dying sibling Taku, who are described by the developers to be of Asian and/or Polynesian descent. Armed with only a rickety fishing boat and a determination to survive, Miku must explore the drowned city in search of medical supplies.

The game kind of has a similar look and feel to Tomb Raider or Uncharted but without any actual combat. There’s a lot of navigating in a boat, scaling walls, spotting markers, and finding treasures. The music is calming, and the graphics are incredible for a mobile game, on par with what you’d find in some console games. Submerged is not always an easy game — it can be sad and desolate at times, and I struggled with the mechanics of moving Miku — but it’s certainly an interesting and ambitious one.

By the creators of Guacamelee, Severed is an action-adventure game where you play as a one-armed Latina heroine named Sasha. You use finger swipes to hack and slash your way through a haunting, otherworldly landscape in search of Sasha’s family, who have all been kidnapped by a demon. Armed with a cursed sword and a bevy of special attacks, Sasha is a fierce and driven protagonist who doesn’t let any monster get in her way. There’s even a part of the game where it’s revealed the person who taught Sasha to fight so well was actually her mother, not her father, which seems like such a small detail but I love the message it sends.

The game is a beautiful blend of RPG upgrades, puzzle-solving, and mechanics reminiscent of Ōkami. The art is incredibly colorful and crisp and just really fun to look at and interact with. The gameplay in this one is very well-crafted, and it kept me addicted right until the end.

Never Alone is a puzzle-platformer game about Nuna, an Iñupiat (Alaskan Native) girl, and her arctic fox. Nuna is searching for a way to end the “eternal blizzard” that threatens everything she knows. The story is based on Indigenous folklore, and you move through the game with an Iñupiat narrator guiding your way. You’re able to switch between Nuna and her arctic fox, who’s able to call upon spirits to help Nuna traverse the harsh Arctic landscape.

Never Alone is clearly a labor of love of the Iñupiat community. Upper One Games is the first indigenous-owned commercial game company in the US, and Never Alone was created with the help of nearly 40 Alaska Native elders, storytellers, and community members. The gameplay and graphics alone in this game are beautiful, but what I especially love is that, at key points, the game will suggest you watch a supplemental video (in app) that helps provide more cultural context for what you’re seeing. Never Alone demonstrates perfectly how gameplay can go hand-in-hand — and even enhance — education. Like Broken Age, Never Alone is definitely children friendly and I would encourage everyone to check this one out. 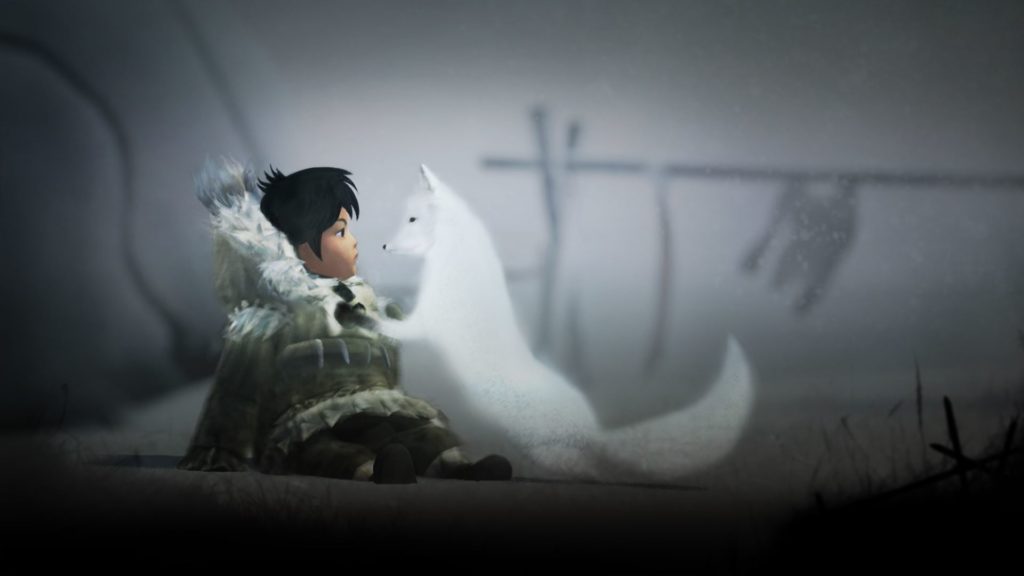 Nuna in Never Alone. © Upper One Games and E-Line Media