It’s October, and while many of us here at WWAC are thinking about witches, I’ve got zombies on the brain. Generally, I like zombies, and with Halloween coming up, it’s the perfect time to ponder the nature of humanity and confront our discomfort with the dead by thinking about zombies. 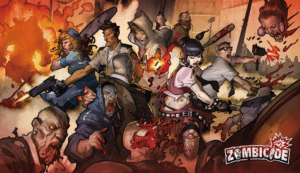 Zombie books are some of my favorite kind of horror. I’m too much of a weenie to really like horror movies, but I do like reading horror. So when I heard about Zombicide, a collaborative zombie game from Guillotine Games, I definitely wanted to play.

The game has a number of different versions called “seasons.” I played a recent season called “Black Plague,” which takes place in a generic medieval village. You get to pick from a cast of characters that includes the most badass nun, waitress, knight, and more. Each character has their own strengths. The badass battle nun that I played had extra stamina to eventually attack twice, while other characters acted like tanks and were able to take a lot of damage. 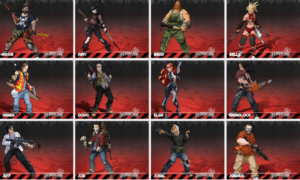 Generally, the point of the game is to complete the objectives in your scenario. There are multiple different scenarios that require different board set ups. The board comes with numbered pieces that you assemble according to the layout in your chosen scenario. Our scenario involved getting a couple of different keys, indicated by objective markers in various different buildings, and unlocking another building.

The difficult part is that the game moves in two different parts. First your characters move around the board attempting to loot rooms to look for better weapons or other helpful zombie-killing supplies. You can also kill zombies, of course, or give supplies to your other teammates or just run like hell. But after that it’s the zombies’ turn. Zombies spawn at predetermined points on the board and will also move during their turn. If you’re in a square where a zombie might end up–and characters can’t move during the zombie phase–you’re going to take damage. Zombies move toward the nearest character so some creative planning ahead has to happen so you don’t end up with a zombie gnawing on your leg.

Zombicide, like Pandemic, excels at making players legitimately stressed about the situation; it makes it easy for you to imagine how terrifying it would be to be trapped in a medieval town with handfuls, and then dozens of zombies, pouring in every minute. The more zombies that you kill means that your character level goes from “survivor” to “hunter” and beyond. As you progress in levels, more zombies get added to the game during each zombie phase. 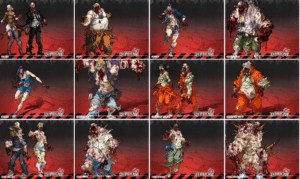 Even though it made me stressed–more and more zombies every round makes it seem impossible to win–I wish that it wasn’t so long. I played with a total of four people where some of us played two characters. Playing multiple characters gave us a chance to actually win versus the zombie hordes but it also made it take forever.

I appreciated the tension that the game created, but I wanted the game to present a bigger challenge than just ridiculous numbers of zombies. I realize that that may be the point but I was expecting a zombie boss or other type of twist to appear. When it didn’t I thought, Oh. It’s just more and more zombies until you’re totally demoralized and everyone dies. Yay?!

We did win our game, somehow beating back all the zombie and setting off a big zombie-killing bomb. My character died, so I was not very much help and was seriously tired by the end. We have been playing for almost four hours! That’s a lot of zombies.

If you like collaborative games and appreciate the potential reality of watching zombies swarm in front of you so you feel that real despair, Zombicide is for you. If you like zombies and collaborative games, but the thought of a four hour game scares you off, I don’t blame you one bit. I liked the game and want to play again if I can convince people to play an easier or shortened scenario.