Dark, Deliberate, Doomed: The Shadows that Run Alongside Our Car Review

You know that late-night confessional feeling, like when you spend too much time awake and start feeling the need to talk about things you wouldn’t otherwise discuss? You might be pulling an all-nighter with a study buddy or be twelve hours into a road trip, but soon enough, the secrets start spilling out.

The Shadows That Run Alongside Our Car

Lox Rain
Pay What You Want

The Shadows That Run Alongside Our Car is something like that. Developed in just four days, this visual novel follows Shelby and Dustin, whose names you can change, as they drive together to outrun the apocalypse. It’s a simple premise–trap two people in a car and see what develops–but the apocalyptic setting amps up the tension without overwhelming the characters that make it up. 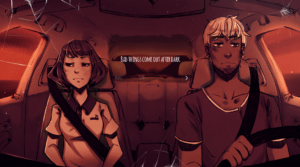 Much of The Shadows That Run Alongside Our Car is left ambiguous, but that lets the individual characters shine over the apocalyptic plot.

Because that’s what The Shadows That Run Alongside Our Car is really about: Characters. Visual novels fall into that subset of games that are often dismissed as somehow being lesser, despite the incredible degree of talent needed to craft a truly good one. Pretty pictures are not the only required feature; in addition to good visuals, you need characters, you need story, you need writing, or you’re missing the crucial “novel” component. Though this game’s story is simple, its emotions and its characters are complicated.

Shelby is a normal girl with a rough family life, and she’s keeping a secret from Dustin. Dustin is a bit of a mystery; he dodges questions about his work and covers discomfort up with self-deprecation and jokes. And The Shadows That Run Alongside our car never really answers the questions it presents, because it’s not about answers; it’s about creating a capsule of hope when everything else is fear and violence and uncertainty. The game begins after the action, and ends before it, a perfectly contained narrative that’s as much about what is said as what isn’t. 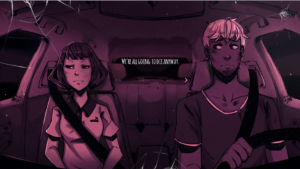 The game’s story is bleak, echoed by the gradual shift from warm, sunset orange to cool, dark blues and purples.

For a game developed so quickly, its polish is incredible. The art, done by Auro-Cyanide, lets the characters’ facial expressions shine against the detailed, but not overwhelming, backdrops. I kept finding myself looking at Shelby and Dustin’s faces, trying to find a greater clue about what secrets they were hiding. The colors, too, do wonderful things for the atmosphere; as time progresses, they shift from a warm orange to a cool blue, marking the sunset as well as the story’s final shift to darkness.

And The Shadows That Run Alongside Our Car is dark. With six endings, you’d expect the standard “good/neutral/bad” structure, with three for each character. While you could argue that that’s how the game functions, there is no objective “good” or “bad” here. It’s a bleak story, and it ends accordingly, but because you control the conversations, you determine if that ending comes with a hint of hope or quiet solemn despair.

It’s hard to write an impressive zombie story; they’ve become such a mainstay of gaming enemies and horror fiction that they’ve lost much of their meaning and scariness. And while The Shadows That Run Alongside Our Car isn’t quite the original zombie story I’ve been dying for since I first saw George Romero’s Dawn of the Dead, it’s a good one. Tropey though it might be, a zombie apocalypse is a powerful setting in the right hands, and, if the elegantly crafted characters, beautiful art and music, and sleek narrative structure are any indication, Lox Rain are definitely the right hands.