Legends of Callasia is a turn-based strategy game and the first one of its kind I have ever played. Although I do own a copy of TEG, my groups of friends and I have always gravitated towards role-playing game sessions instead. So when I downloaded Legends of Callasia’s demo, available on Steam, I wasn’t really sure if I would be any good at it, but I was excited to try it out. 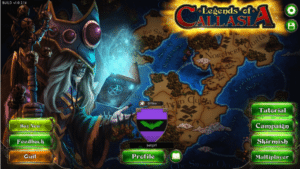 To my immediate relief, the game is very accessible from the start. One of my favorite features was the tutorial, which is a small campaign in itself and playable within a few minutes. It was very satisfactory to actually complete a level while learning how to play the game. After that stage I was ready to see what other maps I could conquer.

To start a game on either Campaign or Skirmish mode, you first have to choose a faction. Your options are: The Hundred Kingdoms (ostensibly good guys, led by a hunky knight,) The Faeborne (a host of fae and other magical creatures), and The Revenant (a menacing army of undead). I have played with them all, and I don’t see an obvious advantage to choosing any particular faction, but I will tell you The Revenant are a particularly stylish bunch, and, therefore, my favorites. 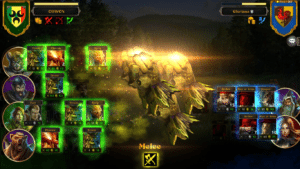 Gameplay is simple: during your turn, you choose which actions the leaders of your armies will take, which range from invasion, and the ensuing battles, to building towns and fortresses. If you want to, you may use some of the special cards you may have at your disposal, and once you end your turn, all the actions are executed and battles take place. 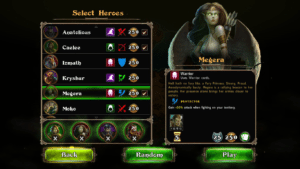 To be frank, I am not very interested in battle scenes like these where the player is simply a spectator. Thankfully, the game includes the possibility to skip them altogether and go straight to savor your victory—or lick your wounds. And don’t let Callasia’s friendly look deceive you: It is not a game without challenge, and it requires plenty of patience, strategy, and perseverance to soldier through a campaign. Skirmish mode was more appropriate to my (impatient) style of gaming. During this mode, you have forty turns to conquer as much of the map as you can, with two other factions opposing you.

I had a lot of fun playing these short skirmishes, and I will probably return to Legends of Callasia to see if I can finally muster the patience to win a campaign level. If strategy is your thing, or if, like me, you want to see what it’s about, don’t hesitate to try out the demo. Boomzap recently released an iPad version, and I think Callasia’s aesthetic will really shine on this platform.