When I had the chance to date pigeons in the 2014 remake of Hatoful Boyfriend, I became aware of Devolver Digital, and the fun surprises keep coming. Their most recent delight is a phone game called Reigns. Imagine a dating app for ruling a medieval kingdom, and you get the most basic level of the game. However, Reigns is deceptively layered, and hours of swiping left or right hasn’t bored me yet. 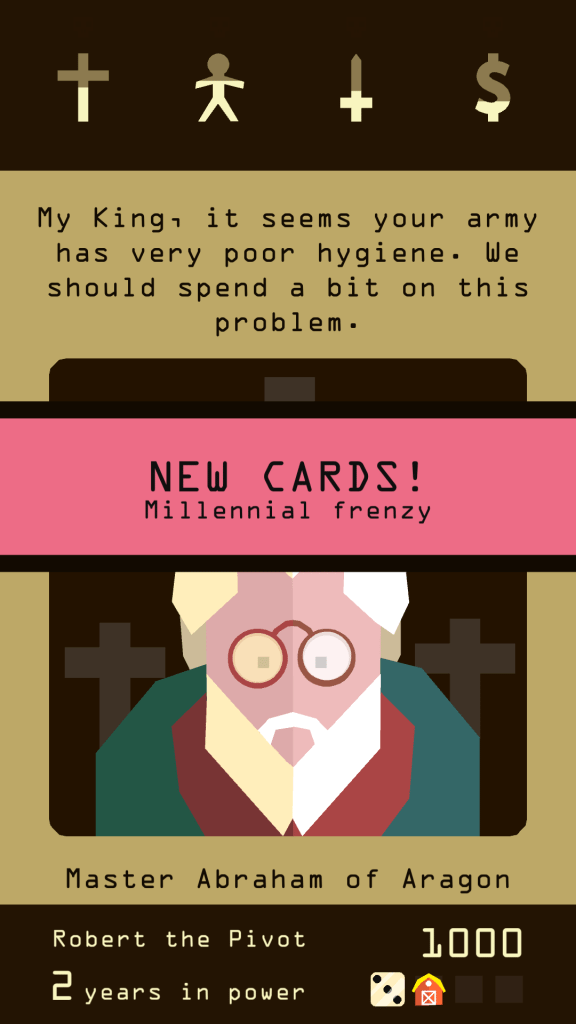 At its core, Reigns is a clever card game. There’s you (the King), four bodies that make up your kingdom, and a deck of cards to be flipped one at a time. The four bodies of your kingdom are the Church, the People, the Army, and the Bank. On the bottom of the screen, there’s a counter indicating how many years you’ve ruled, your current name, the current year, and four slots for gained attributes. The cards are as simply designed as the game mechanics, but are all the better for it. There are no frills and no distractions. Just well-represented characters.

The game starts out with you as the new King. The game flips a card, asking you to make a decision. The objective is to keep the four bodies satisfied, without allowing any single one too much power. Letting the level of happiness to run out on the Church will likely result in your death via religious riot. Too much power for the Army may mean you’re ousted by the new military state. 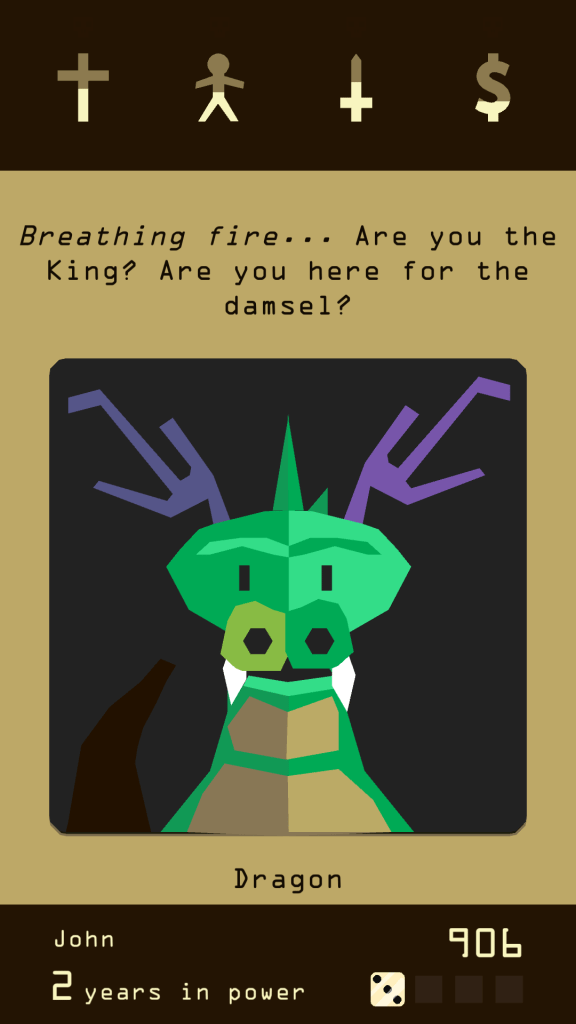 Currently, in my own game, my idiotic jester is suggesting to me, “We should systematically blame the Islander migrants for everything that’s wrong in the kingdom.” Beginning to swipe right to indicate that I will take this route shows me that all four of my kingdom’s bodies will be affected, though it doesn’t show whether it will be for better or worse. Swiping left, saying no, only affects the bank in one way or another. Because this particular King is not being played as a conservative despot, I swipe left and my bank takes a hit.

Each decision made causes years to pass and echoes onward into time. Disagreeing with one of my advisors about building a barn to store grain may cause my citizens to starve when there’s a fire in the fields many cards later. Choosing to sign a peace treaty with another country may gain you a new character in your court (there are 37 total). Not everything is a practical decision to be made though. The game comes with a list of objectives, three of which are presented to you at the beginning of each King’s rule, but the full list of 40 objectives are available via the main screen. Achieving some of the goals requires you to do things like venturing into dangerous dungeons inhabited by fencing skeletons or eating a blue mushroom picked by a member of your court that turns everyone into talking animals. 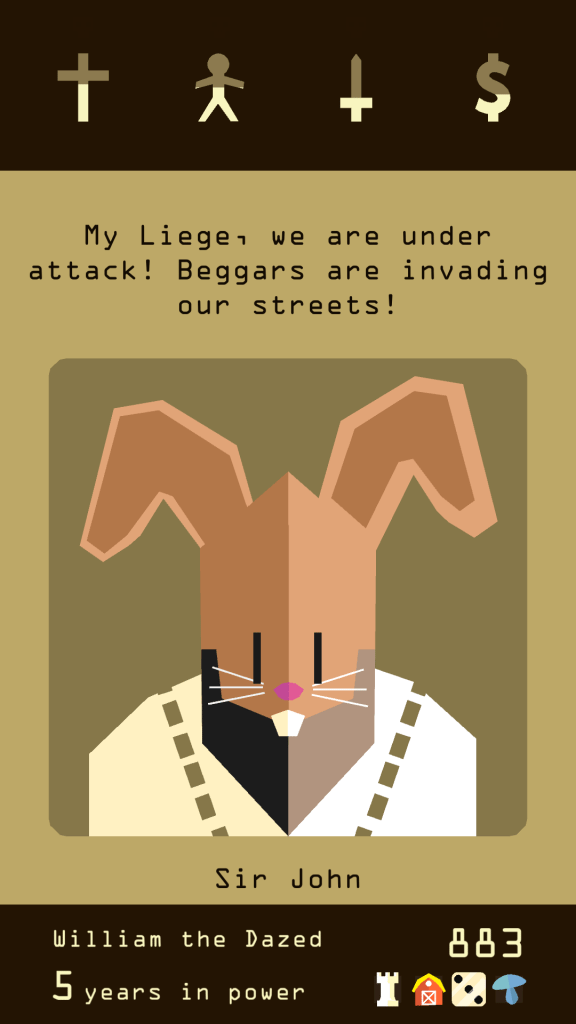 Sometimes unlocking a new advisor or completing a royal deed adds more cards to your hand. You may die before you get to them this round, but they remain unlocked for the future rulers to swipe through. Speaking of death, you will die often. You will become the new King dozens of times until you tire of ruling your kingdom and give up the game or manage to unlock one of three endings. You see, over time, many things change, but your kingdom remains. Some of my Kings have lasted only a year or two upon the throne before cooked by dragon flame or stabbed through in a fencing match. Even my oldest and wisest Kings eventually succumbed to death by overeating, dethronement in an oligarchy, or traitorous progeny. Only one ruler so far, James the Ancient, died of old age. Strategies slowly emerge during gameplay, but they can be quickly overthrown by surprises, like catching pneumonia. No matter how well you plan for the future, death will find you eventually.

There are several endings to the story, each accomplished through complex combinations of successful card swipes. The underlying narrative involves the devil, a hungry skeleton, and a Senator. I won’t spoil the surprises for you, but I will admit that I had to enlist help to discover the right pathways. My first lineage of rulers lived in ignorance of these conspiracies, but that playthrough was no less fun than the next enlightened kingdom I played. 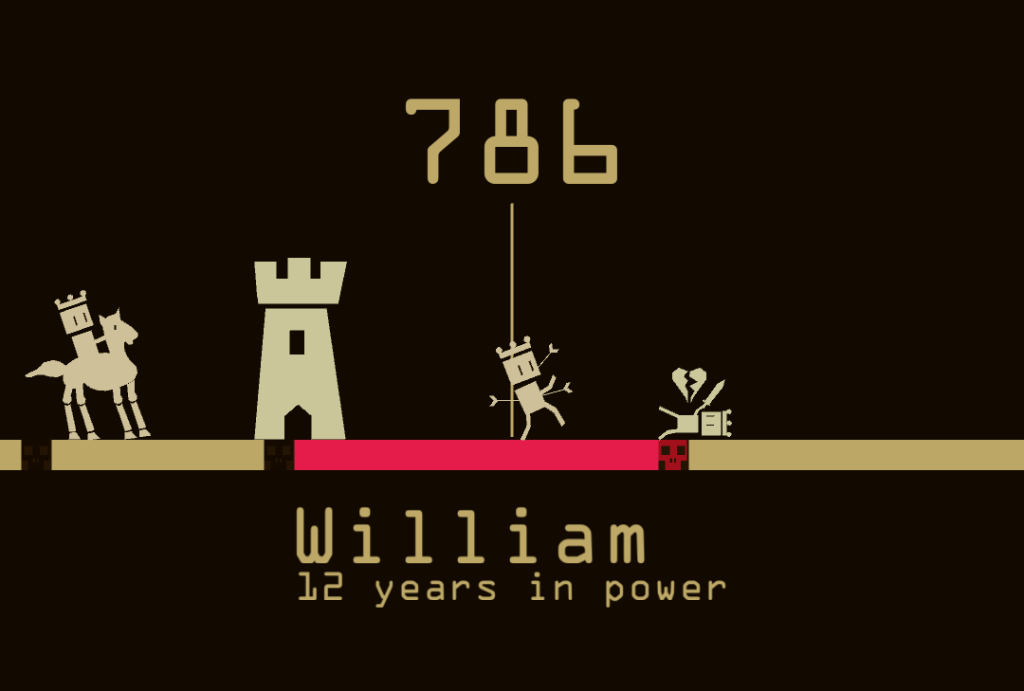 Reigns will remind you of the futility of life. Each ruler, benevolent or greedy, lecherous or warmongering, eventually moves aside for the next ruler. The Church, the Army, the People, and the Bank remain with needs and wants that often contradict one another, and keeping their satisfaction levels balanced long enough to achieve the next objective keeps me coming back for more. My timeline is a collection of Kings who have each failed in their own way, but their collective rule has brought my current kingdom into the year 1290, and I look forward to marching ever onward to the next millennia. Reigns may only require the physical skill of an avid Tinder user, but the story created is worth the price.