Dragon Age Magekiller is based on the Bioware game, Dragon Age: Inquisition. Never played it? Never fear, I’ve done it for you! Reviews for issues #1 and #2 of Magekiller can be found here and here, respectively. 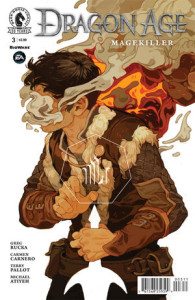 Pissing off the Archon of Tevinter isn’t the best idea, but it seems that the Venatori cult is more than enough to keep the ruler who mage hunters Tessa and Marius betrayed off their tail. Now they have turned their attention to the inconvenient hole in the sky which has weakened the veil separating the real world from the Fade, allowing demons to cross through. With this, the series has officially made itself comfortable in the very recognizable playground of the Inquisitor, the main character of the Dragon Age Inquisition game upon which this book is based—though it’s unlikely we’ll see the Inquisitor herself or be directly involved in the events that play out in the game. Not when the Inquisitor has so many people working for them under the flag of the Inquisition.

But first, Marius and Tessa have to be recruited, right? If you have played the game, you know that recruitment is a big part of the story. So, after a heated battle with several demons in the Hinterlands, that’s exactly what happens, unsurprisingly. But what will this mean for Marius’ connection to the Venatori cult and the mage that got away?

This part of the journey doesn’t spend as long in the Hinterlands as the players do—Carnero does an excellent job of making this familiar area easily recognizable—but it does take time to ferment the relationship between Marius and Tessa during some much needed down time. 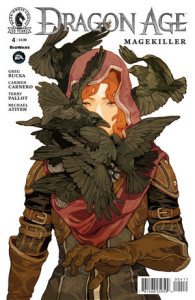 Marius and Tessa are firmly entrenched as a part of the Inquisition, with Tessa even developing a relationship with Charter, one of Sister Nightengale’s best spies. And they already have a mission that brings in a familiar face: Dorian Pavus, a Tevinter mage. This sets off immediate red flags due to Marius’ hatred of the same, but Dorian is both charming and earnest when he needs to be and proves himself worthy of Marius’ trust—if only for this mission, which is to disrupt the Venatori amassing in the Hissing Wastes.

The mission goes where it needs to and the dialogue is fantastic. I have to assume that Rucka has played Dragon Age Inquisition or at least spent more than enough time reviewing character videos to capture the little quirks and personality traits of the non-playable characters, including Iron Bull’s Chargers, who accompany Dorian on this mission.

But while all of these callbacks to the game make me want to go wander around the Hinterlands once more, I find myself wondering where this story is going. Players know what is going on with the Inquisition, but presumably Marius and Tessa won’t be involved in the main quests. And what of Calpernia and the Archon and the other loose strings the mage hunters left behind in Tevinter?

These questions, along with lines and vibrant colours that bring me right back to the many hours I spent playing Dragon Age Inquisition, are enough to make me want more, but I won’t even pretend that my Bioware obsession isn’t playing a big part in my desires…

This is the final battle, and Marius and Tessa have missed it. They sit in the stillness of the pub, while the Inquisitor and her army battle Corpypheus in the Arbor Wilds. But as players know, Corypheus escapes to reopen the breach that began all of our heroes’ troubles. Charter calls upon her lover and those that remain at Skyhold for a very important task: to clear the way for the Inquisitor’s final, final showdown.

Throughout the series, we have glimpsed various events and characters that players will recognize, and while Tessa and Marius have faced down many powerful foes, the focus of the story remains always on them, on the relationship between Tessa and a man she knows so little about. Here, as they join forces with a band of wet-behind-the-ears mercenaries who are likely to become demon fodder on this mission, Tessa is forced to face a frightening question as the world comes to an end: would she die for Marius? Would he die for her? Just how strong is their bond?

In terms of action and epic adventure, despite the giant demon they must fight and the vivid action scenes, splashed in the demonic colours of magic and the elements that pervade the game and the this story, this ending feels somewhat anti-climactic. But Dragon Age (and Bioware games in general) have never been about the epic action and showdowns for me. It’s about who accompanies you, the player, on your journey. Bioware has captured the hearts (and souls) of many players with their unique and endearing non-playable characters. Rucka has done the same with the introduction of Tessa and Marius throughout the Magekiller series. Sometimes, the more powerful story isn’t in getting to the end, but in coming to care for the people who help get you there.