Why I Game: Trying to Try

I’m not a gamer. I don’t think I could check the “gamer” box if asked to fill out some sort of imaginary label survey for my life. I play games, mostly the tabletop and board variety, but I wouldn’t call myself a gamer. Maybe it’s an unfair assumption or stereotype that I have and that I need to get over, but I don’t think I have the knowledge and experience, and let’s face it, hours of game play logged to call myself a gamer. But I love to play games even though it wasn’t always that way.

We didn’t really have a ton of games growing up. We had some of the classic board games—I was a wiz at Sorry! And my brother killed at Monopoly—but no video games. For many years, I thought of video games as basically the only “cool” way to play games. Board games were something you played with your family, so were inherently not cool, Card games were okay, but also very family centered, and role-playing games like Dungeons & Dragons were only whispered about amongst my friends as a haven for nerds, weirdos, and people without friends. Luckily, my family didn’t participate in the Satanist panic of the 1980s and 1990s in regards to Dungeons & Dragons. Us kids already knew that it was just not cool. I have since changed my mind on D&D and play and DM, but at the time it was mostly an unknown entity encountered through TV shows and rumors.

The last frontier was the video game: we had some computer games, but never a console. One of my best friends had an N64, and I remember being so excited to play Mario Kart with her. I was, and am to this day, very, very bad at Mario Kart! Why is it so hard to stay on the road and go the right direction? I don’t know! In college my best friend bought out her NES, and I would play Super Mario Brothers in between classes. I could never get past the first level.

That’s right, the first level. Nintendo why do you torture me so with games at which I am easily bested by children?!

Other than the reasons of lack of money for a console and lack of interest from my siblings and myself, I think the reason why I didn’t play a ton of games as a kid and even past college is that I’m really bad at trying. 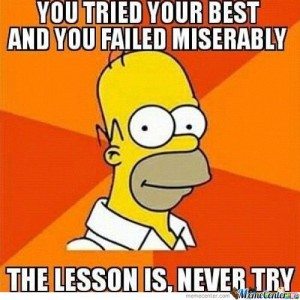 Why do I listen to you so much, Homer?

I’ve written about this in my Dice Vice column before, but it’s really hard to try. I took Yoda’s advice to an unhealthy level: if I knew that I could not do it, I wouldn’t even try. Try a new sport that maybe I would like, but would have to learn some new skills? No thanks, I’ll stick to running since that’s hard to mess up. Try a new time of craft that looks really fun or interesting? No, I’ll probably be really bad at it and everyone will laugh at my attempts.

Again, this is really not a great attitude, and it has kept me from doing a lot of things that I would probably like. When I started playing more tabletop and board games with my boyfriend and friends I had a terrible attitude. If I didn’t instantly and intuitively understand the rules I thought I was stupid and determined to have a terrible time. If I lost I was kind of a dick about it, to be honest, even if the game didn’t have a lot of strategy and a lot was left to chance. I’d still be mad about losing. What was the point of doing something if you weren’t going to win at it?

Then I started realizing that being grumpy about not understanding things wasn’t fun for me or for the people with whom I was playing. I wouldn’t ask questions about a particular move or strategy only to find out if I had asked questions, if I had tried, I could have done a lot better and had more fun.

Trying is not a new or even innovative idea for many people. I so envy the people who really can embody the “I’ll try anything once” mentality. I’d love to be that person! There are a lot of things that I’m interested in that I just haven’t tried because trying can lead to failure, humiliation, and probably other horrible things that only exist in my head.

But in playing lots of games, games where there is strategy and games where your fate is decided by the roll of a die, I’ve learned that trying doesn’t have to be bad. You can try a new game and, sure, you might lose. But you might also discover a new game that you really enjoy, and maybe your friend will make a hilarious joke while you’re playing and you’ll snort beer out your nose. Or you’ll discover that maybe you’re not so bad at strategy after all, you just have to give yourself a chance to try it out a few times.

I game because I want to be a person who tries new things and games help me to become that person. Trying out a new game with my friends over snacks and drinks gives me practice to try out new experiences at work or in other areas of my life. It lets me try to try in a low stakes, enjoyable way. Maybe some day I’ll even get to playing actual video games. I’m working up the courage to try again.