Welcome to An Adventure in Small Games, a monthly series focused on games that cost less than $20, ideally less than $10. In this series, Eve Golden Woods will focus on the indie game and what it has to offer the world of gaming. There will be spoilers. This month Eve takes a look at Stardew Valley.

“I have the perfect opening line for my next article,” I said. “I’m going to start with ‘Stardew Valley is one of the most political games I’ve played this year.’” “Really?” My boyfriend replied. “I’d start with ‘Stardew Valley is the “Hotel California” of video games.’” Now that I come to actually write this article, I think they’re both perfect opening lines. Stardew Valley is a deeply addictive game, hard to turn off and get away from. Even when I’m not playing it, I find myself thinking about it, reading through the wiki and planning for my future. It cuts pretty close to the boundaries I set for this column: it’s more expensive than most of the games I talk about, and it’s also popular, whereas I try to focus on games people might otherwise not play. But it’s compelling, and when I realised about halfway through March that I wasn’t going to find time to seriously play anything else, I decided to take the plunge and try and dig through my thoughts on why exactly I love Stardew Valley, and why I find myself slightly baffled and bemused by it.

Stardew Valley is very well crafted. The systems it builds are simple and undemanding, but there’s enough variation that you always feel like you have something more to do. When I’m not planting crops I’m watering them, when I’m not watering crops I’m checking my animals and collecting eggs, when I’m not collecting eggs I’m cutting trees for wood and venturing into the mines. There’s a whole social aspect to the game too, where you can get to know the inhabitants of Pelican Town, and if you like, romance and marry one of them. The romances are all gender neutral, which helps the town to feel warm and inclusive.

The game as a whole has the feel of a safe space. You can’t starve to death, you can’t die in the mines. You don’t get sick. Your crops can die, but if you water and protect them, they’ll never fail. Some of the townspeople may be hostile at first, but you can win all of them over with time, patience, and the right gifts from your inventory.

Mechanics and story are deeply intermeshed in Stardew Valley, but story is always at the service of mechanics. For example, there’s an evil corporation in the valley, Joja Corporation. They have a big Walmart-style supermarket on the edge of town, which is initially cheaper than the family-run grocery store, but eventually becomes more expensive. The player character used to work for them, and came to Stardew Valley to escape their crushing influence. What’s interesting is that the game gives you the choice to team up with Joja Corporation and use their influence to transform the town. If you do, the game becomes even more systems driven, and you have to manage your crops far more carefully to produce the money necessary to buy into Joja’s expensive town improvements. It’s a legitimate playstyle, but it’s antithetical to the game’s tone and aesthetic. It follows the pattern David Gaider talks about in reference to Bioware’s work: morally unpleasant choices exist not so that the player will choose them, but so that their choice to do good means something.

Joja Corporation’s existence makes the choice to engage with the systems of crop farming, foraging, and rebuilding the Community Centre more satisfying, because they are more meaningful. The Community Centre, in fact, is the centre of narrative and system engagement. It is inhabited by strange, magical creatures called Juminos, who will repair it in exchange for gifts. The gifts are bundles of different resources found in the game: foraged food, crops, materials from the mine, fish, and even gold. As the player completes these bundles the Community Centre is restored and new areas of the game open up. None of the bundles are difficult to complete, though some take longer than others, but they give you a reason to explore all the different things you can do in the game, and the warm feeling you get watching the ruined Community Centre come back to life reinforces the idea that the tasks you’re completing are valuable. It’s a phenomenally effective design, and it makes the game incredibly enjoyable to play.

For me, Stardew Valley has a further resonance beyond merely satisfying systems. I grew up in a very rural community. My parents aren’t farmers, but our society was an agricultural one, and both my parents are avid gardeners. Food was something that came from the supermarket, but even then a lot of it was local, and at the right time of the year there would also be home-grown vegetables on the table. I went blackberry picking in September, combing the narrow lane up to the turlough for the best fruit. I picked apples from the orchard behind my dad’s house, tiny bitter apples native to the area that were misery to eat but excellent in jam and pie. There was fresh fish, too, usually mackerel in October, oily and rich, fried or grilled. I always had a fascination with foraging and herblore, aided by my love of the Redwall series. Abandoned in a wilderness that resembled county Clare, I probably wouldn’t last very long, but I would at least know what was safe to eat. The foraging in Stardew Valley is easily my favourite part of the game, just because it stirs those memories of finding food for myself.

At the same time, I feel like I know too much about farming to fully enjoy the game. Farming is not an easy job. If you have cattle, as so many of the farmers in North Clare do, you have to get up as early as four in the morning to take care of them, even if it’s the middle of winter and there’s bitter wind and rain driving in from the Atlantic. Farming is gruelling labour, sometimes with very slim margins. So much of what’s earned ends up sunk back into machinery maintenance, or buying new technology as it becomes available. Most of the small Clare farmers supplement their income one way or another, by renting bulldozers, building walls, or doing other kinds of construction work.

On top of this, the Burren itself is a unique landscape, and its preservation depends on a careful husbandry of the land that has mostly been lost in the past twenty years, as EU regulations and subsidies make it easier for farmers to winter their cows in barns, instead of turning them loose onto the mountains. The practise of winterage is essential to maintaining the Burren. The cattle would eat the grass on the mountains, stripping it bare, but they would also eat the hazel scrub. This allowed the small flowers that make the Burren famous to bloom in the cracks between the rocks. Without the cattle, the hazel scrub is slowly but surely taking over the landscape once more, and it’s likely that unless something changes, the Burren’s biodiversity will disappear. 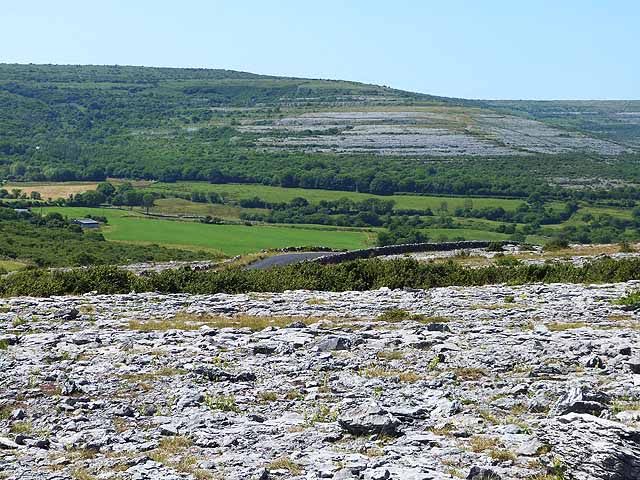 None of this influences my playing of Stardew Valley, but it sits at the back of my mind. I worry about cutting down too many trees, but it’s easy to make sure I’m planting new seeds and keeping a modest forest on my property. On the other hand, I don’t have to worry about dumping nitrogen into nearby lakes and rivers, killing fish populations and causing algae bloom. My fertilizer has no negative side effects. I don’t have to worry about whether to feed my cows silage or hay (silage is not as nutritious as hay, but it’s cheaper to make and far easier to preserve).

All of this is a good thing. If Stardew Valley attempted to depict the true reality of farming, it would be a vastly less interesting game. It would lose its touch of comforting escapism and its sense of fun, and I don’t know that it would gain anything. What I find uncomfortable are its easy solutions. Effective as the game’s mesh of narrative and systems is, it’s also inane on a level I find ridiculous. Solving the town’s problems is too easy, too painless. Stardew Valley wants to have its cake and eat it. It wants to make you feel like a good person, but it doesn’t want you to be challenged. It does that by selling you a fantasy of the simple rural life, the same fantasy that has been sold people since the Arcadia became a word for utopia. That same fantasy is so often used to frame rural Ireland, to reduce the struggles of isolated and underfunded communities to a pastiche of the good life that I find it a tough lump to swallow. Stardew Valley isn’t failing to represent the complexities of agricultural politics, it just doesn’t have any politics. It’s completely shallow. 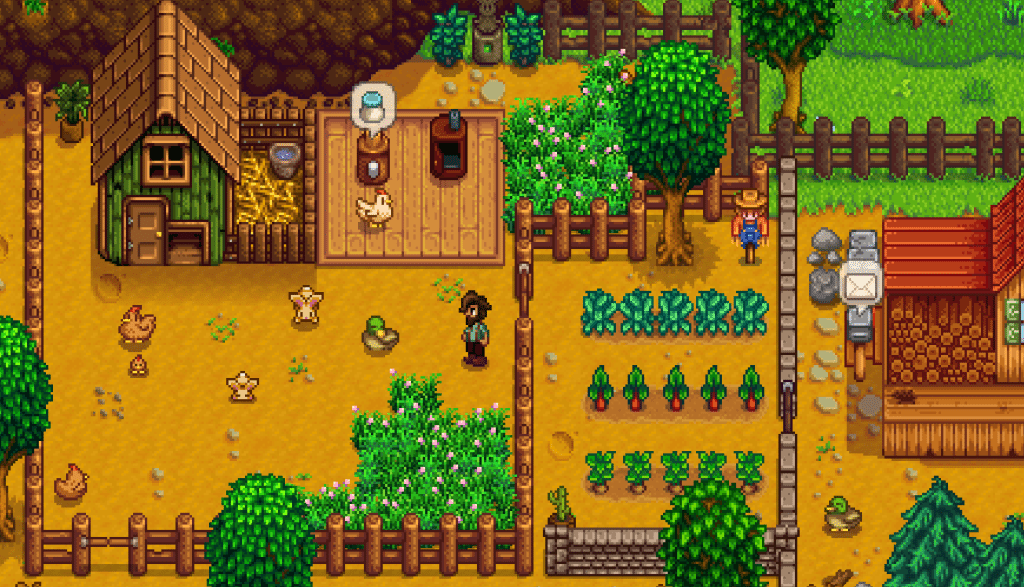 That might sound like a criticism, but I don’t know if it actually is. Stardew Valley is a fun shallow game, and a lot of people enjoy it. That’s probably enough. There have always been games that worked this way, and there always will be. Tensions between art that aims purely to entertain and art that tries to confront something greater have always existed. There’s room for both in the world. But it does make me glad that other, stranger games exist, that there is space for games to be more than just fun. I’m happy to mess around in Stardew Valley, but only if I also get to play Papers, Please, and Oracle, and Dys4ia and Orchids to Dusk. It makes me glad I write this column. Many people will write about <i”>Stardew Valley. If you like it even half as much as I do, you’ll find a thriving fan community ready to talk about it. So I’m happy that, in general, I also get to write about games you might not play, and maybe along the way I’ll encourage you to try something you wouldn’t have, something with a different perspective on the world we all have to live in.