The Pokémon XY Fates Collide Expansion is set to hit shelves May 2nd in the United States. The set is already out in Japan with the title Awakening of the Psychic King (めざめる超王) and some cards are available via pre-release events through participating Pokémon Play hosts.  The set will feature 120 new cards and will fall into the standard format deck play.

What to Look For

With the stiff competition of states came the ever present victory streak of the Night March Deck. With the new Alakazam-EX and Mega Alakazam- EX, a new strategy for quickly shooting down an opponent’s active and bench Pokémon may be an option. The addition of Mega Audino-EX to any deck also guarantees 110 damage with the Magical Symphony move and 50 damage done to any benched Pokémon. With the expansion also comes more opportunities for  trainers to use Break Pokémon for the advantage of higher HP with a larger attack set. Break Pokemon have the advantage of only allowing your opponent to retrieve one prize card after a K.O. as opposed to the two prize cards collected after any EX Pokémon is defeated. In states, cards like the Trevenant-Break and Greninja– Break proved to be worthy opponents against powerful Mega-EX  and EX Pokemon decks.

Another interesting addition to game play with the Fates Collide expansion is the item Power Memory, which can only be used by Zygarde-Ex. An item card this specialized is not typical. The special treatment of this tool card gives Zygarde-Ex a fourth attack: All Cells Burn which packs a punch of 200 damage. It will be interesting to see if this card give Zygarde-EX a clear advantage. 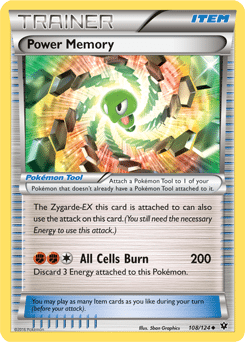 Head to stores May 2nd to see what other item, supporter, trainer, and new Pokémon could be added to your deck just in time to prepare the ultimate deck for the summer Pokémon National championships.