After a long time of ignoring the culture surrounding smartphones, Nintendo has released its first social media app, complete with a dress-up game and pachinko-style minigames. I’m a sucker for virtual clothes and being Skinner boxed by “I nearly had it!” games, so I was eager to try out Miitomo. 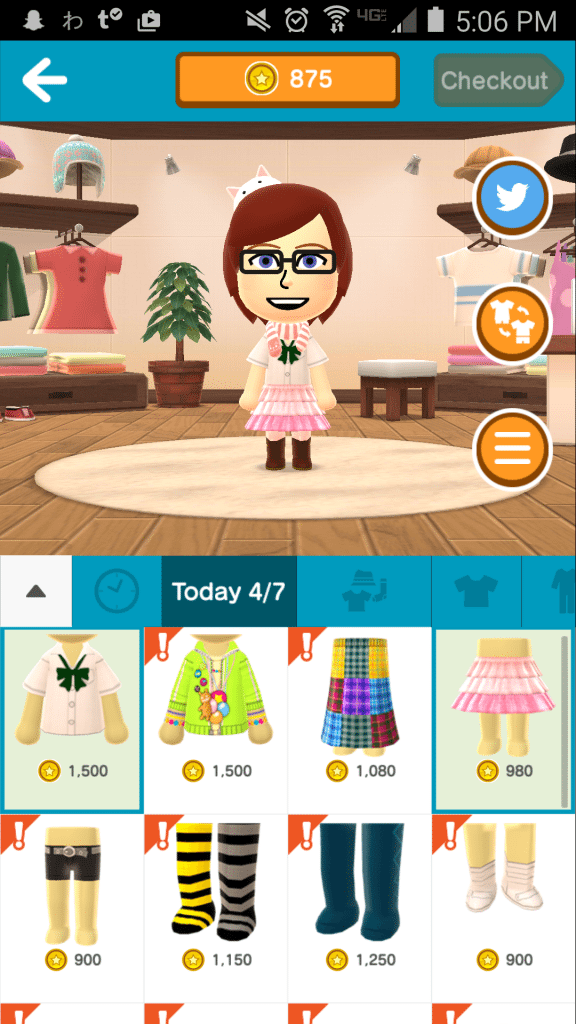 The fashion design in Miitomo is super cute!

Miitomo reminds me a lot of Nintendo’s earlier game Tomodachi Life, a more restrictive life-simulation game where you put a bunch of characters together and see how they act together—but only heteronormative Miis allowed. Nintendo later apologized, saying they never intended to make “social commentary” with the game, showing that they kind of really missed the point, but they also pledged to do better were there to be another game in the series.

Miitomo isn’t really that game, but it is much more the game with a sense of community than Tomodachi Life ever was. Miitomo is primarily a social media app where you use an avatar. Upon starting the app, you’ll be prompted to either import a Mii from your 3DS or Wii U (if they’re connected to a Nintendo account). If you’ve made a Mii before, you know exactly what to expect; Nintendo doesn’t offer a whole lot of customization, but there are several hairstyles to pick from, some varying skin tones, and some different face and eye shapes. You also get to fill out a personality chart, though I haven’t noticed that impacting the way your Mii acts. After choosing a voice, you’re set for what I consider the best part of the app … dress-up!

The shop contains tops, bottoms, full-body outfits, hats, socks, shoes, and accessories around your neck or back. Each day, Nintendo adds about thirteen additional items available for the day. Even on the first day, I was impressed by the variety in clothing options. I tend to stick to the pinks and reds and items I find cute in general, but there are other looks ranging from sporty to silly to business-like to flashy and colorful. Bundled in the shopping area is Miitomo Drop, a pachinko-style game where you drop a Mii in a pinball arena. It’ll bounce off the walls and other obstacles, and whatever it lands on is the item you get. When Miitomo launched, everything was about cats, and I invested a lot of time into getting cute cat-themed sweaters, tights, hats, and even cats themselves! I should also mention that none of the clothing is restricted to a specific gender (unlike in Pokémon X and Y)! 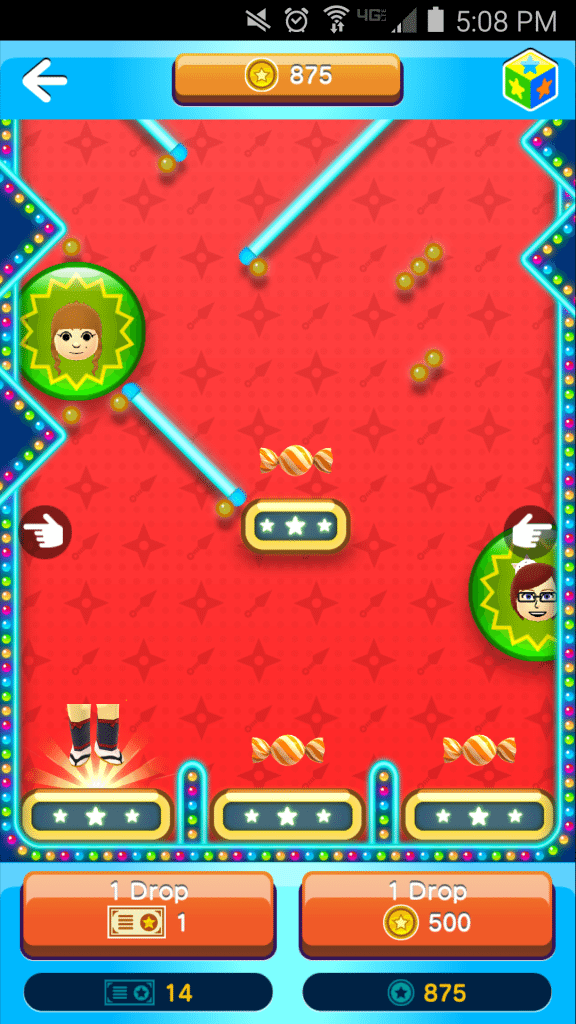 One of the current Miitomo Drop minigames is for ninja-themed items.

To get these items, primarily you need coins. And now comes what the bulk of Miitomo comprises: questions and answers with your friends. Miitomo is mostly a social media app, and it’s built on your answers to questions and your friends’ replies to those answers. Interacting with people is the primary source of where your money comes from. The clothes store in Miitomo only uses coins, but Miitomo drop uses both coins and game tickets, which you can earn by “leveling up” your personality and your fashion, which just means you’ve added friends and changed your clothes.

Miitomo‘s a blast for the first day; I was happily chatting away with friends, dressing up, taking photos through Miifotos (a surprisingly deep photo editor), and talking about the tastiest kinds of bread. That following weekend, I found myself checking Miitomo less often. After all, there’s really only so much you can do in an app where the meat is answering questions about yourself. And because you’re rewarded for making content that’s pleasing to your friends—the more likes you receive from your friends raises your popularity level, thus earning you more game tickets—I feel pressured to be funny more than to honestly answer what I’m doing this weekend.

Even if it’s not the most engaging app—and I’m unsure what Nintendo’s long term goal for it is—it’s an easily accessible one. It’s free, it’s working pretty well on a pre-owned phone I use, and its menus aren’t complicated.

I expect Nintendo to work Miitomo into its rewards through the newly launched My Nintendo website. The points you receive in Miitomo for commenting and answering (these are separate from the coins you earn by doing the same) are one of three kinds of points tied to your My Nintendo account, and you can redeem them for discounts on Nintendo games or Miitomo-specific rewards. Currently, the points earned in Miitomo and platinum coins (you can get some by connecting your social media accounts to your My Nintendo account) can be used together for some 15% off discounts on specific games. Making purchases in Nintendo’s eShop earns you gold coins. So, right now it seems the points you earn in Miitomo can add up over time and get you discounts on Nintendo’s games.

Nintendo getting into the realm of smartphones affirms games are everywhere—not just on game consoles or computers. (The last four games I’ve played have actually been on my phone!)  If you use Miitomo, show us your photos!