Nintendo of America hired Rapp after the publication of this article. The company either did not research her before hiring her, or they found the paper a matter of no alarm. Nintendo of America has been silent throughout months of regular harassment and abuse that Rapp has received—abuse centred upon the memetic accusation that Rapp’s paper is in promotion of paedophiles and paedophilia. 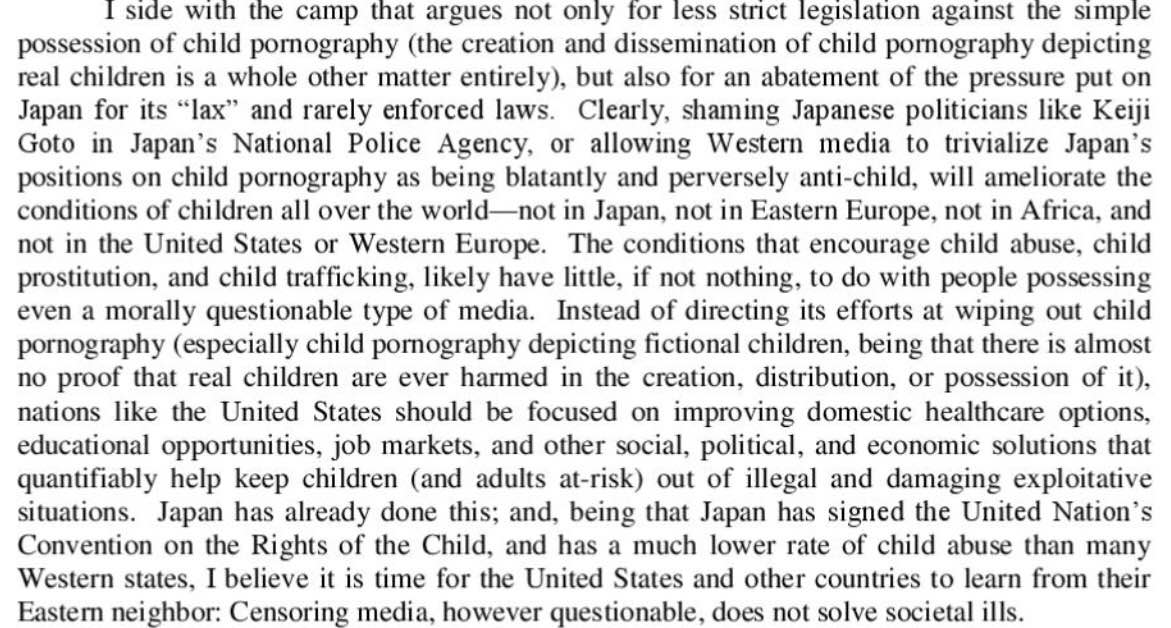 The position she takes is that those countries with harsher child pornography laws use these as a moral high ground from which to pour shame on Japan for reasons of cultural imperialism — that judging a country for its stance of the production and dissemination of inorganically generated child pornography is disingenuous, and based in primness and xenophobia. She puts a lot of stock in the definitive negativity of censorship. I would personally call a lot of her opinions nonsense. The ability to groom a child with images of sexual childhood is not reserved for the individual, or the active criminal agent. To assume that grooming is not a social problem, or a process that can manifest though access to such imagery alone, is to be at fault.

Rapp says a fair bit of weak bullshit in her paper, not least of which is her statement of desire for rational objectivity in the discussion of child pornography. She does not advocate the sexual use of real children. She makes some effort to separate the need for policing the presence of children in live pornography from the lack of need to police the evocation of children by draughtsmen, digital sculptors, or other methods of production of pornographic imagery featuring children. Child abuse as a phrase, her semantic construction infers, is active and must refer to behaviour directly received from one or more adult individuals to a child or children. Pictures of imaginary children (or, she leaves room to suggest, drawings symbolising real children) are created by adults, shared between adults, and in this perfect hypothetical construct real children are left out of the chain of contact all together. As an argument for the removal of anti-child pornography legislation in Japan, it’s short-sighted, baffling and distasteful. “Let the Japanese be Japanese! They just DO this stuff. Young people are just sexy over there, but almost nobody rapes anyone underaged, and so none of them mind at all!”

I am not inspired to be friends with Alison Rapp, and I am not overjoyed at the thought of her being a voice in the marketing of video games. But this is not a matter on which GamerGate should have been consulted.

Rapp had been targeted by the hate group, and—can we let all abusive trolls overtly angry about video games fall under the umbrella of GG? We can? Alright. Rapp had been targeted by GamerGate for some time before the paper on her LinkedIn was discovered, read, and found controversial enough to be easily malleable. It’s a paper that contains a sentence about the harmlessness of paedophilia, and for GamerGate —  famously found repulsive for the juvenile pornography that abounds on its regular forums — this was like a knife offered handle-first. All you have to do is push a little and it’s guts on the floor. Rapp intended her sentence to be a careful dissection of thought from action, the idea that internal desire can never be criminalised or morally answerable, that only action taken must be judicable or relevant to one’s social standing. If you think “I’d love to do that bad thing,” you’re fine, but if you do that thing you’re not.

But the boob-slider! Beg pardon, I got ahead of myself. Rapp was employed at Nintendo of America and Nintendo of America planned to remove a character-building mechanism in their westernised release of Xenoblade Chronicles X. The function to be removed was a slider which enhanced or reduced the breast volume of female-designated characters. Tragic and noisome masses dearly treasure the ability to wail like banshee babies when a game publicly reduces its players prospective ability to violate and control (woman) characters and (woman) character designs, and so: they wailed. Rapp, being a lady, being employed in an adjacent role to the team or management professional who chose to nix the boob-slider in an all-ages American product, became the target of the hunt. And the rest is history. It turns on a dime.

Alison Rapp is the victim of a subcultural misogyny which could strike any one of us at any time. If it does, our larger cultural footings will not help us—Nintendo (of America) said nothing about the hailstorm of persecution Rapp suffered, no matter that it hinged on a paper which they should have known she wrote. Do you really hire a marketing professional without reading the whole of their LinkedIn? Do you? Fire that HR employee, Nintendo of America.

But, no. They fired Rapp. The Speech We Hate is not just the “free” speech that constitutes drawings of children experiencing intercourse. It is the speech of legion that seeks to repel and destroy women, non binaries, and notably queer men who dare to dream that maybe they could make their living from getting digital entertainment to you. Let’s poise ourselves against both, hm?