A review copy of this book was provided by the publisher, and this review contains spoilers.

Though he’d sworn never to return to the place of his enslavement, in the first issue of this new Dragon Age comic book series (reviewed here), Marius and his companion, Tessa, are lured back to Tevinter to rescue children from evil mages. Unsurprisingly, this was a ruse and the pair of magekillers walk into a trap. What is surprising is who is at the head of this trap and what he wants. 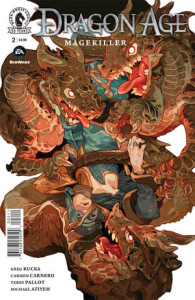 The Archon of Tevinter needs Marius and Tessa’s magekiller skills to thwart a growing concern: the rise of a cult calling themselves the Venatori who seek the return of Tevinter to its former glory. The Venatori’s goals seem like they ought to be in the Archon’s favour, but there is far more at stake than the Venatori seem to realize. The threat of a renewed Imperium would force the hand of the Divine, bringing about a war that would focus Tevinter’s attention away from the Qunari across the sea, who are just waiting for the perfect opportunity to once again invade the continent of Thedas.

Dark Horse describes this series as a good place for new fans to step into the world of Dragon Age, but there is still much a new reader would be missing. Not the least of which is the fact that the Venatori are led by the ancient darkspawn, Corypheus, who already has plans for dealing with the Divine.

While playing Dragon Age: Inquisition, I was unimpressed by the introduction of the Venatori. A cult of disruptive fanatics can be too simplistic a plot device, but Rucka’s story seems to be offering a bit more depth to the cult’s goals as well as its members—some of whom, players will recognize.

On the surface, not much seems to happen in this issue. The Archon gives Marius and Tessa four targets and they defeat them fairly easily despite the physical power and political significance of these mages. In the first issue, we get to see Marius’ and Tessa’s physical prowess and cunning used against mages. I liked the subtlety and versatility we get to see in their tactics here, including how well they work together and separately. But the fourth mage is where the problem lies and where the story of the Venatori promises to become more than just a bunch of pesky fanatics messing around with blood magic and demons.

Tevinter remains an enigma for players of the game, appearing only in name and through certain characters and codex entries. It’s only in the comics that we’ve actually gotten to see this incredible place. Like Rucka’s writing, Carnero’s art works with subtlety—a “less is more” that reveals the Byzantine-esque opulence of the capital city of Minrathous. 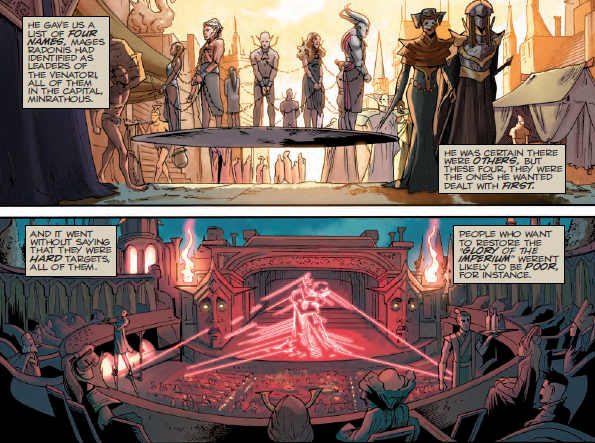 Through deceptively simplistic images and almost monochromatic panels, Carnero paints the lifestyle of the people, contrasting the extravagance of the nobility with its servants and slaves, with the latter being an ever present reminder of Marius’ apparent hatred of Tevinter.

Rucka continues to use Tessa’s voice to narrate the story. She no longer needs the level of exposition that was required to introduce everything in the first issue, so what we get now is more to the point narration tinged with Tessa’s sarcasm and her loyalty to Marius and their cause. We still don’t know much about Marius and his goals though, but again, this issue offers us a reveal that deepens that need to know more. And you better believe that after this issue, I need to know more.