The Longest Night: Stargazing at the End of the World

Welcome to An Adventure in Small Games, a monthly series focused on games that cost less than $20, ideally less than $10. In this series, Eve Golden Woods will focus on the indie game and what it has to offer the world of gaming. There will be spoilers. This month Eve takes a look at The Longest Night. 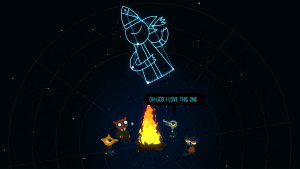 Four young people are sitting around a campfire, looking at the stars and joking about the stories behind the constellations. Bea makes a joke about living in the suburbs, which sets her friends off immediately. “This isn’t the suburbs,” Mae says. “Yeah, you need a city to have suburbs,” Angus says. “We’re in the dead centre of nowhere,” Mae complains. “It’s like a forty minute drive if you want to buy shoes.” That was the moment I knew I loved this game, that instant brush of recognition, that I’ve-been-there feeling.

There is little that is as satisfying as a good concept well executed, whether the feeling comes from a short film, a short story, or a short game. The Longest Night is a solid concept, a little frame to explore a world and introduce some characters, but its execution lifts it head and shoulders above many longer, more complex games.

The characters in The Longest Night may not look human—Mae is a Cat, Bea a crocodile (or perhaps an alligator), Angus a bear, and Greggory a fox-like creature—but they feel like me and my friends. I’m pretty sure I’ve had variations on their exact conversation, in fact, sitting around talking about the ridiculous stories behind constellations. Their dialogue is so vivid and funny and human that they feel far more real to me than, for example, the characters in Life is Strange. Life is Strange has received a lot of criticism for its dreadful dialogue, but it’s worth comparing it to The Longest Night, because the difference is so huge. Consider this exchange, from the first conversation Max and Chloe have:

Chloe: So what did Nathan want with you?

Max: Hopefully nothing after today. So, how do you know Nathan?

Chloe: He’s just another Arcadia asshole… your friend really took a beat-down for you.

Leaving aside the naff slang and cringe-worthy attempts to emulate teen-speak that emerge elsewhere in the game, this dialogue falls apart because there’s almost no subtext. Everything is laid out on the surface, and the characters are doing nothing more than trading basic information, some of which the player already knows. Compare this to a moment from The Longest Night, where they discuss the constellation Harmonium, head of the singing orders of angels:

Bea: Ugh. This one. My mom always said I looked like this one.

Mae: Leading so many cranky angels. Grouching hard. Across the sky.

There’s a few different reasons why this exchange is so much better. Some of it is the pacing of the sentences. Where Max and Chloe have overly long chunks of dialogue, every sentence complete and grammatically correct, Bea and Mae speak in half-swallowed chunks. The conversation bounces back and forth as they respond to each other’s ideas. There are also several discrete emotional turns in these five lines, whereas Max and Chloe maintain the same flat tone throughout their exchange.

We see Bea’s annoyance at her mother, Mae’s imaginative leap, Bea’s irritation as she assumes Mae is teasing her, Mae’s imaginative expansion of the idea, and Bea’s acceptance of the reframed similarity. We know just from this that Mae and Bea know each other extremely well. Bea is suspicious of Mae’s “I can see it,” because she knows Mae is the kind of person who likes to tease and can sometimes even take it to mean extremes. And Mae knows Bea well enough, and likes her well enough, to give her an image of herself that is honest without being critical. 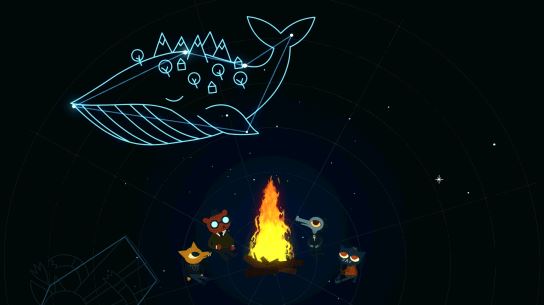 The gameplay for this game is simple, but carefully designed. The main player input is linking up the stars to draw the patterns of the constellations. The stars each have a sound, and you link stars with the same sounds together to make rough outlines that are then filled in with details. The balance between the blocky shapes you make and the constellations they become is very well done, and the feel of linking up the stars is very satisfying. There’s just enough trial and error that you feel like you’ve figured something out when you finish a pattern, and the way the sounds blend in with the background music is lovely.

The other, much less used mechanic is dialogue related. Sometimes you’ll be presented with two dialogue options for Mae and asked to choose one. They don’t really affect the outcome of the game in any way, but they can show slightly different dialogue, and a couple of them allow you to define, to some small extent, the kind of relationship Mae has with her friends. Mostly, they serve to centre Mae as the main character, which is crucial to the tone of the ending. The Longest Night doesn’t strive for mechanical depth, but it also doesn’t need it. What it has is more than enough to let the player feel like they can playful engage with the narrative space they are given. 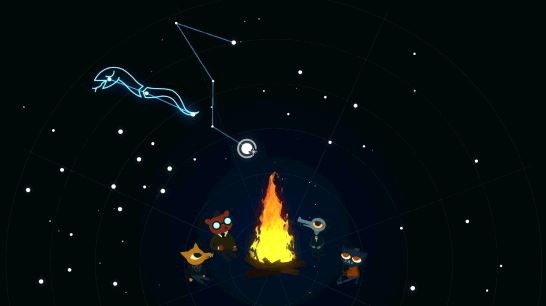 The Longest Night indulges in the kind of world-building I like best, where a history and a mythology known deeply to the characters and not at all to the player is discussed rather than explained. Mae, Bea, Angus and Greggory have no interest in explaining full and detailed histories. They are far more interested in their own opinions of and reactions to the myths they know. Frequently details escape them, or they remember the stories differently. Their reaction feels very visceral, like the one you would get if you asked four moderately nerdy 21-year-olds to explain the story of Cassiopeia or Aquarius.

World-building like this works especially well, because it creates a tension between the characters and the world. When Bea complains about the sexism in the story of Quinona, whose head spoke the names of her murderers after her death, it gives us a huge amount of information in a few words. We know something new about Bea, about her life, her beliefs, and about what she considers important. We know something about the world, about the kinds of legends it has, and about how it frames women. We can guess that, like our own world, its past was more patriarchal, and that it has since moved (if only a little) towards greater equality. Beyond that, the fact that all of this information is assumed to be instantly understood by the player allows the game to treat it as background and to layer over it the wary irony of a 20-year-old, the cynical feeling that the narrative of the world has already been written. 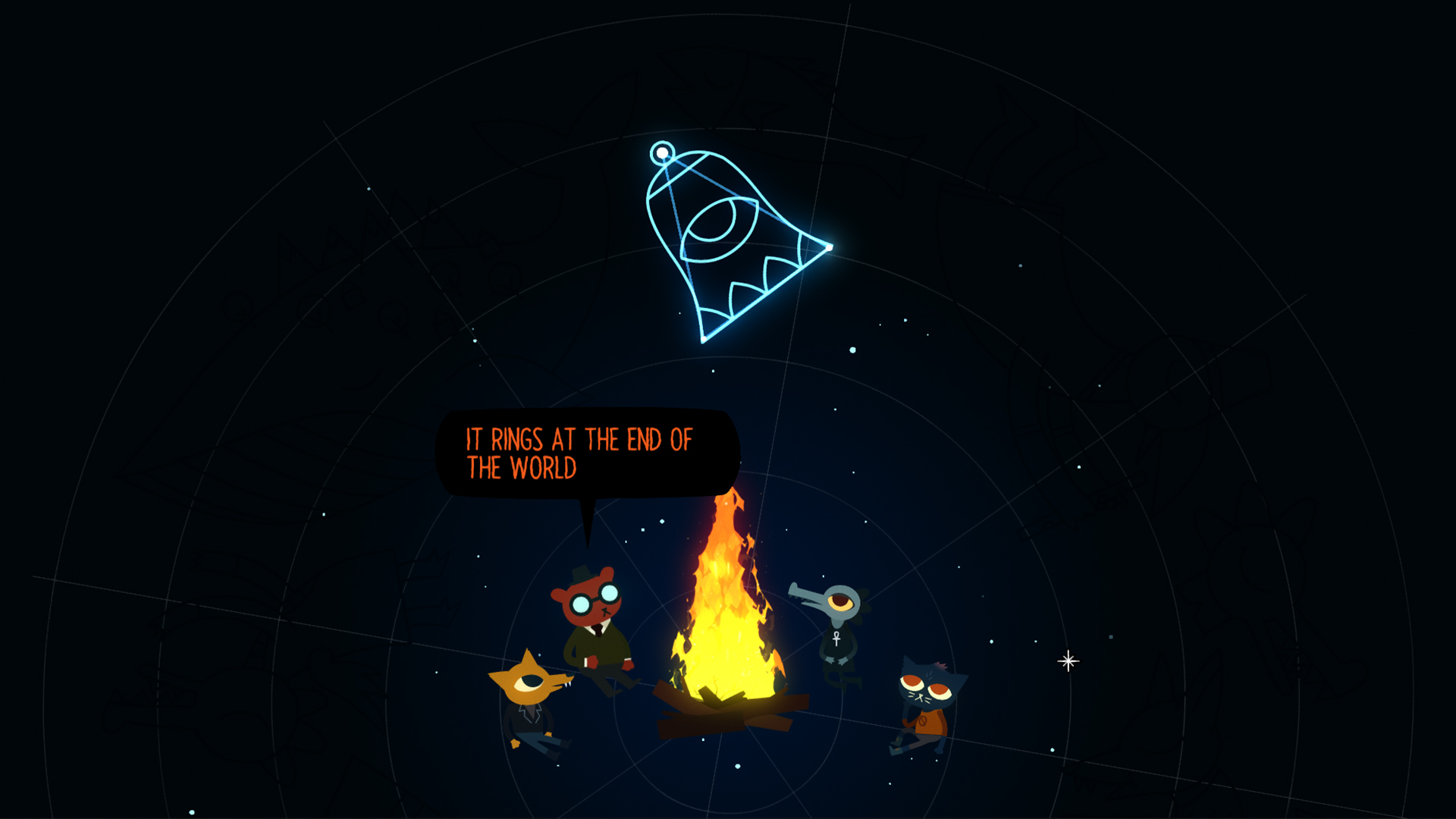 Beyond its own charms, The Longest Night is interesting, because it’s a teaser for a much bigger game, Night in the Woods, due to be released this year. Using short games as teasers or trailers is something that has become more popular in recent years, and it’s a trend I’m delighted to see growing.

Like Night in the Woods, the Indivisible demo is meant to create excitement for a crowd-funded game, and like The Longest Night, it works because it highlights the unique strengths of the studio and the game itself. Indivisible’s fluid, exciting gameplay is worlds away from The Longest Night’s campfire conversation, but both have an excellent balance between feeling complete in themselves and making you want more.

Though it was developed on a budget of a completely different scale, P.T. is also an example of this, telling a short, contained story that may or may not have related narratively to the Silent Hills game Hideo Kojima wanted to make, but definitely captured the atmosphere he wanted. Short games like these aren’t easy to make. They require a lot of skill and a very concrete understanding of the mechanics, atmosphere, themes and world of the larger game they’re intended to reflect. That’s also why they work so well, and why they feel so compelling. The Longest Night would be a good game all on its own, but knowing that it’s part of a larger universe, that I’ll get to spend more time with these characters and learn more about them, makes it genuinely exciting. Episodic content has become popular of late, and been used badly and well, but this is something different. I love the idea of games that interconnect like this, that relate to each other not like episodes of a TV series, but like stars in a constellation.