Although I had met Cheyenne Wall-Grimes a time or two before, it was really my experience with her at Metatopia, a gaming convention for designers, that told me the kind of person she was. It was my first time attending, and I was really not sure about this whole designer business. I was probably trying to fade back into the wall before someone spotted me and alerted everyone that a “fake designer” was there, when Cheyenne walked right up to me and introduced herself. She told me it was her first time there too, and I looked a little lonely, so I could hang out with her and we’d have a great time. Not only was she right about that last part, but it was a very kind gesture that was truly heartfelt and upheld throughout the entire convention. That’s just how Cheyenne is, and I was not surprised a bit to hear she was designing a role playing game about being a kitten. 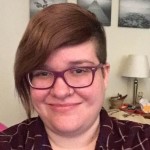 Hey Cheyenne! Could you tell us a little about yourself?

Hi! I’m Cheyenne Wall-Grimes. I am half of Glittercats Fine Amusements, with my fellow bunny in crime, Stentor Danielson. I’m based out of Cleveland, OH.

How did you get into game design?

Completely by accident. I’ve been roleplaying for about eight years and was content just playing awesome written by other people. Then, I became friends with some of those awesome designers. Needing a creative outlet in my life, it seemed only fitting. It’s really nice being able to think, “Hum, I would play that game! Does it exist? NO? Well then, why don’t I write it…”

What’s it like designing with one of your friends?

It’s actually really great. We are good at opposite things, which makes us a fantastic team. He’s being a great money man and awesome with mechanics. I’m great at coming up with crazy ideas and doing PR and promotion.

Let’s talk cats. How many allow you to live with them?

Only one at the moment. Julius is 11 years old, FIV+, blind in one eye, missing a fang, and has something wrong with his vocal cords, so the only noise he can make is “ACK.” I was looking for an older cat to adopt, and his story broke my heart and I knew I had to bring him home. I would love to get him a cat of his own, but our lease only allows us to have one cat. 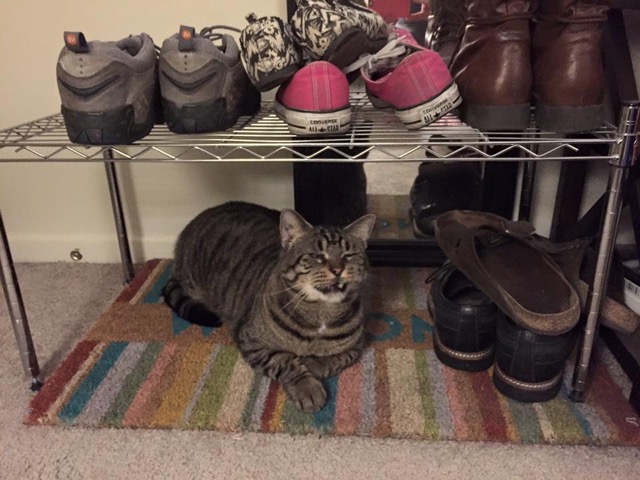 Julius himself! Look at this cutie!

What’s this Knoll Street School for Wayward Kittens I see you posting about?

KSSFWK is actually the name of Stentor’s house where he and his wife, Christina, foster adorable kittens for the Western PA Humane Society. They’ve been fostering for about four years now, and it’s so much fun. Professor Monks (The real star of our Kickstarter video) is a foster failure for a litter last year.

Where did the idea for Laser Kittens come from? What’s the game about?

From all the fun of fostering! It’s so great watching tiny puffs of fur grow bigger and develop little cat personalities.

In the game, you play a litter of foster kittens who interact with adult cats (Professors), humans, and other “not cats” to learn how to cat and how to control your laser. You get into all kinds of fun adventures and learn lots of important lessons.

Would you recommend it for non-gamers who love cats? What the learning curve on getting a game started?

I actually just ran a game at a convention where a player sat down, said “I don’t like cats. Let’s play!” It worked out great! As long as you like how silly a game about being a kitten can be, this is the game for you.

We made the mechanics very simple and you use numbered playing cards for bidding and conflict resolution, so the game is great for kids and even newer roleplaying adults. The focus is far more on telling a great and fun story, not the mechanics.

You and Stentor just launched the Kickstarter this week. How has the prep leading up to it been? Are you enjoying it now that it’s going on?

We got as much written as we could so the book will be ready soon after the Kickstarter is done. Lots of interviews and playthroughs to show the game off and make sure people hear about it.

It is actually a lot of fun to see people who love cats get so excited. We have a pledge level where you can have your cat drawn by our artist and used as an NPC in the game. A woman messaged me about how she just lost her 14-year-old cat and backed at that level to be able to have her kitty live on forever. So sweet.

What’s your next project, and are cats involved?

I produced an ashcan version of a game called The Fool’s Journey last year, and I really want to do a Kickstarter for it to make a full size book and commission artist to make tarot decks for it. That’s on my radar.

You can check out the Laser Kittens kickstarter, find out more about Glittercats Fine Amusements (and many cat pictures) , or follow them on Twitter.