Orchids to Dusk: The Hill You Die On

Welcome to An Adventure in Small Games, a monthly series focused on games that cost less than $20, ideally less than $10. In this series, Eve Golden Woods will focus on the indie game and what it has to offer the world of gaming. There will be spoilers. This month Eve takes a look at Orchids to Dusk.

Death is the great human obsession. The end of our lives hangs like a question mark before us, a void of uncertainty. We can see death from the outside, and write and talk about the way the deaths of others affect us, but the true internal experience only happens once, and no-one comes back to tell us of what lies beyond that moment. And given that no-one has yet invented immortality, we live with the knowledge that we too will one day die.

Personally, I find the thought terrifying. I’m not religious, and when I imagine my death, void and silence are what I envision. I love the world, in all its beautiful, frustrating, fearsome glory. The thought of losing that is the scariest thing I can imagine. Mostly, I try to simply embrace that fear. Since I can’t change it, I try to understand it. I wonder, having played it, if Orchids to Dusk arises from a similar impulse.

The game opens to a title screen, words set against a desert background of burnished golds, the saturated colours of a late September evening. Click to begin, you are instructed. When you do, the colour and light falls away, and you find yourself in the dark void of a loading screen, where an astronaut hangs in her seat, surrounded by flashing buttons and the grating beep of an alarm. Her surroundings vibrate intensely, and we know instantly that she’s about to crash. Which she does as the loading screen fades away, with a reverberation that echoes through the world. The controls for the game appear briefly on the screen and then fade away to reveal the world our astronaut has landed on. 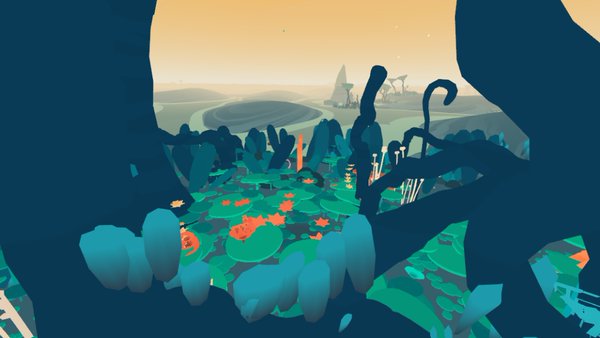 It’s a bleak desert, huge mounds of turquoise sand piled up in rippling dunes against a yellow sky. Patches of stone rear up against the sky, and in the hollows and dips lie patches of pale stone or sand. In the distance, there treetops are visible. To the left of the screen is a very pointed, very visible oxygen meter, slowly decreasing. If the astronaut walks fast or climbs hills, it decreases more quickly.

The first time I played, knowing that I would die, I decided to make the most of it. I set off across the sand, determined to reach the distant trees before my oxygen gave out. Sooner than expected, with about 60% of my oxygen remaining, I found myself in a little oasis, with trees and flowers. As I admired it unmoving, the astronaut sat down, tucking her legs underneath her. The music, haunting and sublime, grew louder, and the camera began to slowly spin around her. I noticed a helmet, identical to that on the astronaut’s head, lying on the branch. Someone else had died here, and as I watched the movement of the plants, their gentle undulations, I could understand why. Faint blue and green wisps spiraled out of the sky to hover around the astronaut’s head. In the air above her, a sign appeared. Press enter to take off helmet.

No, I thought, it’s too soon. I’m not ready to die like this, no matter how beautiful my surroundings are. I heaved the astronaut to her feet and set off again. She walked and walked, and at last came to another flourishing oasis, similar but not identical to the first. This time, I was ready. The astronaut sat down, I hit the button, and she set her hands to her helmet, ready to take it off. Better to die in beauty than struggle for a few more moments of futile life, I thought. I hit enter again. The helmet rolled aside, coming to rest somewhere in the tangled greenery. The astronaut keeled over, and to my astonishment, strange vivid growths bloomed from her back and shoulders. Her body disappeared, and a tree stood in its place. The camera spun me slowly around, showing me what she had become. Then I hit enter, and went back to the title screen. 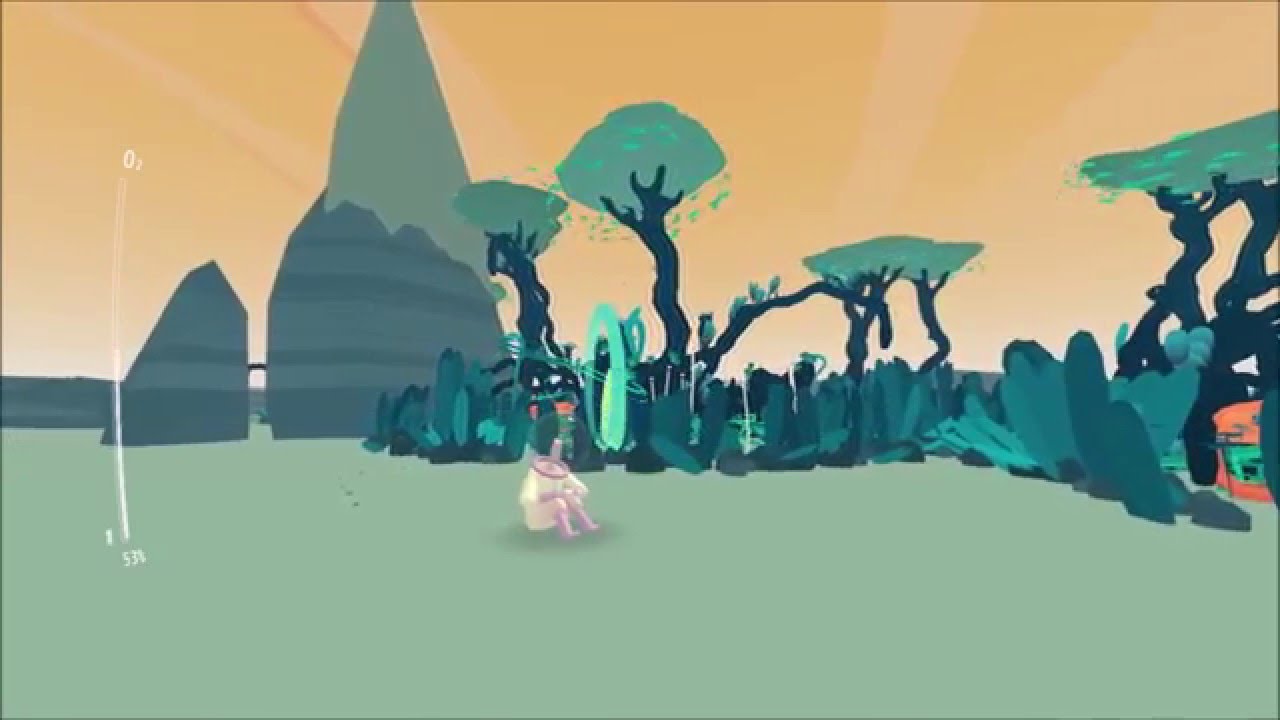 I went back into the game instantly. I sat impatiently through the loading screen, some indefinable, tremulous feeling fluttering against my throat and rib cage. As soon as the astronaut picked herself up from the crash we were off, trotting doggedly across the sands. I didn’t bother heading for the trees this time. I simply found a nice, high hill, with a broad view of the world and sat down. The music was quieter outside the splendid oasis of trees, but it picked up all the same as those faint blue wisps began to coil around the astronaut. I hit enter twice, and her helmet rolled away across the sand. From her body the same fountaining of growth occurred, but this time it spread wider, and in a few moments there was a brand new oasis, spilling out across the sand, full of life and colour and light.

After my first day’s exploration with Orchids to Dusk, I left it alone for a while. I was busy with work, and in the run-up to Christmas, distracted by present shopping, planning, and the other commitments of my life. It was perhaps two weeks before I sat down to play it again. When I did, I found a landscape transformed. It was still mostly desert, the long bleak dunes rolling to the horizon, but there was more growth than there had been when I had left, and in places the oasis formed circles, enclosing hilltops or orbiting a rock formation, clustering together without overlapping. I walked among them, thinking of the other players who had come here, and the choices they had made. Three times, I found bodies, not transformed into growing life, but cold and ashen on the ground, their helmets still on, the glass turned dust grey. These people, then, had made the choice I did not. They had never taken their helmets off. They had died sealed away from the world. One of the bodies was next to an oasis, and I wondered if they had died before reaching it, or if some other player, in commemoration, had left them with an oasis as a companionable gesture.

There’s an obvious metaphor in the game, in the choice to remove or not remove your helmet. Seal yourself off, cling to the life you know you will lose anyway, and you die in isolation. Your body remains frozen on the ground, immovable, unchanging. If you accept death, and make your peace with it, giving yourself up to the world, then you return to it, and it moves through you, granting you not reincarnation, but a kind of transformation. You become a force of change. It’s not a complex metaphor, but what gives it depth is the space it allows you to develop your own emotional response to that metaphor. 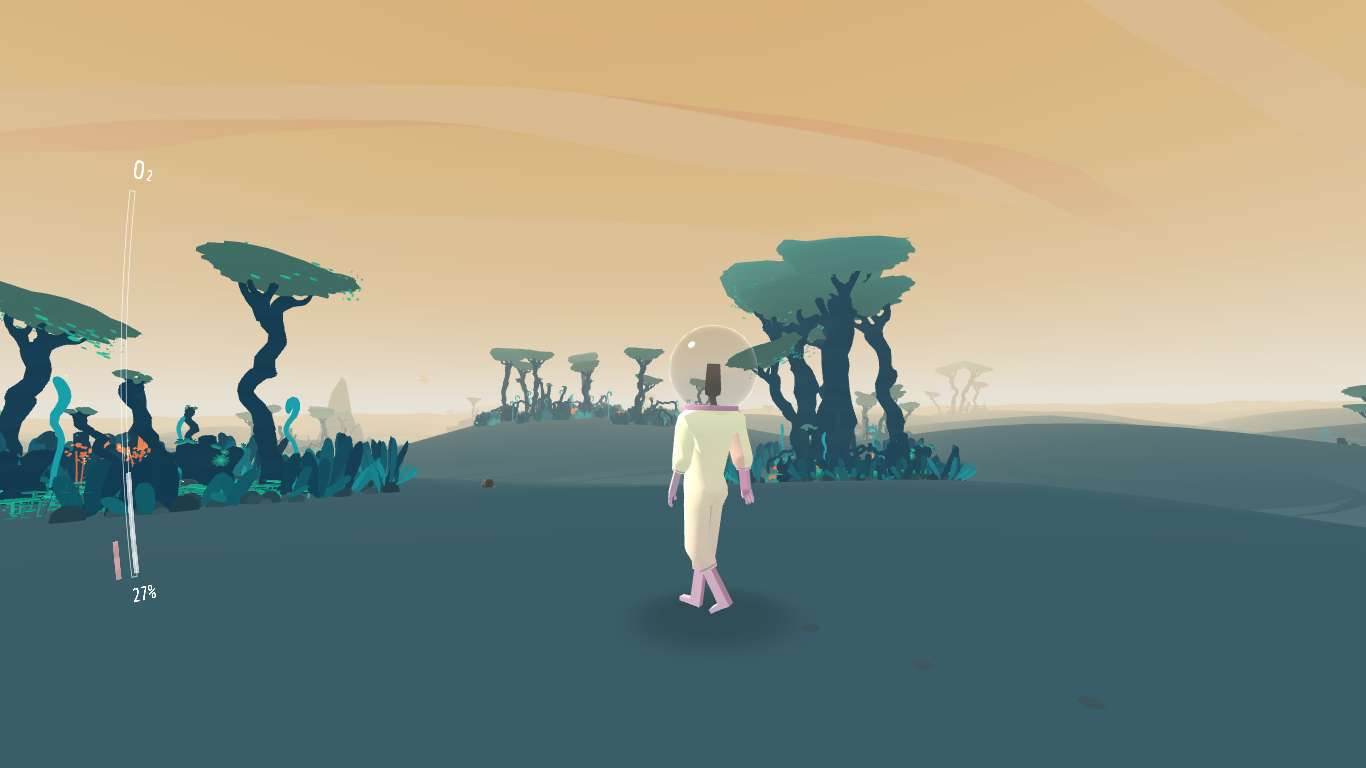 Orchids to Dusk could so easily not work. It strides a thin line between callousness and sentimentality. Too far in either direction and it wouldn’t connect. The music is crucial. Though beautiful, it is completely unsentimental. Instead, it soars, cathedral-esque, suggesting in its sweep vast and airy spaces of contemplation. The visceral moment of blooming death is crucial too, the strange buds and polyps that emerge from the corpse of the astronaut are at once weird and horrifying, gorgeous and threatening. That moment of transmutation is arresting in a way that holds rather than releases tension.

Most important, though, is the networked nature of the game. It allows you both the intimate privacy of your own death and the communality of a shared experience. No communication with other players is possible beyond the shared transformation of the landscape. Like death itself, the game is at once intimate, isolating, and universal.

Death hurts. Those we love disappear from us, leaving us with their absence, mementos and memories that slowly dwindle. Our own death hangs like a precipice in front of us, coming tomorrow or in a year or in fifty, but coming nonetheless. Orchids to Dusk is a way of talking about that experience, not with language, but with gesture. Words are meaningless in the moment of death, which cannot be spoken of, not truly. But perhaps, as this game suggests, it can be practiced. Orchids to Dusk creates a space to learn fearlessness, to process the emotion of our inevitable end in different ways. Dying is terrifying. I don’t know if the part of me that trembles at the thought of letting go of the world will ever go away. But if I must die, then dying as a garden seems like a good way to go.