Get Your Game On Wednesday: Jumpstart 2016

Happy New Year, gaming lovelies! Hopefully you had a little R&R during your holidays to game away. Now that you’re fresh and aglow, here are some resolutions (inspired by last week’s news) to jumpstart your shiny new year.

1. Help Grandma move past her love affair with Cards Against Humanity.

Yes, it’s the gateway drug for non-gamers, but it’s time to open the eyes of those to all the possibilities. Baby steps are fine and the HuffPo created this handy “if you like this, try that” list to help you out. Most of the games on the list are party games, but they are some solids in there too, like Dixit.

2. Politely call out the game industry on their WTF moments.

Life would be a lot easier if the major game companies would stop having brain farts. This week, I’m looking at you Hasbro, and not including Rey as a player token in the new Star Wars: The Force Awakens Monopoly game. The company’s lame response about the game being released in September and not wanting to give away key plots is rubbish. Rey appeared in the original teaser trailer back in 2014 and appears three times in the second teaser trailer, released more than eight months ago. So, stop telling me and all the fans and kiddos that you didn’t want to spoil anything.

And based on all our collective voices, it appears Hasbro will be including Rey in a Star Wars Monopoly game coming soon. Huzzah!

3. Be aware of people with disabilities in our community.

The challenges faced in gaming and at cons by those with disabilities often go unnoticed. This week, Elsa Henry launched a new column, Illuminating Spaces, hoping to focus on “the small, concrete things we can do as nerds to create the space for disabled gamers.”

In the same vein, developers rethought the beloved Super Mario Bros. with a twist: A wheelchair-ridden Mario moving through the level. With a little help from Luigi, the adapted game sparks thoughts on accessibility in video games. 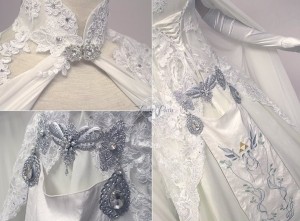 I know, I know. I’m such a LARP pusher, but it’s so much fun! Not sure where to start? Take a look at your local community center. The fine folks at the Arlington Community Center in Arlington, MA created a special school vacation week Harry Potter-inspired LARP session. How cool is that?

A no-brainer, really. If we want to see more women in the game industry, we need to help support our sisters-in-game. For example, for those not able to attend the the 2015 Indiecade, developer Jane Friedhoff recaps her panel on influences. Her original blog post was picked up as a featured post on Gamasutra too. For all those who remember, Riot Grrrl, (me! me!) the post is a must-read. Rock on!

Be sure to fill me in on all the awesome games you’ve been playing. One day I’ll move past my Fallout 4 addiction and need more games to play. That’s it for now. Until next week, happy gaming!