Why I Game: World Building, Ceramic Christmas Villages, and Township

I recently read this article via Longform (a website that curates the internet’s best longform articles, which you should be following) about this author’s obsession with his Christmas village. You know the the ceramic houses and knick-knacks that line the aisles during the holiday season? Most of them seem to hail back to a bygone era that is a strange combination of Victorian and 1950s post-war America via a Norman Rockwell painting. Yeah. That Christmas village found in hobby shops and craft stores all over America. 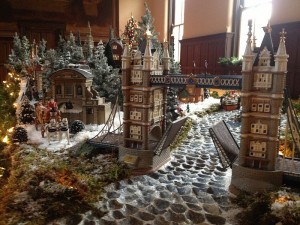 My aunt, who was a collector of many things, had a Christmas village, Dickens-style. Her and my uncle’s home was always a fantastical escape for me, somewhere away from the the humdrum of my day-to-day life, and Christmas was the most magical time of all. She went all out with decorations in every corner, and a wooden stage where a toy train encircled a stunning Christmas tree. I loved the train almost as much as I loved the Christmas village—both allowed me to create whimsical stories centered on these nostalgic artifacts.

My aunt’s Christmas village was so big that eventually she found customized wall-to-wall shelves with glass casing to adorn her office, and she permanently left the village up because putting it up and taking it down each season became such a time intensive experience. Thus, each time I entered her home, I could stare at the Dickens Christmas village. I didn’t even need toys, just my imagination, as I walked up and down the shelves, standing on my tiptoes to see better, and created stories about this little village where it snowed all year. (Being a native Texan, snow is more magical to me than burdensome.) In this village, everyone was cheerful, and child labor didn’t exist. It felt like a world where I could create my own utopia—essentially, I could be a god.

In Playing God, Richard Kelly Kemick speaks about his Christmas village with the sort of shame a heteronormative, well-educated young-ish dude would probably feel about a hobby derisively associated with “idle” senior citizens and “bored” housewives. Glossing over these assumptions, this hobby is really no different than the sort of world building that goes on with a multitude of playing and gaming. But this particular play comes with shame—a shame tied to ageism, sexism, and the Puritanical religiosity America can’t seem to ever escape. It’s not like Kemick is deliberately being an ageist and sexist asshole—it’s just that we aren’t supposed to so overtly desire to play god.

Yet, if you turn to the rise in mainstream popularity of fantasy fiction, it seems we are constantly turning to other worlds—world of imagination where contemporary anxieties and fears are figurative and battled in easier and less mundane ways—with spells, dragons, and more. Whether we seek to create idyllic utopias or enact our seemingly depraved notions of civilization on a fictional verse, it’s the heretical notion of playing god that shames us about this sort of play or the associations of it with an oft-ignored group of people. Our play becomes a furtive secret as if the multitude of us aren’t frequently engaging in “playing god” in a myriad of ways—like when I imagine myself transforming into Dark Pheonix after some asshole cuts me off in I-35 in Dallas.

This is why I game.

I game to lose myself and find myself simultaneously. What I lose myself in is usually far prettier and more whimsical than the reality, and sometimes it is dark and twisted. But it provides me a set of skills for coping with the “real world.” The world out there. Whether it’s a good book, a moving picture, a game, cosplaying, or a ceramic Christmas village, I get to create my own and develop my own worldviews—use my imagination, an organ that gets more out-of-shape the older I get.

I’ve been playing world-building games for as long as I can remember. My neighbor friends used to come over, and I would boss everyone (only child here) around in order to enact my vision of My Little Pony Faces the Apocalypse©. As a tween, I played The Sims. I learned the hacks for building my own version of the Winchester House and getting my Sims to chase each other under the bedsheets like a cat chasing its own tail (I was a horny teenager, I didn’t really advance much beyond that). Last year, I discovered Riverdale Rescue, and I am still playing Township.

World-building games are ways to engage in much needed fantasy whether that fantasy is all unicorns and rainbows or warrior unicorns who disembowel anthropomorphic rainbows with their horns. We enact our worldviews, sometimes reinforcing them, sometimes recreating them, all the while developing them. This is the place fantasy can provide us – a safe place, but not so safe as we don’t go head-to-head with metaphorical monsters. Sometimes, that’s the only place where we can face our monsters, and that’s okay.