Music Culture Composes The World Ends With You

Calling… you hear the calling…

2007’s The World Ends with You gave Nintendo DS owners a lot to talk about. It follows Neku Sakuraba, an anti-social teen who dislikes trying to understand other people, as he wakes up in the Shibuya scramble crossing with no memory of how he got there. Barriers keep him trapped in the ward’s nucleus, and he himself is invisible to the crowds around him.

Please note that this article spoils the first major twist and the ending of The World Ends with You.

Neku later realizes he has died and been transported from the Realground (RG) of everyday life to the Underground (UG), a plane of existence where Reapers roam and souls like Neku’s fight for a second chance at life. Teamed up with eccentric seamstress Shiki Misaki, Neku takes on the Reapers’ Game, a week-long series of tasks that, if completed within the given time limit, will allow players to return to life in the RG. Of course, if those tasks can’t be completed, there’s always erasure.

From the puffy shorts and zippers indicative of character designs from Square Enix’s Kingdom Hearts team, to the battle system’s use of the dual screen capability, TWEWY stood out among DS titles. What every player remembers best about the game, however, is undoubtedly its soundtrack. Ranging from dance and electronica to dubstep and hip-hop, music permeates every moment of the game. The player’s experience is Neku’s experience, ever-present in the sounds of Shibuya and the tracks flowing through Neku’s own headphones.

As the game takes place in Shibuya, home of Square Enix’s headquarters and hub of Tokyo’s most fashion-forward young people, its world revolves around trends and music. Foreign record shops have a well-known place in Shibuya, and this is reflected in the game’s setting. One of the game’s central locations is Towa Records, a take off the iconic Tower Records (American), and another shop, AMX, is a take off the HMV Record Shop (British). Though music doesn’t affect characters’ stats the way clothing and food can—offering nothing but singles and remixes from the soundtrack—record shops are regular stops when item shopping. With all the catchy tunes, it’s hard to resist collecting every track and quickly becoming buddy-buddy with the record shop salespeople. 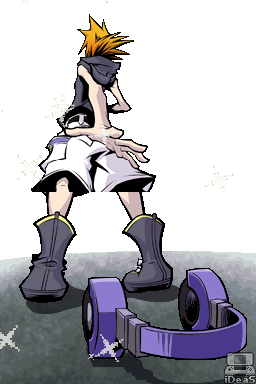 At the time of development, DS cartridges couldn’t accommodate the sheer scope of TWEWY’S soundtrack without some tricks and tweaks behind the scenes. Developers used an algorithm usually reserved for voice-over work to compress the soundtrack and squeeze even more songs into the game. The stylistic Flash-esque animation sequences of the game aren’t just part of the aesthetic; they saved space for more music. In the end, music takes up approximately a quarter of the game files.

Relationships and communication are central to the story and communicated through music. Neku’s introduction shows him putting on his chunky headphones and demanding that the people around him just shut up in his inner monologue. He even earns the moniker “Phones” from another character aggravated at Neku’s constantly ignoring him.

Players’ first impression of the world in which this game takes place is that Neku wants to remove himself from it, but once the Reapers’ Game removes him, his character development kicks in. Upon entering the game, Neku realizes that he can tune in to the thoughts of others and discovers Shibuya’s “Noise,” enemy monsters that feed on negativity. Defeating Noise in the UG influences people going about their daily lives in the RG, and as Neku witnesses people’s positivity and ability to overcome their Noise, he opens up to communicating with others. To bookend the narrative, the player’s final shot of Neku is his removing his headphones before the screen fades to the amended game title: The World Begins with You.

Visually and audibly, music is the core of TWEWY that creates this rendition of Shibuya and the people who reside in it. The game developers made sure to weave it into every aspect, from the extensive soundtrack (thirty-six tracks on a DS game!) to the very mechanics of the Reapers’ Game (the big bad of the game is known only as the Composer). For long-time fans and first-time players of the game, the integration of music establishes plot, setting, and characterization. Not to mention sweet jams for fighting Noise.