Dice Vice: The Splendor of Splendor

Instead of talking about a new game this month, I’m going to introduce to you one of my favorite games: Splendor. Splendor is a game that I’ve played maybe more than any of the games I’ve played in my new gaming renaissance.

Here’s what I love about it: it’s fairly quick to learn, like Dominion. It’s short, competitive, but not to ruin-your-family levels like “Monopoly.” And the art and game pieces are well made. I first started playing Splendor with my boyfriend in the fall of last year. I enjoyed it, but after last year’s New England Snowpocalypse, I really started to love it.

When you’re stuck inside every week when one snowstorm after another dumps feet of snow on you, after a while you’re going to need something to do. A couple of the storms where my library closed due to snow—how many were there? Three? Five? A Thousand? No one can bear to remember—my boyfriend stayed with me. After lots of Netflix, books, and, ahem, the other titillating things you can do snowed in with another person, we started playing Splendor, a lot of Splendor. Games last about a half an hour so you can get in multiple games if you have enough tea and snacks. I just found out there is an app as well, so that’s a cheaper option if you don’t have money for the game or want to play on your own.

Here’s how to play: You can play with two to four players so gather some friends. I think it works equally well anywhere from two to four, as opposed to some games where there is clearly an optimal number of players. The only thing that really changes when you add more people are the amount of gems that you put out for use. Gems, you say? Yes, in the game you’re a Renaissance gem merchant trying to make the most money! You use gems to build mines, ship the production of your mines, and encourage nobles to visit you. 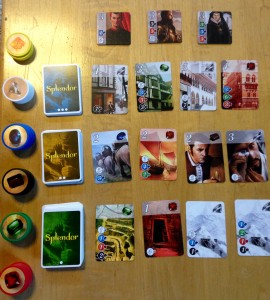 There are rubies, emeralds, sapphires, diamonds, and onyx chips that help you buy more resources of the same gem. Gold chips function like a joker or a wild.

Like Dominion, it’s a game where you are playing against other people, but there’s not a lot of direct interaction between players. The most interaction is that you may claim or purchase cards that another player wants, but mostly you are on your own. The goal is to get to fifteen points before anyone else. You earn points by buying and then building cards that have point values on them. There are three categories of cards: green, gold, and blue.

Green are the easiest and most plentiful, and some of them have points on the upper left but many do not. Generally you start building with the green cards to establish a base of mines (green cards), then try to get some of the intermediary or shipping cards (gold), before building storefronts for your jewels (blue cards). Gold cards have points and the blue cards have high point values that make them harder to acquire.

On your turn you can either: pick up three different gem chips, pick two of the same kind of gem if there is a certain amount in the stack (four if you’re playing with two people), reserve a card for later use with a gold chip, or buy a card. To buy a card you can use chips and cards.

For example, if you wanted to buy this diamond mine, you’d have to pay one sapphire, two emeralds, one ruby, and one onyx. You could use all chips or a combination of respective chips and cards. Cards that you’ve bought count for one resource. Eventually, you’ll get to points in the game when you can just purchase new cards using the resources on the cards you already own. 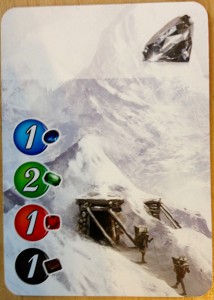 Reserving a card is a good way to keep an in demand or high value card from another player. You can have up to three cards reserved at a time and can play them on your turn when you can afford it.

The other way to get points is to get nobles to visit you. You do this by building the amount of resources listed on the cards. For example, this noble (Mother Superior) will come to visit if you if you have three emeralds, three sapphires, and three rubies. 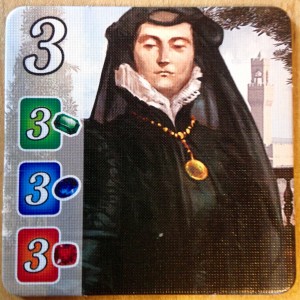 Until I was writing this post, I didn’t realize that the artist based the cards on real Renaissance nobles other than Henry VIII. Part of the fun I had was coming up with names for them. I liked to call Catherine de’Medici “Mother Superior” and Suleiman the Magnificent “Father Christmas,” but now I know to call them by their real names. Dice Vice is here for your education, friends!

All of your cards that you own are placed face up in front of you, so all the players can see what you own. This can get tricky, especially when going for the visiting noble points. It’s very satisfying to be able to beat a player to a noble. “HA! Mary Stuart loves ME! In your face!”

I still have not won a game, and it doesn’t even make me upset. I mean, sure, in the game when he gets the last noble points and wins, I grouse for a moment. I tease him for always winning, but then I ask to play again. When I play Splendor I can be that chill, adult person who can compete with friends and still manage not to be a sore loser at the end. This is a big deal for me! As I’ve said before, most of life if I wasn’t good at something, a.k.a. I didn’t “win” then I didn’t want to do it. But I love Splendor, and I never win. It makes me feel like I’ve made progress, and progress feels pretty good.