Get Your Game On Wednesday: Halo 5, Harassment, and Dog Butts

Hello, gaming lovelies! It’s one of those mornings where I’ve overslept but am still cruising the internet completely engrossed in gamer jack o’lanterns. This week has been hopping with news, so let’s get right to it!

After much anticipation, Halo 5 Guardians dropped yesterday and Bloomberg News has a fantastic article about Bonnie Ross, the head of the 343 Industries, who led the charge. You can also see photos from the Seattle launch party, complete with members of the 405th.

After cancelling two panels on harassment in games due to “numerous threats of on-site violence related to this programming”, SXSW came under rapid fire. Several media organizations, such as BuzzFeed and Vox, have threatened to pull out of the festival if the panels are not reinstated. Now, SXSW is considering an all-day event focused on combatting online harassment. More information is expected later this week. 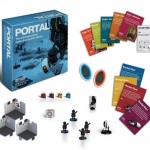 Is the cake a lie? Find out in Portal: The Uncooperative Cake Acquisition Game

Now available from Cryptozoic, Portal is now playable as a tabletop board game. The game’s release dates were a tad squishy, scheduled sometime around late September but ship dates in October from some sites, but it appears fully available now.

A dog butt game controller that’s more than it seems

Butt Sniffin Pugs by SpaceBeagles Production offered a hands on play experience at this past weekend’s IndieCade. Although the game itself sounds like a crass joke, the design behind the game’s controller is one that the company hopes will help differently-abled gamers play more games.

That’s it for this week! I’m trying hard not to buy yet another cat card game (but I’m collecting them now!) If I do, you’ll be the first to know. Until next week, happy gaming!