Guilty Gear is a fighting game series that began in 1998. Guilty Gear: Xrd SIGN came out in 2014; with a pachinko game and a free-roaming melee-action title also in the bag, the franchise is going strong. In the two-dimensional Street Fighter mould, the main games star two serious men with a rivalry—one blonde, one brunette—who secretly love and understand each other.

But unlike Street Fighter, it has an evolving story, and elaborate worldbuilding, and really cool character designs. They retain the graphic solidity of SF, but add the hip swagger of King of Fighters, and a rock sensibility that game-runner Ishiwatari Daisuke reinforces with elaborate metal theme tunes and a band-reference naming scheme. Heard of Venom, Testament, Slayer, Zappa? Well, they’re characters now. How about Meliah Rage, Cloudberry Jam, Shiina Ringo? There are greater and lesser name-plays to spot, which is fun for fans and word-nerds, and impinges not at all upon the gaming experience for those with no interest in fierce guitar solos or symphonic echo.

Guilty Gear is a favourite of mine. I was captured by graphic showmanship, further enticed by the fantastic soundtrack, and finally cemented as a fan with the pretty great showing for its women. There are parts that I hate—Johnny’s a bit of a Sergey Wang, Millia keeps being dragged back to those boring Assassin boys—but on the whole it’s approaching transcendent. The gameplay’s demanding but while there are fairly elaborate rules, they are at least clearly defined. It’s possible to “learn how to play” Guilty Gear, if you’re so inclined, and watching a match between experts is a treat. But I want to talk to you about great visual design! So let’s get down to that.

I-No is a sexy witch.

I have no bad word to say about her, though I reserve a qualm or two for her designer. I-No is a final boss and playable character, and of a great cast, she’s one of my faves. And one of contributor Amanda J’s faves too—she caught my attention calling I-No her unproblematic fave. Which really felt like a good catch.

We had a think about why that is. 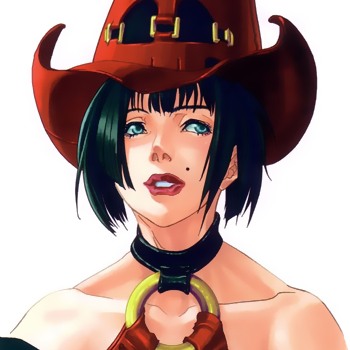 Claire: I feel like her being ALL red is helpful. It’s very cohesive and suggests that she is designed to look as cool and solid as everybody else, as well as having no shirt on. It’s also very aggressive, a DANGER COLOUR. It’s classic femme fatale stuff, which at this point is code for Of Course You Would F— Her, but you know how every now and then someone will make a big deal about how “actually men HATE red lipstick! They’re afraid of it!?” I-No looks like she’d eat you and suck the bones dry.

Amanda: I-No’s blue guitar (I’m estimating that it’s supposed to look like a typical Les Paul, but since the knobs are inside of the pickguard, a typically Fender or Rickenbacker trait, we’ll just suspend disbelief. Headcanon: I-No’s guitar is a classic Gretsch White Falcon painted iridescent baby blue) is the perfect accessory. And when I say “accessory,” I don’t mean it’s just there for show. My favorite I-No victory pose is the one where she finishes with a blistering solo (actually it’s just a bunch of hammer-ons and pull-offs that anyone with some practice can master BUT HEY). The calming color of her guitar really sets off the rest of her severe look. It fits because it doesn’t fit.

Claire: You’re right. She’s like a neon poison fish. The clear electric bright of Marlene (of course the guitar has a name) cuts through the sticky red, it’s incongruous, which is a neighbour to unsettling. Nothing—well, much less than you might assume from a written description—about her makes lechery particularly easy.

But why is it so charming to me that like 50% of I-No cosplay has added bustier bits? On the one hand that makes it clear that the character design is less than 100% “reasonable.

Amanda: This is absolutely because Daisuke Ishiwatari, like most character designers, has a limited understanding of a woman’s body. It’s either that or they’re just more willing to give in to fantasy over reality. You know, in a fighting game where there is nothing but high-fantasy elements.

Claire: It’s true. Her victory pose where she whips off her jacket (in the GIF gallery above) is just… literally impossible, unless her arms aren’t solid. “She wears black leather choker around her neck with a gold ring that is connected to her shoulderless red jacket that she can easily take off and put on,” says the Guilty Gear wikia, and that’s just totally wrong. It’s incorrect. And the loose flaps of the front of her jacket would not stay covering her nipples. Maybe she uses magic? I’d like if that was actually put in the story. Then again, her boots fit so realistically, and that makes her seem more like a reflection than an idealisation.

And on the third hand—people, women, love her so much they just go ahead and add spare bits to make her sex-witch costume reel back into their comfort zones. I feel like often with very small, gappy cosplay, there’s a sort of invisibly enforced bravado amongst cosplayers; this is canon, so you have to do it that way. A sort of constructed nobility about it. Kill la Kill philosophy? I’ve certainly gone back and forth on whether or not I’ll do an outfit because it’s way briefer than I’m comfortable with, and erred on the side of “no” because I’ve not been so invested in the cosplay that I can build up the performance bravado to redesign it with my own public comfort in mind. I’ve been averse to the possibility of being challenged or invalidated as a prude, I suppose. There’s a lot of prude-vs-empowered floating dialogue it’s easy to get tangled in, around cosplay. So to see multiple I-Nos making I-No-Prime’s outfit conform to their own comfort standards—!

I-No’s philosophy is “do wot I want;” these cosplay redesigns are true to the gist of the character without being slavish to others’ descriptions of her. I know it’s strange to suggest that the character has any life that wasn’t breathed in by her designers, but…if we don’t believe in magic even a little bit, why do we care about fiction at all.

Amanda: Isn’t it odd that “sexy witch” is so embarrassingly played out as a costume, but “sexy, super cool, evil, will alter-space-and-time-to-get-her-way rock-n-roll witch” is great and necessary. 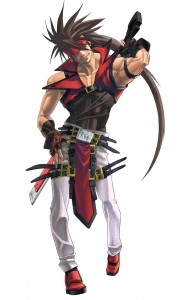 Claire: So how do you feel about (brusque, loner main character) Sol? Do you like Sol? I think he is a berk, which is why I so enjoy how much I-No discomforts him. She tends to greet him as “shithead” in the English translations. I hope it’s not even due to a Secret Plot Event, I hope he just feels bad when she’s there.

Amanda: A large part of my love for I-No stems from the fact that she never seems to get intimidated by male characters. Even though Sol’s known as the Relatable Anti-Hero, I-No constantly makes him aware that he’s not in charge here. And I-No’s verbal jabs at Sol endear her to me even more! I’m sure his feelings of discomfort are For Reasons to Be Explained (or slightly gleamed upon half-assedly). Sol is okay. I don’t think about him too much. Faust terrifies me.

Claire: Ugh I hate Faust! He’s a serial killer. I guess that maybe I-No is, too; she’s certainly a villain. But I want her around anyway. She’s got such a lot of (NO LAUGHING) spunk.

Amanda: Yeah, but Faust doesn’t have the panache and even-temperedness (thanks to her voice actress’s dulcet tones) that makes I-No more palatable. She’s mad, yes, but at least she’s cool.

Claire: I think I could sum up by saying that we love I-No because she has enough to her, enough written and animated in, that she seems counter-compliant enough to produce the illusion of agency. We’re both real people. We know that some people always, and lots of people sometimes, just want to be really rude to tough buff men and frighten them with tittery.

There are still ways we can criticise the creative decisions around her (for example, the way she’s repeatedly, boringly punished in her endings) but there’s enough character informing the design that I don’t feel shortchanged; given a sorry wank puppet from a shuffly, excuse-me loser perv instead of a viable fictionalised human to follow through a narrative. I-No is a Lil’ Kim for fighting games, if that’s not too weak a showing for Lil’ Kim? It probably is. But I-No still matters.