I’m obsessed with stories about young women, particularly young powerful women. Comics and movies seem to be enjoying a surge of magical girl stories, but mainstream gaming hasn’t quite caught up. Though it’s better than it has been, it’s still no girl game movement. However, indie gaming, like usual, is the place to be. This is definitely the case when it comes to visual novel We Know the Devil, a story about three friends trapped at a surreal religious summer camp.

We Know The Devil

Disclaimer: Date Nighto provided WWAC with a review copy in exchange for a fair and honest review. WWAC Member Jo Fu works with Date Nighto, but had no involvement with this review.

Some of the best minds in indie gaming came together to create this creepy treat, and it worked so well. The story is about three characters, Jupiter, Venus, and Neptune who are teenagers. They’re “bad kids” who have been sent to a seemingly Christian summer camp for past transgressions. They are antagonistic toward one another in that way that often leads to friendship between teens, and aren’t afraid to provoke one another into sharing the dark and scary parts of their identities. 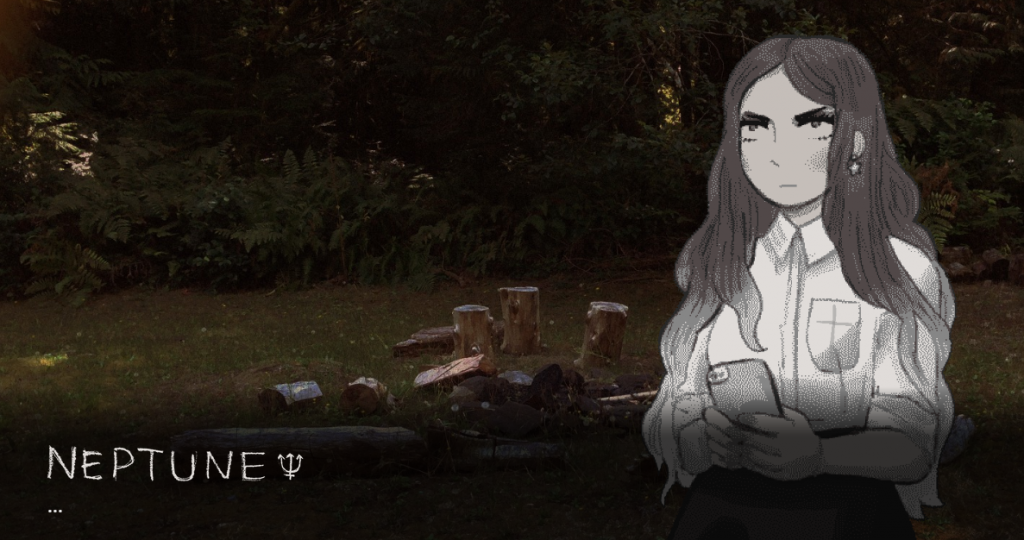 “It was important they had both reasons to like each other and reasons to dislike each other, things in common that the other one didn’t have. I guess I thought a lot about how groups of my peers worked at that age, how differently you act in front of a small group than everyone. But also there were different reactions to damage and trauma I wanted to get across; Jupiter’s passive acceptance, Venus’s passive-aggressive acquiescence, and Neptune’s aggressive resistance.” 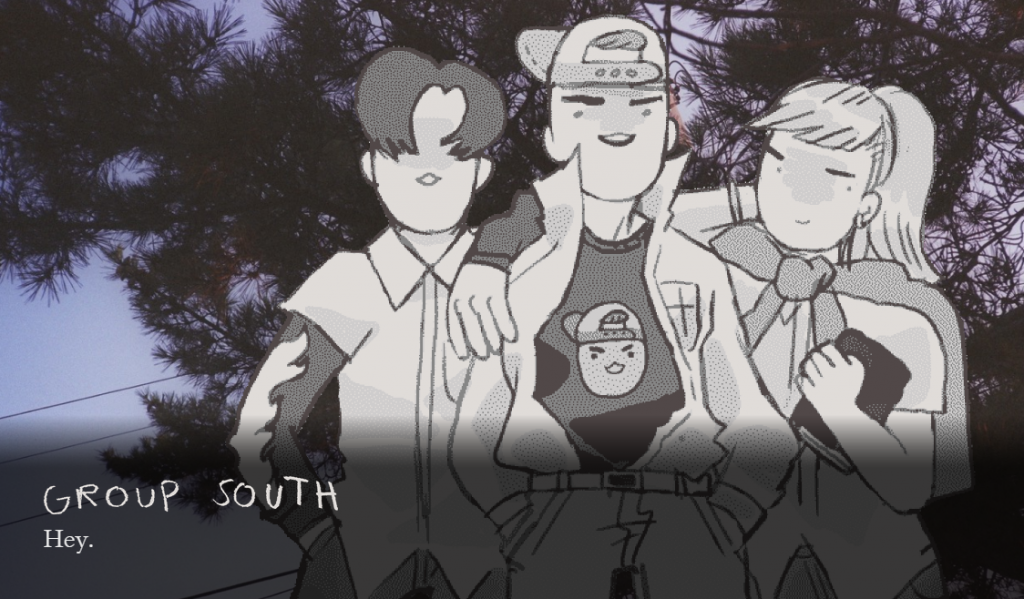 The others — just pupils

The art is a great representation of each character. Venus is often cross-armed, eyes wide, mouth small, cut off from the others. Jupiter seems to have more movement, hair fidgeting, and general slouchiness. Neptune has her sleeves rolled-up, ready for a fight. I adore this simple art, the careful depictions of these people.

We spend most of the time watching these three characters, but we do meet a camp counselor and some of the other campers. These teens are drawn differently, honestly they’re pretty creepy.

When we meet these three teens they’ve already known each other a while. We come into the story toward the end of their time at camp. Personally, I’ve never been to camp (as a child), but I’ve done similar things and if this is anything like my experiences, the last few days are always the moments most fraught with emotions. Suddenly there’s a mad dash for bonding, or escaping. The last days were always when Spin the Bottle occurred and feelings were confessed in breathy rushes. 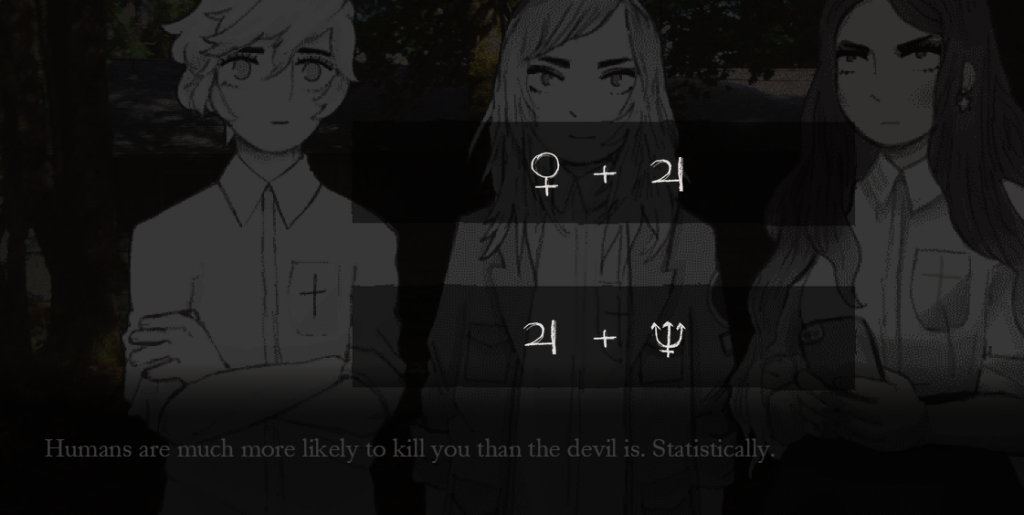 It is in these last, urgent moments that you as the player must make all sorts of decisions. The choices are always in twos. Which two characters head off into the woods alone? Or the cabin alone? Or Seven Minutes of Heaven? How do you decide who gets left out? And that’s the power of We Know the Devil and perhaps the power of the devil himself. In the moments of isolation the devil slips in. 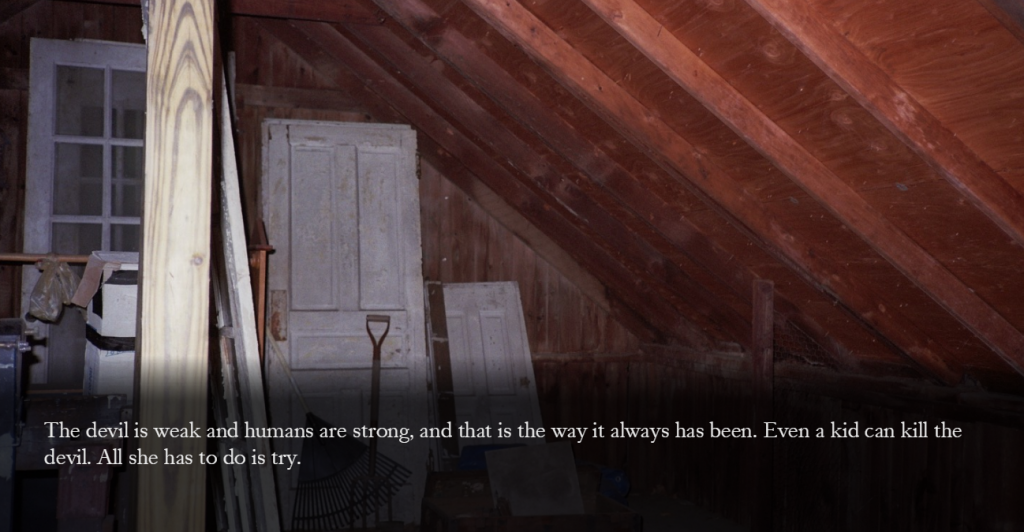 “The devil is weak and humans are strong, and that is the way it always has been. Even a kid can kill the devil. All she has to do is try.”

This of course provoked a lot of feelings about my own life. My best friends and I form a triad. Who gets left out? Who feels separated from us, lesser than, and when? Is there a way to avoid that? We Know The Devil suggests that while the devil is always lurking, there are methods of survival. If we read the “devil” as isolation, as loneliness, as fear then learning to survive these things really is important. Friendship or love really can be a conquering force.

There are supposedly four endings to We Know The Devil. I’ve gotten three, but haven’t managed to unlock the fourth. There’s a lot to this story I haven’t told you because I want you to play it. It’s short, affordable, relatable, and offers a lot to the gaming world. Games can be meaningful and can teach us not only about ourselves but about our relationships.