Here are the games that will be keeping us busy this month. What are you playing? 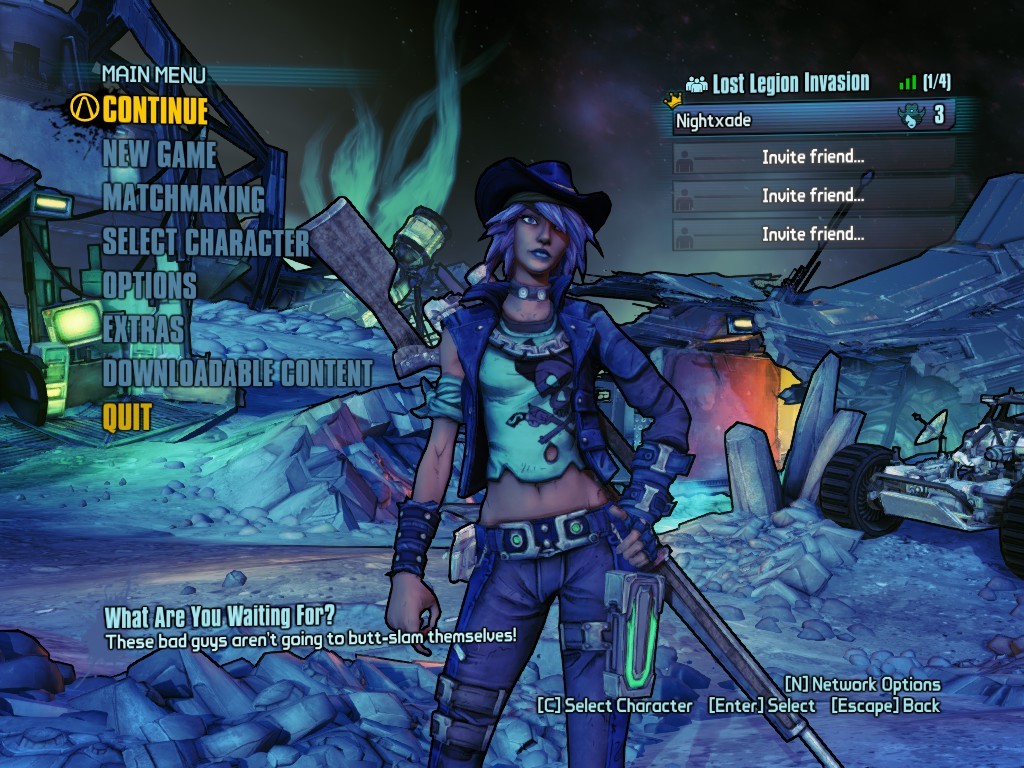 I tried the original Borderlands game a few years back but got tired of the grind. I appreciated the gameplay and the way the story is parcelled out through discoveries as you proceed, but the constant fetch quests got tiresome quickly so I set the game aside. Recently, peer pressure, a Borderlands Humble Bundle sale, Jo’s game diary, and this piece on Lilith and scary, magical women, inspired me to get back into the series. I have no regrets. Mounting up as the murderous vault hunter named Nisha, I’ve been getting my headshot on as we roll back through the villainous Handsome Jack’s rise to power. Turns out, he wasn’t quite so villainous after all. In fact, he is quite the hero. Sort of. At least, he’s pretty sure he’s doing the right thing. Which is one of the great things about this series: no one is a hero and no one is truly a villain. But everything is hilarious. Well, everything except a lot of the character back stories that you can pick up as you go along. As a fan of gaming lore, I love finding out the little tidbits, but I appreciate the unique way this game presents its lore. Not interested in Nisha’s domestic life? You don’t *have* to listen to that ECHO you just picked up on your way. Oh and about that–a lot of the characters come off as psychotic in many ways. Video games often don’t handle mental illness and trauma particularly well, opting for the more simplistic approach of crazy = evil homicidal maniac. But Borderlands, with these pithy pieces of information, spell out the lives of its characters. No one is good—not even the characters you’re playing as—but you might be a little more sympathetic when you learn about Jack’s wife and child, or Wilhelm’s illness.

Thanks to the Humble Bundle sale, I have all of the Borderlands games and now plan to play them all to learn more. I am especially interested in Tales from the Borderlands. Telltale Games creates amazing interactive stories based on various established series. Borderlands’ off the wall storytelling doesn’t seem like it would fit, but Telltale knocks it out of the park. I mean. Seriously.

I have now joined the future! Destiny saw the beginning of Year 2 with the release of their third expansion, The Taken King. With this came the release of a new special edition PS4—and I GOT OOOOONE! It’s so shiny, excuse me while I lick it and drool all over it for a bit. The console comes in a cool arctic white (all of the puns!), with metallic gold and subtle silver embossing on top. The system comes with one arctic white controller, a copy of Destiny, and a code for The Taken King expansion. As such, you can guess what I’ve started to play. I’ve rolled a Hunter, as the Bladedancer class it unlocks later appeals to me with a controller-based FPS. I am decent at FPS with as mouse and keyboard—I am, lamentably, less than stellar with a controller. I know people say “practice makes perfect”, but seriously—I’ve been trying to place FPS games since the Halo: Combat Evolved days. It’s just not something my hand-eye coordination does well. But that won’t stop me from trying!

Those who buy The Taken King expansion get a special item called the Spark of Light which unlocks any character to level 25, the requirement for the new expansion. I decided, however, to go it the long way so I could get used to the game and its control.

The new expansion was accompanied by a patch for all users as well which shows Peter Dinklage’s role as Ghost replaced with the ever-present Nolan North. There was some negative reactions to Peter Dinklage’s portrayal so the decision was made to replace his part from Year 2 onward. I’m a bit sad that I didn’t have a chance to hear Dinklage’s take, but North is always a familiar comfort (though now when I watch/play Uncharted, I hear every other role he’s played rather than just Nathan Drake).

I’ve not gotten very far into the game and it will probably be slow-going thanks to my FPS-controller ineptitude, but I am enjoying it so far. It really throws me back to my days of playing Halo, while giving me the pseudo-MMO feel of customisation and social hub that is The City. I just desperately wish there was a PC version as well! 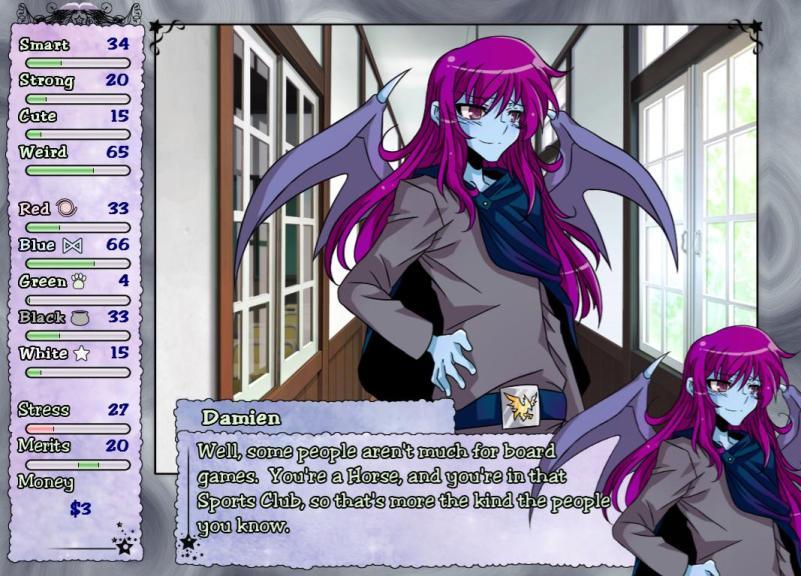 For the first time, Steam recommended a game to me that actually fit my interests. Having already played Hanako Games’ Long Live the Queen, and being in the mood for both magic and dating sims, I settled into Magical Diary: Horse Hall with glee.

As a kid, I remember wanting a Harry Potter game where I could create a character, attend the school, go to class, and spend time with friends. Magical Diary is like that—but way better than what I imagined. Your protagonist is a first year student at a school for learning magic and is placed into Horse Hall with two roommates named Virginia and Ellen. While at the school, you will decide which classes to take, use your magic in exams, and pursue romance and friendships with your fellow classmates.

I’m a big fan of visual novels, dating sims, and fantasy, so this game was perfect for me. I started off my first playthrough making decisions that I personally would choose, and I had to laugh when I found out my romantic entanglement with a certain boy was going to be destructive; by the end, he reminded me of one of my ex-boyfriends. I won’t spoil who this character is or what he does, but the game uses his actions to talk about consent. A professor in the game takes several moments in the game to discuss the importance of consent in a relationship and how to practice safe sex and to talk to her about using a kind of magic for birth control. I expected nothing of this going into the game, and I am so glad it’s a part of it.

All of the characters in Magical Diary are written in a way that makes them believable. I fought with my roommates in certain situations (especially when they were worried for my well-being when I was dating Mr. Bad Boy), and the other classmates have much more going on with them than what you can see at a first glance. I ended up playing through every romance route so that I could learn about the other characters in the game, including characters who weren’t people I could date but would learn more about by simply being in more situations together. You can date women, you can date men—you can date a demon. Hell, you can sort of date a teacher.

Each color of magic has a different function. You’re encouraged to learn at least a little of each to understand what kind of spells to anticipate learning in each, which is great for figuring out what kind of magic to focus on. Exams take place in dungeons at the school, and you must use your magic to find and reach the exit to make your escape. Sometimes this means using magic to examine your surroundings, to teleport aggressors away, or to move objects. There are always multiple ways of passing an exam, but failing them isn’t so bad. You end up gaining demerits, but for most of the romance routes this does not cut you off from important narratives. In fact, for a certain romance, you’ll want to find yourself in detention a few times…

Magical Diary is the most interesting fantasy-themed dating sim I’ve played. I only wish there were more to play! Time to get back into Long Live the Queen.